Young Scientists at #LINO70: Daniel...
Back

Young Scientist Daniel Reiche completed his doctoral thesis at the Humboldt University in Berlin in January 2021. There, the theoretical physicist continues to deal with questions from basic physics research – which he sometimes even turns upside down.

At school I got good grades in Physics, but I also had other interests such as literature or history. However, in physics there were still a lot of unanswered questions that I wanted to investigate at university. The first semesters were exhausting, but I did not stop until the increasingly interesting questions of theoretical physics did not let me go. After completing my bachelor’s degree at the University of Jena, I went to HU Berlin for my master’s degree. I conducted my PhD work at the Max Born Institute for Nonlinear Optics and Short Pulse Spectroscopy, where I am continuing my research since my PhD defence in January 2021. 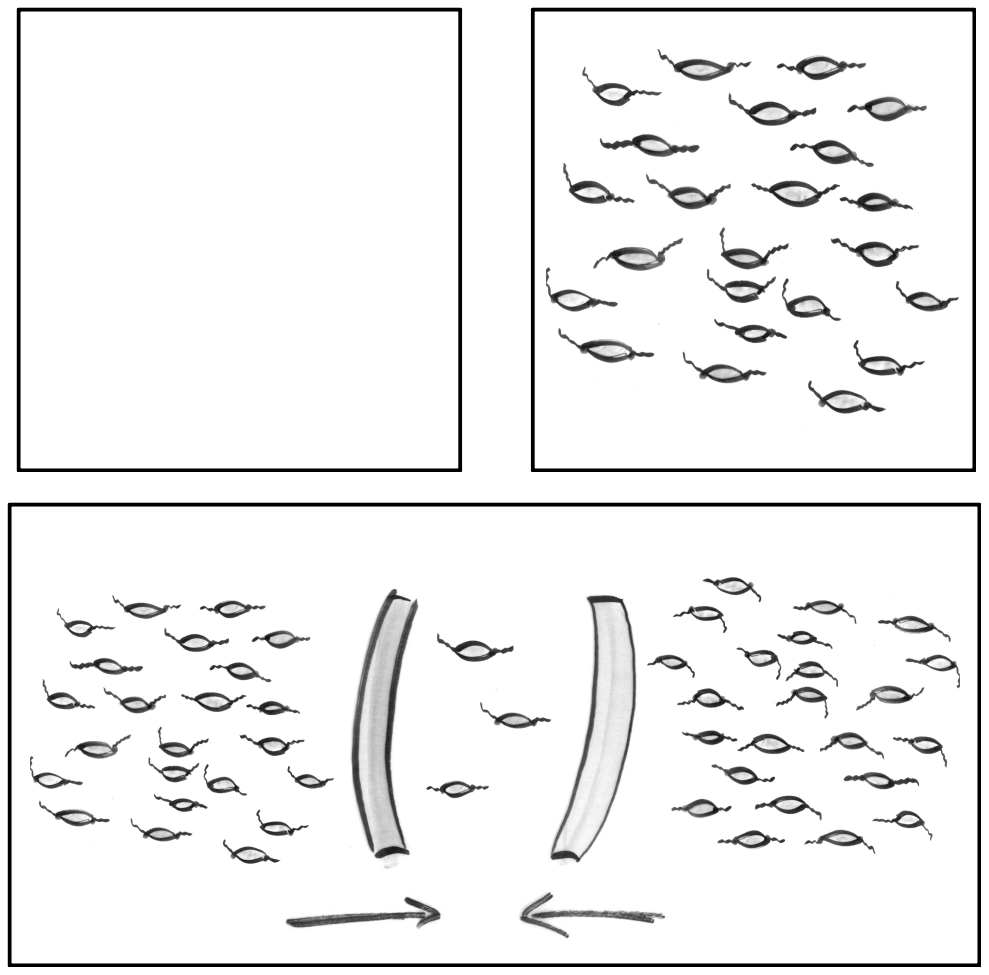 Visualization of the concept of vacuum from the perspective of modern physics. Top left: Classically, vacuum describes the absence of everything. Top right: Physics predicts virtual particles that exist even in vacuum. Bottom: The vacuum is modified by the presence of bodies and can lead to macroscopic forces. Photo/Credit: Courtesy of Daniel Reiche

In my PhD thesis entitled Long-time correlations in nonequilibrium dispersion forces, I dealt with the revision of a theoretical model that violates certain thermodynamic principles when studied in greater depth. In technical terms, I explored the dynamics of open quantum systems in both equilibrium and nonequilibrium situations. So far, the “communication” between a microscopic particle and a complex electromagnetic environment has only been studied to a limited extent. This  resulted in the loss of important information which can sometimes be crucial to understand the dynamics of moving systems. More generally, if you look at the interaction between particles and objects on tiny scales, you will discover that even in the vacuum between them there is a lot going on. There are immense forces that are mediated by this nothingness that affect physical models.

The Smaller, the Stranger

With the theory that we developed at our institute, we can explain why some of these forces not only double when the number of interacting bodies is doubled, but can increase by some orders of magnitude. It’s as if you were carrying a shopping bag of ten kilograms, buying another bag of ten kilograms in the next shop – and suddenly carrying 500 kilograms. Fortunately, that doesn’t happen in our daily life in the supermarket, but it does if you dive into dimensions that are less than micron size – much smaller than a human hair. The smaller the particles and distances, the stranger the observations you can make. 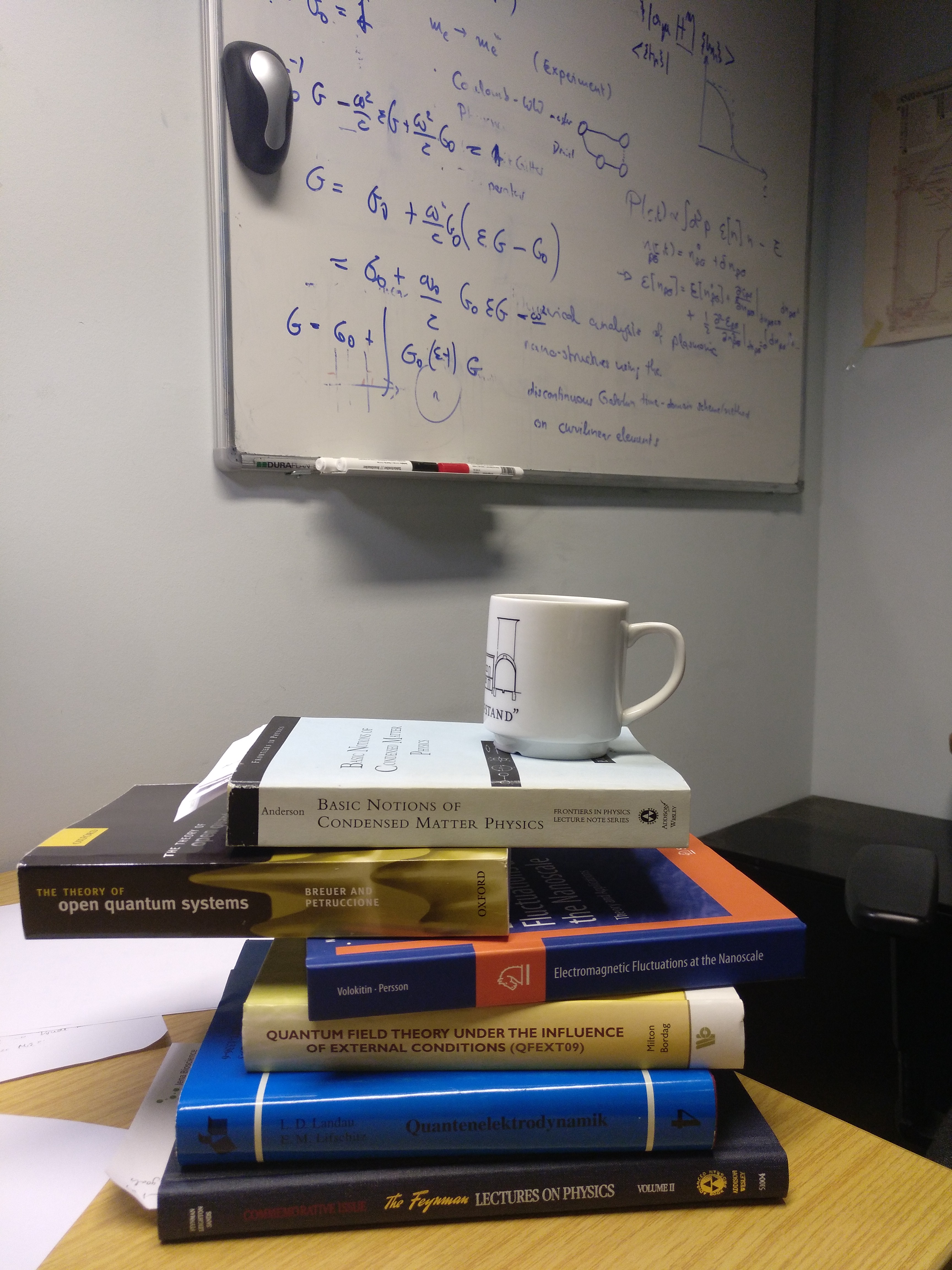 A blackboard, literature and a coffee mug, that’s what Daniel needs for his work as a theoretical physicist. And he is looking forward to discuss topics in person with colleagues. Photo/Credit: Courtesy of Daniel Reiche

As a theoretical physicist, I basically only need paper and pen for my work, but the exchange with other scientists cannot be overestimated. Incubating ideas together on a blackboard is a very important aspect that cannot be fully reproduced digitally.

I am looking forward to the times when encounters with colleagues are possible again. Until then, despite the pandemic, I will be able to conduct my research from my home office, also when collaborating on an international level. For example, I regularly collaborate with colleagues in the USA and recently was able to finish a project with a student from Glasgow who actually was supposed to spend a few months in Berlin.

But I also like to exchange ideas with scientists from other disciplines, so I am happy to be part of the interdisciplinary 70th Lindau Nobel Laureate Meeting in summer. During the Online Science Days 2020, I presented my research in one of the Next Gen Science Sessions and I learned a lot beyond my own box. For example during the sessions about the coronavirus in the context of social inequality and poverty. That is why I am looking forward to get in contact with new perspectives when I participate this year.

Within the next months you will find more young scientists who are selected for #LINO70 on the blog to learn more about their career, their research and their plans for the future.

Further articles in this series:

Jayeeta Saha about A Green Pathway to Generate Hydrogen

Robert Mayer about The Prediction of Chemical Reactions

Daniel Reiche conducts and teaches theoretical physics in Berlin after completing his PhD project about long-time correlations in nonequilibrium dispersion forces. He presented his research about the vacuum during Lindau Online Science Days 2020 and will participate in #LINO70 in summer 2021.