Laura in front of the ATLAS detector at CERN. Photo: Laura Pereira Sánchez

Laura from Spain is a PhD student at Stockholm University in Sweden. She works in the ATLAS collaboration analysing data from the high energy proton-proton collisions of the Large Hadron Collider at CERN. Laura is currently searching for some particles predicted by a theory called supersymmetry. Enjoy the interview with Laura and get inspired:

I have always been interested in math and science but as a young girl I never thought I would become a scientist. During high school, I became a Rotary Youth exchange student and lived in a small town in the state of New York for one year. There, I took a physics class and one of the activities our teacher made us do was to google chemists and physicists who had made breakthroughs in their fields. I remember realising that most of them were men, except the great Marie Curie, of course. It was in that moment that I told myself that some day I would like to be one of them, to show that women are also brave and smart enough to do science. After some years, I realised that there were already many women who had done fantastic scientific advances and discoveries. However, they have often been shadowed by men.

I don’t really have many role models. However, I have to admit that I admire my current supervisor, Sara Strandberg, for being such a successful researcher while having a very healthy work-life balance. I hope one day I can reach something like that.
In addition, I really enjoyed reading the book ’17 Femmes Prix Nobel de Sciences’ by Hèléne Merle-Béral. This book, published in 2016, is a compilation of biographies of the women who won a Nobel Prize in the natural science disciplines to that date. It was extremely inspiring to read about their lives and achievements under such hard and sexist conditions. For that reason, I admire all of them. 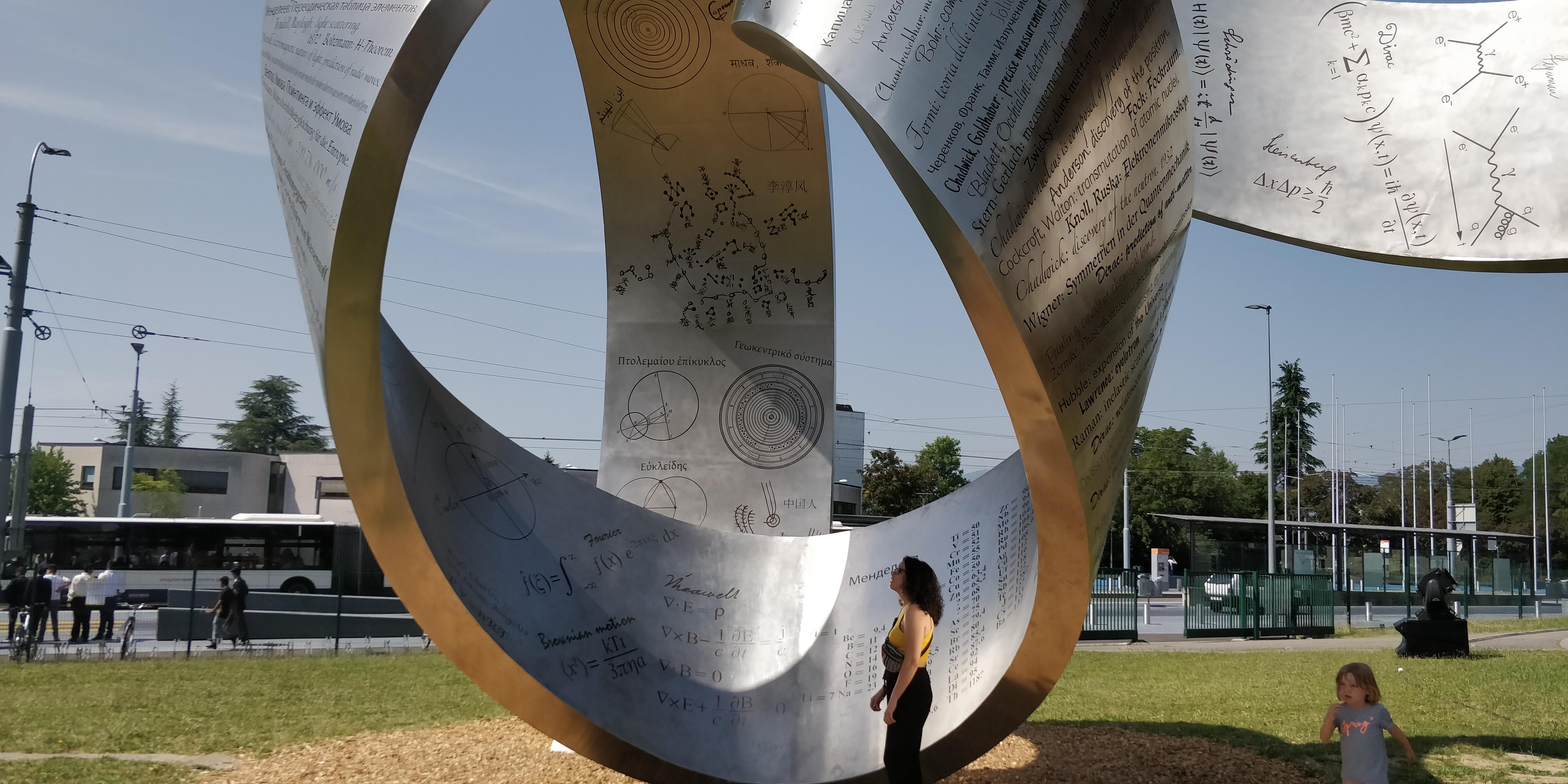 Laura at CERN after her master thesis doing a summer internship with the ATLAS group at IFAE. Photo: Laura Pereira Sánchez

Every new project I take up feels cool to me. I love what I am doing and learning new stuff. Therefore, every time I take up a new project, I find it extremely cool. Among all of them, the coolest projects I have worked on are definitely the projects in the ATLAS collaboration.
During my master programme, I measured the decay of a top quark, to a Higgs boson and an up-type quark. This decay is forbidden in the standard model at tree-level, which means that it is very unlikely to occur. We are indeed not sensitive to these events yet, however, several theories beyond the standard model predict this decay to occur more often. This means that if we were able to measure it we would indeed be able to say which of this theories beyond the standard model actually match with the reality and which don’t. I found this analysis extremely interesting because in the final state, I worked on, where the Higgs decays to a couple of bottom quarks, we were severely limited by systematic uncertainties and a smarter, new approach was needed to improve our results. This has actually been my first article in a scientific magazine. It was published at the end of May in the ‘Journal of High Energy Physics’ and I am extremely happy that my name appears in the authors list.
Currently, as part of my PhD, I am searching for the supersymmetric partner of the top quark. This is a very different type of analysis, where we directly look for signatures of one of the theories that could replace the standard model, the most accepted and tested theory at the moment. Discovering any of the particles predicted by supersymmetry, which are not predicted by the standard model would definitely be a great scientific breakthrough. However, up to the moment we have only been able to exclude several models and different mass ranges for the predicted particles.

What’s a time you felt immense proud in yourself / your work?

More than a year ago, I was finishing my master thesis and my supervisor offered me the opportunity to continue working with the ATLAS group at the Institute for High Energy Physics (IFAE) at the Universitat Autònoma de Barcelona (UAB). This meant that I would keep working with CERN. Working at CERN had been my dream since my last year of high school and that this dream finally became true made me incredibly proud.
Furthermore, I honestly felt immensely proud when I was chosen to participate in the the 69th Lindau Nobel Laureate Meeting. Many young scientists apply to take part in this meeting and being selected made me extremely happy. It felt like my hard work was appreciated and that was the best feeling ever.

I would love to discover or measure something new which is practical and useful for society. High energy physics has already seen its ‘golden age’ which culminated in the discovery of the Higgs particle in 2012. Unfortunately, I was too young to participate in that discovery, but I would love to be able to take part in a discovery of similar importance. Every time we exclude a model, or masses in a theory like supersymmetry, we are helping science and learn more about the Universe we live in. But in my opinion it always feels better to discover something that actually exists, than to exclude something that doesn’t. 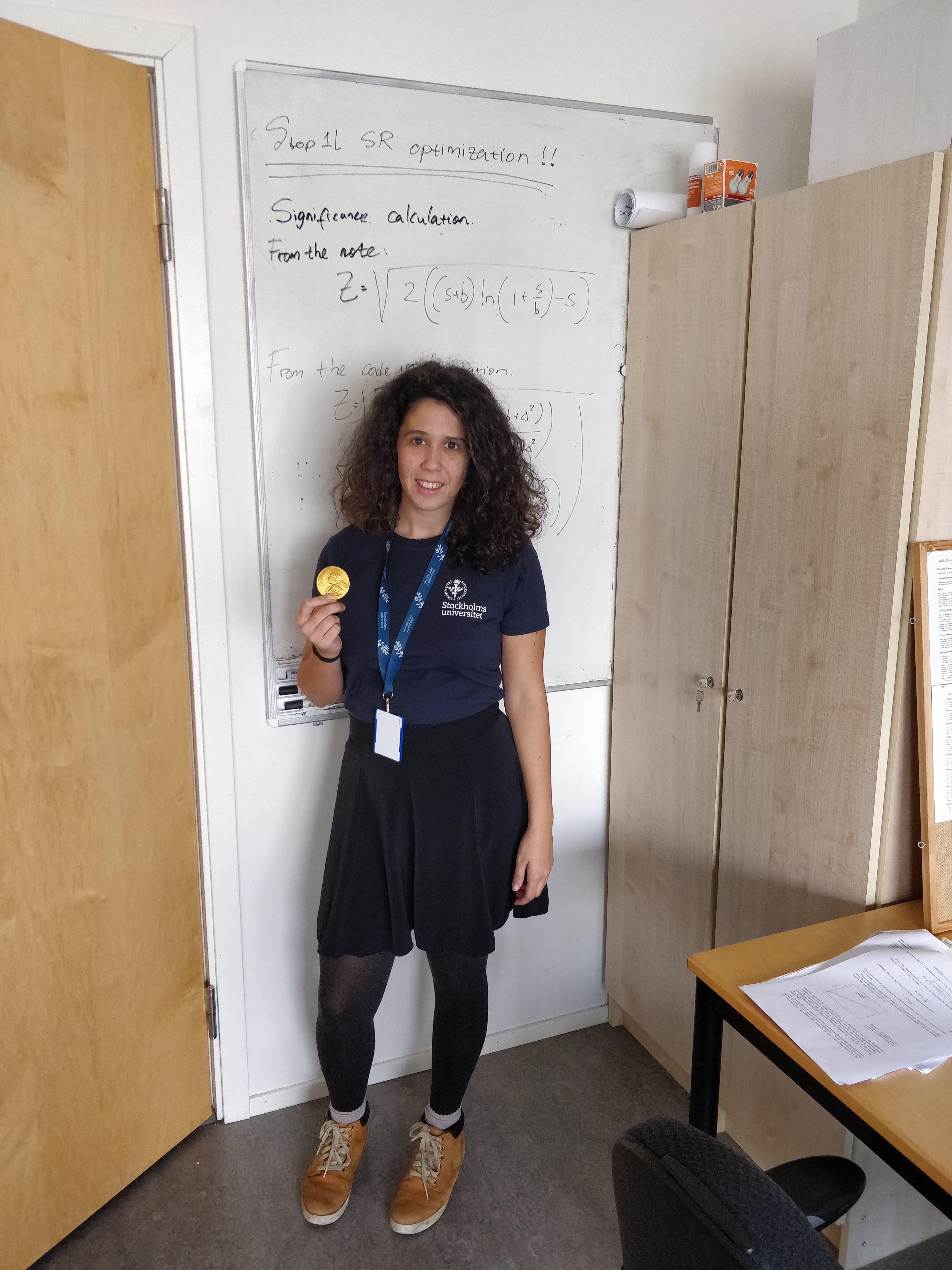 Ready to participate in an outreach event of the faculty of physics at Stockholm University to encourage kids and teenagers to study physics. Photo: Laura Pereira Sánchez

I like dancing and going to the gym. Since I moved to Sweden, I also enjoy hiking whenever the weather allows it. For me it’s extremely important to have fun with friends, to exercise and enjoy my free time so that on the next day I can go back to work filled with new energy.

Don’t be afraid of adventuring yourself in a field that is mostly associated to men or that people usually categorise as ‘too difficult’. Don’t let anyone tell you that you are not good enough. We are all not genius or eccentrics but very normal everyday people. If you find physics or science interesting you should definetly try to explore it. Science is a very rewarding field in which you will never stop learning something new. If you already know that you want to become a researcher, I would advise you to offer your help in the lab of your professors or apply for internships at any institute you are interested in. Practical research experiences are extremely important; they will help you decide if a PhD is a good option for you and they will make you become a much better candidate to get hired for an academic position.

I think there are several approaches that should be done. To start, many girls don’t want to choose science because of the stereotype that scientists are crazy old men. We should let young girls explore and satisfy their curiosity, showing them that they could also be scientists one day if that is what they dream about. Every girl can be good enough and smart enough.

Furthermore, I think it is very important to help women who have already chosen an academic path to be able to stay on research. For that to happen, we have to not penalise women for being mothers. It often feels like men can have both, a great career and a family. In practice, we should make sure that maternity leaves are taken into account when evaluating a candidate for an academic position. I personally would dream further and hope for a future in which both men and women can spend time with their children. No gender should be penalised by an unequal parental leave in his or her career because of the personal relationship to their children.