#LINO19 young scientist Quazi from Bangladesh is a master student at the University of Dhaka in Bangladesh. The efficiency of conventional silicon based solar cells has significantly improved over the last decade or so with light trapping nanowire arrays replacing planar surfaces. Quazi’s research group aims to understand how a reduction in surface reflectivity, caused by the nanowires, contributes to increased current densities and modulation of carrier generation profiles inside the silicon substrate. Her role is to model these nanowires in finite element software in order to analyse how light interacts with these nanostructures. A better understanding of the underlying physics can lead to optimum surface texturing resulting in more efficient solar cells. Enjoy the interview with Quazi Rushnan and get inspired:

When discussing the applications of electromagnetism, my high school teacher told me to investigate the physics behind a credit card swipe. On a mission, I went home and started researching the topic. I was awestruck by that fact that the technology behind the black magnetic stripe on a credit card was derived from basic principles I learned in class! I was amazed by the impact this intricate fusion of physics and engineering has had on the way we transact money. From then on, whenever my dad paid the restaurant bill, rather than fighting over the last piece of pizza, I would stare at the card reader slot and visualise all the imaginary flux lines around the black stripe. From that moment on, I knew science was for me.

There are a plethora of people who I have been influenced by. However, my math teacher, the late Ms Selina, is my biggest role model. When faced with financial difficulties early in her career, Ms Selina knocked at doors in her neighbourhood to look for employment as a math tutor. With her savings, she was able to send her daughter to medical school and her son to a renowned engineering college. When I last visited her to learn basic differentiation, I was amazed by how enthusiastically she linked every mathematical equation to a law I learnt in physics class; her passion was untainted by the harsh realities of life. Because of her, I see every differential equation as a story rather than a string of symbols and every obstacle as a temporary distraction from my love for research. 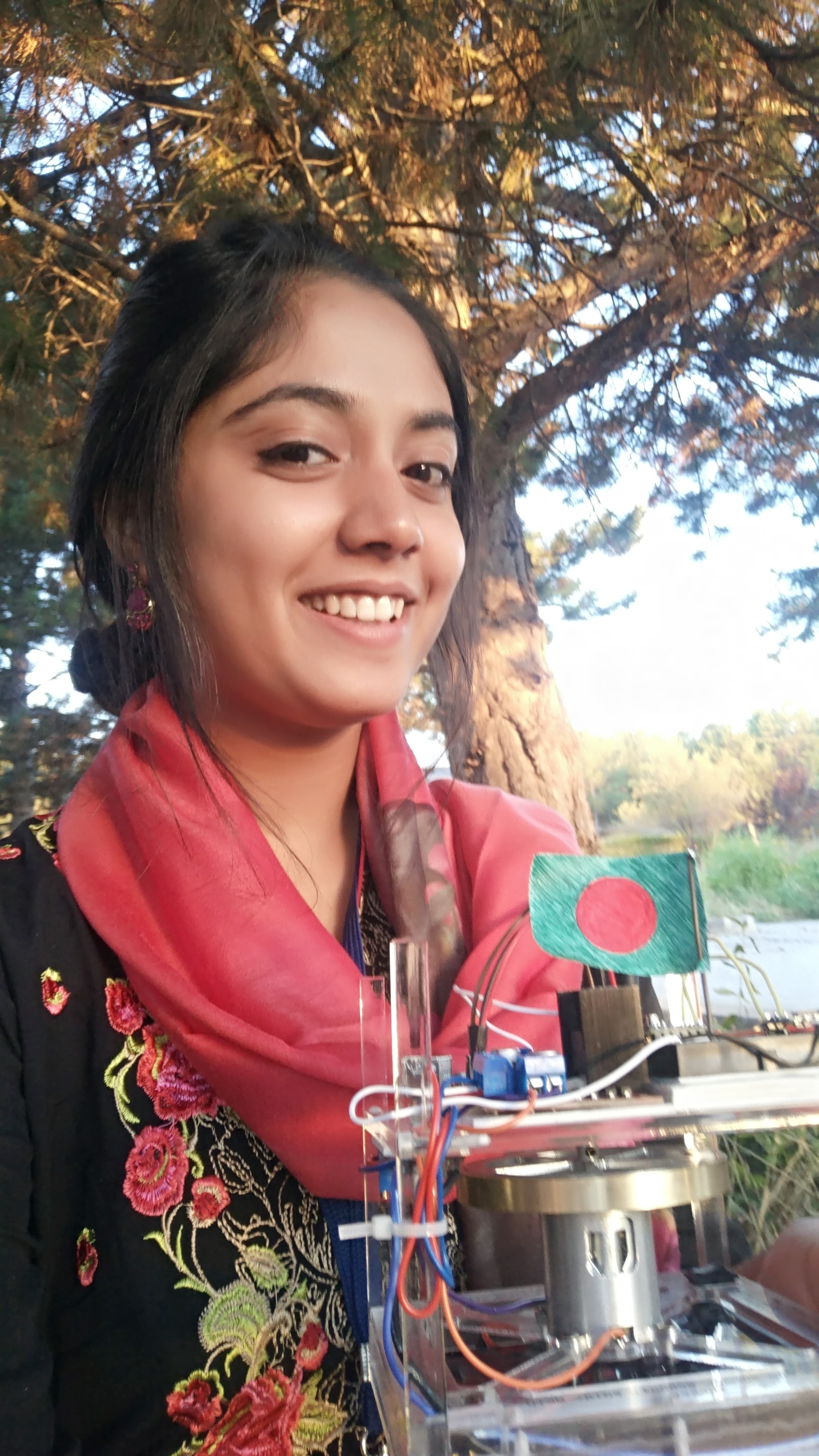 In high school, I was fortunate to have teachers who appreciated my curiosity. My physics teacher, Mr Reaz, would take out extra hours to teach me topics in detail. Later, he would provide me with books and website links which allowed me to intuitively understand each equation. I still remember the first time I was introduced to MIT OpenCourseWare: the lectures on Maxwell’s equations were captivating. From then on, I always had an interest in light, electricity and magnetism.
In 2015, I enrolled in Electrical and Electronic Engineering at the University of Dhaka. There were four different tracks from which I could take courses from: electronics, communications, computer and power. I enjoyed studying content from a variety of fields but my interests took a determined turn at the end of my junior year when I was introduced to optoelectronics and nanophotonics. Due to the lack of semiconductor fabrication equipment at my disposal, I was unsure of what kind of research I could conduct in my fields of interest. However, I was introduced to different finite element modeling tools which allowed me to study light matter interaction at the nanoscale regime without having access to fabrication facilities.
In my senior year, my undergraduate supervisor gave me the opportunity to work in collaboration with a group of researchers at the University of Southampton. My role in the research group was to simulate silicon nanowires in finite element software and to compare the output with experimental data obtained from Southampton’s lab. Even if I could not fabricate these nanoconstructs myself, I could virtually simulate and analyse whatever silicon structure I wanted. While studying the interactions of light with these nanowires, I decided to pursue my doctoral studies in photonics. Recently, I received a direct PhD offer from the Institute of Optics at the University of Rochester. I hope to delve deeper and make sense of the strange behavior of light in the nanoworld.

In my junior year, I had the opportunity to take part in the Student Small Satellite (SSS) project directed by the Asia Pacific Space Organization (APSCO). The three year-long project is a collaboration between eight countries aimed to give students hands-on experience in satellite engineering. The project aspires to launch one microsatellite and two cubesats in 2020. During the summer camps hosted in Beihang University, China, and Middle Eastern Technical University, Turkey, I worked on activities with students of different academic backgrounds. Such an experience helped me appreciate the advantages of working in an interdisciplinary environment; every individual can add a different perspective when problem-solving. For example, when designing a solar panel for a particular satellite mission, I would have to ask a variety of questions: How much solar radiation would the satellite receive at the particular orbit height? How long will it be in the shadow? How much power will be consumed by the different subsystems? What kind of radiation hardness will be required of the solar cell material? How will I protect the panels from the debris in space? This kind of questioning helped me see that an informed decision can only be made if interdisciplinary participation is fostered. The successful launch of the three satellites next year would mean that every scientist and engineer correctly applied their knowledge in this cool scientific concerto!

At the beginning of my senior year, Dr. Mainul Hossain, under his direct supervision, gave me the opportunity to work on black silicon in collaboration with a group of researchers at the University of Southampton. My role in the research group was to model the irregular bends of silicon nanostructures in COMSOL Multiphysics, a finite element software, and to deduce how such randomness contributed to an increase in photocarrier generation. However, I had to first verify that my finite element model actually worked!
After spending several sleepless nights reading literature and software guide books, I could impose the required boundary conditions. At 1.00 hrs, after pressing ‘run’ for the 37th time on the cluster computer, I fell asleep next to the monitor. When I woke up, I saw that the simulated output matched perfectly with previous experimental data recorded at the lab in Southampton. I never thought that two graphs hugging each other could bring so much excitement to my life. Finally, I had a solid foundation to start modeling nanostructures that have never been fabricated before. 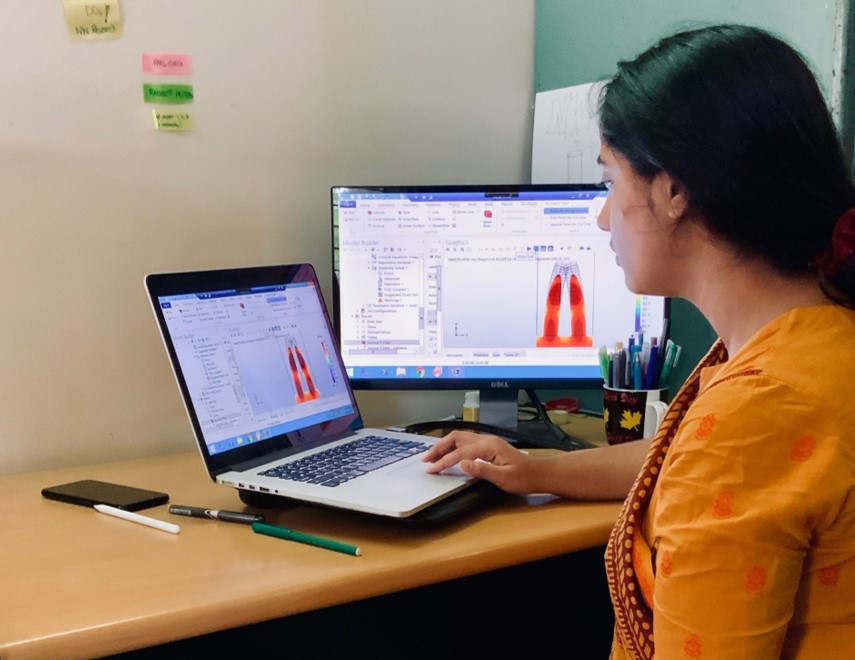 What is a ‘day in the life’ of Quazi like?

At 23.00 hrs, I run my simulation on the cluster computer for the last time in the day. I wake up at 7.00 hrs to see the results – this pretty much determines how my day might go! After breakfast, I take a two hour commute to my university while reading the newspaper or the TIMES magazine. From 10.00 hrs to 13.00 hrs, I attend classes. After lunch, I have lab work from 14.00 hrs to 17.00 hrs. Then another two hour commute back home. While I sip my evening cup of tea, I tell my brother all the interesting things that had happened to me in the day. At night, I either start tweaking the simulation settings and send progress reports to my research team or I help anxious juniors decipher their simulation errors.

I hope to conduct research that can have meaningful applications in the energy sector.

I absolutely love watching TV shows especially historical ones like ‘Victoria’ or ‘The Crown’. However, if I run out of episodes, I call up friends to catch up on their lives. I guess I just love stories – real or imaginary.

Never feel that having a happy family and a fulfilling career are mutually exclusive. There are countless women who balance work and life and still make time for themselves too. Hence, all you need is will and power.

I am excited to see how the concepts of nanophotonics will revolutionise the solar cell industry. I cannot wait to see the day when solar cell efficiencies sky rocket to the point that non-renewables do not stand a chance when it comes to costs. I hope to be a part of that revolution.

I think there should be more opportunities for female students to connect with senior women mentors working in science. An encouraging phone conversation with a student can help get rid of insecurities. Believe me, you never know what kind of impact someone’s story can have on a younger person walking down a similar path.