#LINO19 young scientist Leïla Haegel from France is a postdoctoral researcher at the University of the Balearic Islands in Palma, Spain.

Leïla works in experimental fundamental physics, which means that she uses extremely faint signals to probe how the Universe works. Currently, she is working on improving our understanding of black holes and gravity using gravitational waves signals from the LIGO experiment. During her PhD, she has studied how particle physics could explain the lack of antimatter in the universe through the prism of neutrino oscillations. Enjoy the interview with Leïla and get inspired:

In my last year before University, I was much more interested in Philosophy than Physics. During philosophy classes, I was asked to think deeply about some profound concepts, while in physics classes I felt I just had to compute some numbers in some specific systems. But when I went to ask my philosophy teacher about the possible careers available with a higher education in philosophy, it seemed bounded to teaching and that sounded a little recursive to me. And when I was trying to answer those fundamental questions that occupied philosophers, it appeared to me that physicists too were talking about the nature of space and time and the fate of our Universe, and had the advantage to put their theories at the test of Nature. So I decided to study Physics instead, and my path brought me to become an experimental researcher in fundamental physics. 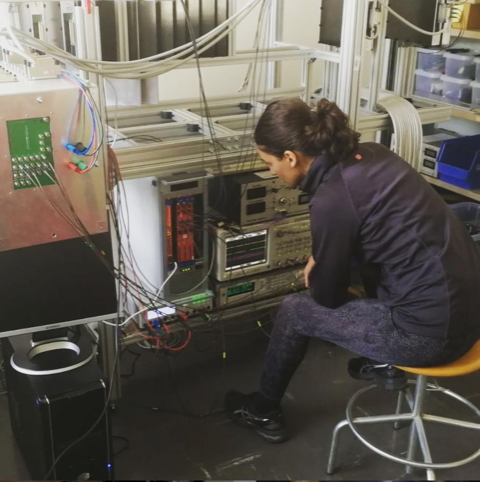 Leïla setting up an experiment at CERN. Photo/Credit: Leïla Haegel

When I decided to study Physics, I was certainly not encouraged in becoming a researcher as there were none around me, and the common opinion was that there were little to no jobs for such abstract scientists. As in France, engineering studies contains a lot of physics, I enrolled in an engineering course with the idea that I would try to get a job in a space project, hopefully linked with astronomy. As I had to do an internship, I did it in the engineering team of a research laboratory, where I got to discover particle physics and the researchers working in it. It was the revelation I needed: fundamental physics was the subject that interested me, and one could actually have a job as a researcher! From this point, I abandoned my plan to go to an engineering school in south of France to continue with a Master in fundamental physics in Paris specially designed for future researchers. I had to catch up a lot of concepts I had never heard of on my own, but with enough hours at the library and exchange with other students I succeeded in entering the specialisation in particle physics and cosmology I aimed for. I did more internships in particle physics and numerical relativity, and moved to the University of Geneva in Switzerland to study neutrino oscillations and their link to the composition of the Universe for my PhD. When I graduated, I decided to widen my experience in probing fundamental physics, and chose to join the exciting field of gravitational waves that were offering the first direct probe of black holes and a new way to study gravity. This is where I am now, enjoying the new perspective in understanding our Universe opened by the brilliant minds that preceded me.

I am now working on the LIGO experiment, that detected gravitational waves directly for the first time in 2015. This immediately opened a whole new field of astronomy: suddenly we could directly probe black holes, study gravitation closer to the limit of our understanding, and survey the Universe composition in a new way. It is very exciting to be part of an adventure where you feel there is so much to explore, and to be directly studying the most exotic objects of the Universe and its most fundamental laws, with the potential to understand them much better.

Fundamental physics is at a special point where we have probed our current theories underlying the functioning of the universe very accurately, but we keep detecting a variety of phenomena such as dark matter, dark energy, or black holes, that those theories cannot fully explain. As a result, theoreticians have designed many extensions of our current theories, more or less at the limit of being tested. I am fascinated by the moment where a theory collapse into being reality, and I work in using experimental data to study the validity of such theories, or try to find patterns in the data that could help in designing or refining the hypothetical models. Ultimately, I hope to contribute to the vast
effort to understand how our universe is working and evolving with time, and what it means for us. But as science concerns all mankind, I am also involved in sharing my research with others and I participated in various outreach projects. As a researcher with Moroccan origins, I created the ADARA association to promote science in North-African countries by organising seminars, hosting internships and disseminating arabic research – contact us if you are interested! 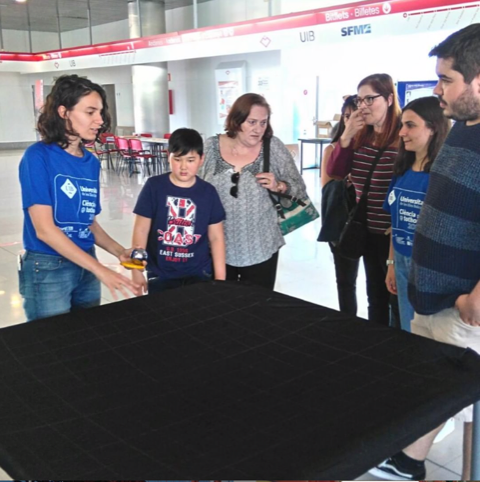 I usually use the weekends and holidays for some outdoor time – my favourite activity is diving, that turns out to be a real meditation for me. During my last break between two contracts, I have spent one month working in a dive club in South Asia where I was in the water every day with sea turtles and manta rays – the best way to reset before going back to the academia lifestyle! If it is a rainy day, I also enjoy reading and writing a lot, although finding some time for other activities is often challenging.

Take the time to survey what interest you, and try to find some people working in those fields. Diversify who you talk to have many opinions, and if you doubt, gauge your concerns with what you accomplished. I tend to think that it is better to try to aim for the highest from the beginning, but with plans B in case it turns out to not be the right path, instead of censoring its own ambitions. And if you realise what you are doing is not the right thing for you, no despair: it is often possible to change to be on the desired path, and while it is not always smooth, such experience actually make you prepared for the rarely linear worklife and make you a rich human. Once in research, always keep in mind why you decided to study this subject: senior academics may want to push some ideas on you, but a better work is always performed when you know why you are doing it, so always try to get how it is inscribed in the big picture of science. The pressure of publishing sometimes can lock researchers into conservative mechanisms, but it is always good to expand one’s views by attending seminars, conferences, or just chatting with colleagues.

Following the current status of fundamental physics, it is not the easiest question to answer as our theories seem to work very well but the universe keeps giving us paradox that cannot be solved by them! One of them is the expansion of the universe, that is accelerated by an unknown source: there is some discrepancy in the measurement of the nature of this source, and gravitational waves provide an independent tool that could help understanding it better. The solution may lie on an extending our current theory of gravitation, and I am currently working on improving our gravitational waves models and designing new tests in order to verify if the theory behaves as expected in the vicinity of black holes – the most extremely dense objects in the universe. However we still cannot probe the interior of black holes, which are so dense that they require a theory of quantum gravity that is still not developed, but may be what we need in order to answer all those questions. On the extremely small scale, there is still some probability to detect new particles that may explain some limitations of the current model of particle physics, such as the origin of neutrino masses or the nature of dark matter. I am curious to see if theoreticians will unlock the missing theory first from the current observations, or if the universe will give us another mystery that will guide them beforehand.

There is no shortage of women interested in science, but probably an unbalance of women interested in the scientific career as it is available now. As a woman physicist starting her own family, I think a big bottleneck is the mobility that we are required to have in our early career: after studying eight to ten years to obtain the PhD degree, we have to perform many short-term contracts all around the globe, as there is a tacit rule that a physicist must export itself. As a consequence, researchers not only rarely have a permanent position when they would like to create a family, but they also know they will be required to move to another country or at least city soon. Such constraint gives a clear indication that a blossoming couple or family life is not encouraged in academia. It results either in long-distance relationships or in a partner following the other at the expanse of its own career for several years, and ends up in a high proportion of researchers shifting their career after their first child. In the era of internet and globalisation, I think that academia seriously has to examine itself and wonder if it should to keep on relocating its young researchers as the peril of losing its brightest ones over more secured careers.