Lindau Alumna Julia Healy from South Africa is a PhD student at the Kapteyn Astronomical Institute at the University of Groningen and the Department of Astronomy at the University of Cape Town. She studies how galaxies evolve, particularly in dense cosmic environments called galaxy clusters. She uses radio telescopes like MeerKAT and Westerbork (in the Netherlands) to probe the neutral gas content (which is the raw fuel for star formation) of galaxies in the cluster environments. The neutral gas is extremely sensitive to the environmental processes which affect the formation of stars and thus the evolution of the galaxies.
Julia participated in the 69th Lindau Nobel Laureate Meeting.

Enjoy the interview with Julia and get inspired:

Since I was a young girl, I wanted to be a pilot. When I was in primary school and watched Star Wars for the first tim, this dream changed to becoming an astronaut. I later realised that most astronauts have some kind of science/engineering/medical degree, and since I was still very much interested in space, I was drawn to Astronomy. 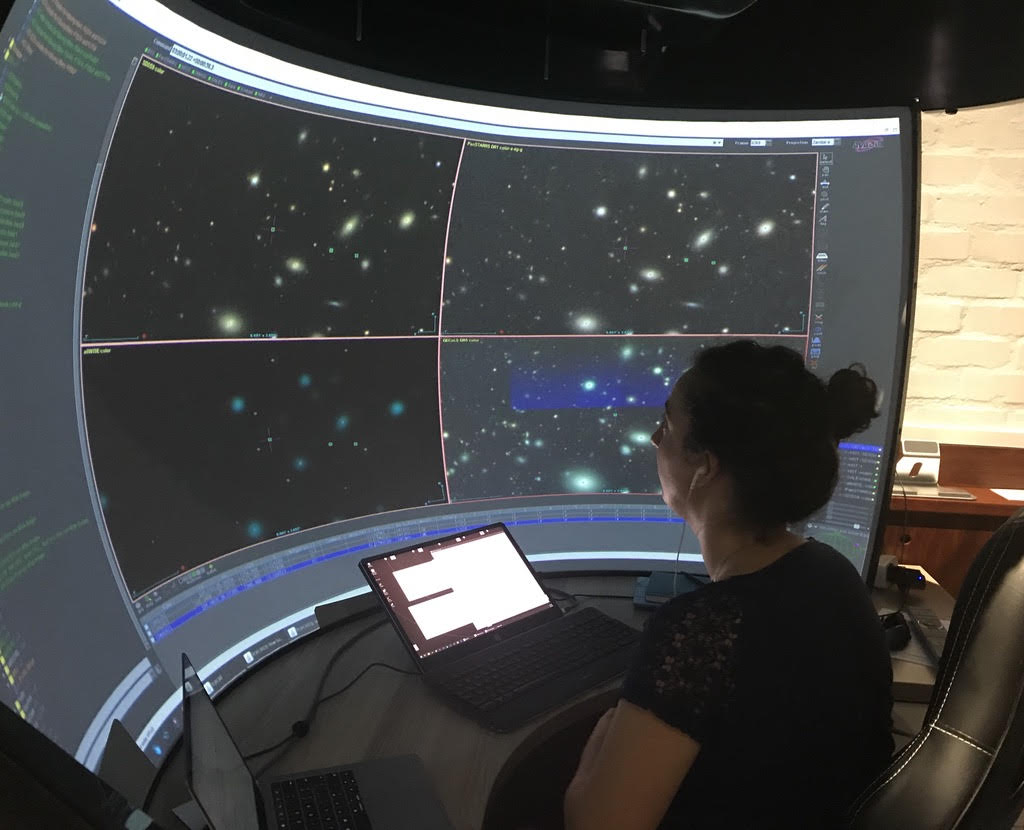 My family are probably my biggest role models — my parents have always encouraged and supported me in whatever dream I wanted to pursue. My grade 10 science teacher also played a huge role in my interest in physics, as a Christian, she was one of the first people to show me how science and faith can co-exist without arguing with each other.

I grew up in the suburbs of Cape Town in South Africa. I was privileged enough to go to one of the top public schools in the country which prepared me well for life at university. I took a year off after high school, starting my first year of university at the University of Cape Town a year behind my schoolmates. Despite being near the top of my high school class, and acclimatised to the university environment, I nearly failed my first year of maths. This was a wake-up call. The next three years were a battle through the exams as I realised I loved project work, but struggled to find the motivation to sit down and study for exams. In the last year of my Bachelor of Science (BSc), I was selected to attend Princeton University’s summer undergraduate research program. Normally a 12-week program, I only went for 4 weeks as this was the length of my winter holiday, but it was enough to show me that I really enjoyed astronomy research. This opportunity was facilitated and supported by a network of South African female scientists and engineers called the Hope Network; while the network is no longer active, my gratitude towards Dr Renée Hložek (my host/advisor at Princeton, who was then a post-doc at Princeton University) and the rest of the Hope network is endless as I think this experience was one of the pivotal moments in my career. Following my BSc in Astronomy and Physics, I did a BSc Honours in Physics. The project I did during this honours year was the first time I had to choose between a project I was really interested in, and a supervisor I really wanted to work with (and more importantly, I knew I could work with). I ended up choosing the supervisor, and later fell in love with the field. I still work in the same field now. At the end of my honours year, I was awarded a Masters Scholarship by the South African Radio Astronomy Observatory (SARAO; then SKA-SA) to work on a project preparing for the MeerKAT large survey project, LADUMA, and 2 years later I was offered my current position, a joint/double degree between the University of Groningen and the University of Cape Town which is also partly funded by SARAO. This double degree position has its challenges as I travel between Cape Town and Groningen fairly regularly, but being able to learn from some of the top astronomers in my field in Groningen and still maintain an active connection to a growing community in Cape Town outweigh the difficulties. 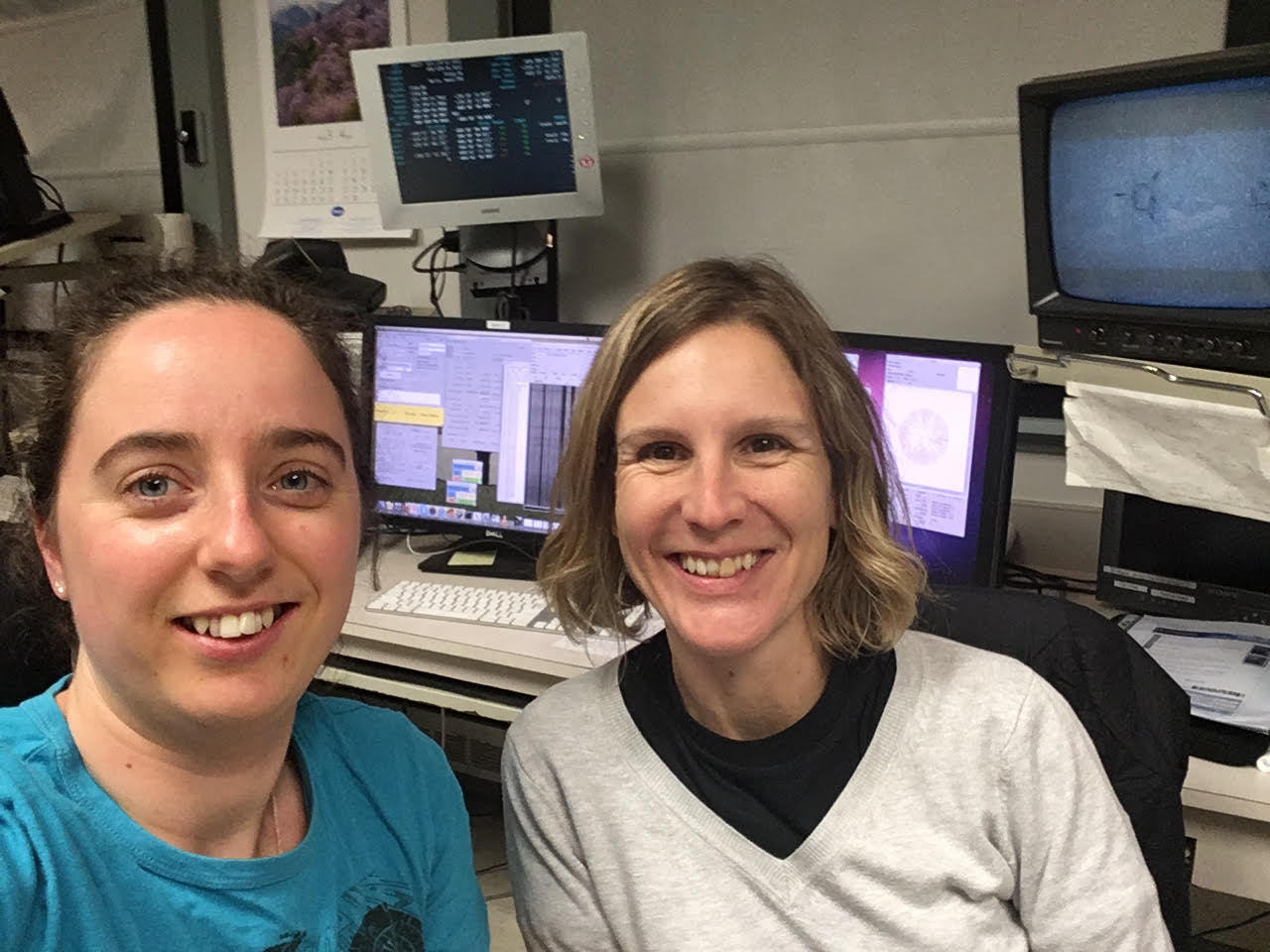 Julia Healy with one of her primary thesis advisor, Dr Sarah Blyth (UCT) during an observing run at the 3.5m WIYN Telescope in Arizona, USA. Photo courtesy of Julia Healy

One of my advisors had a project with MeerKAT-16 (the first call for observing proposals with MeerKAT was for only 16 of the 64 dishes in 2017/2018), looking at a super cluster (a collection of galaxy clusters) in a region of the sky near the plane of the Milky Way which we call the Zone of Avoidance. This region is very difficult to observe as there is so much dust and stars in the way that we can’t see through with optical telescopes (radio telescopes do not have this problem), so we didn’t really know how many galaxies we would be able to detect in the radio. This project was amazing as it was among the first to show us how sensitive MeerKAT is, and it gave insight into how much we are going to be able to do and see when the full array comes online (MeerKAT-64 was inaugurated on 1 July 2018, and projects with the full array are currently being observed).

Submitting my first paper, and getting it accepted after a 18-month battle just before I got on the plane to come to Europe for #LINO19 was definitely one of my proudest moments. But any time I am able to fly the South African flag in the name of science makes me very proud, this event being one of the biggest moments.

What is a “day in the life” of Julia like?

I usually start my day with a cup of rooibos tea in bed, during which time I check emails and messages that have come in overnight. When I get into the office (anytime between 8-9am), I will browse the Astronomy arXiv (this is an open access repository of astronomy related academic articles) for the new submissions. The rest of my day is spent in front of my computer examining my data, reading a paper, or adding to my current thesis chapter.
Once a week I will chat with my two main supervisors, which ever one is not in the same country as me will Skype in; this regular meeting keeps me on task and accountable. When I am in Cape Town, I occasionally have meetings related to being one of the post-grad reps in my department, these are either chatting with the other students or liaising with department staff or once a month, a meeting of the faculty post-grad council. I usually try leave the office by 6pm, and head for home where I will crash for the day.

Ultimately, I still want to be an astronaut. If along the way I can help shed light on some of the unknown unknowns or shrink the known unknowns in how galaxies evolve, then I will be happy. 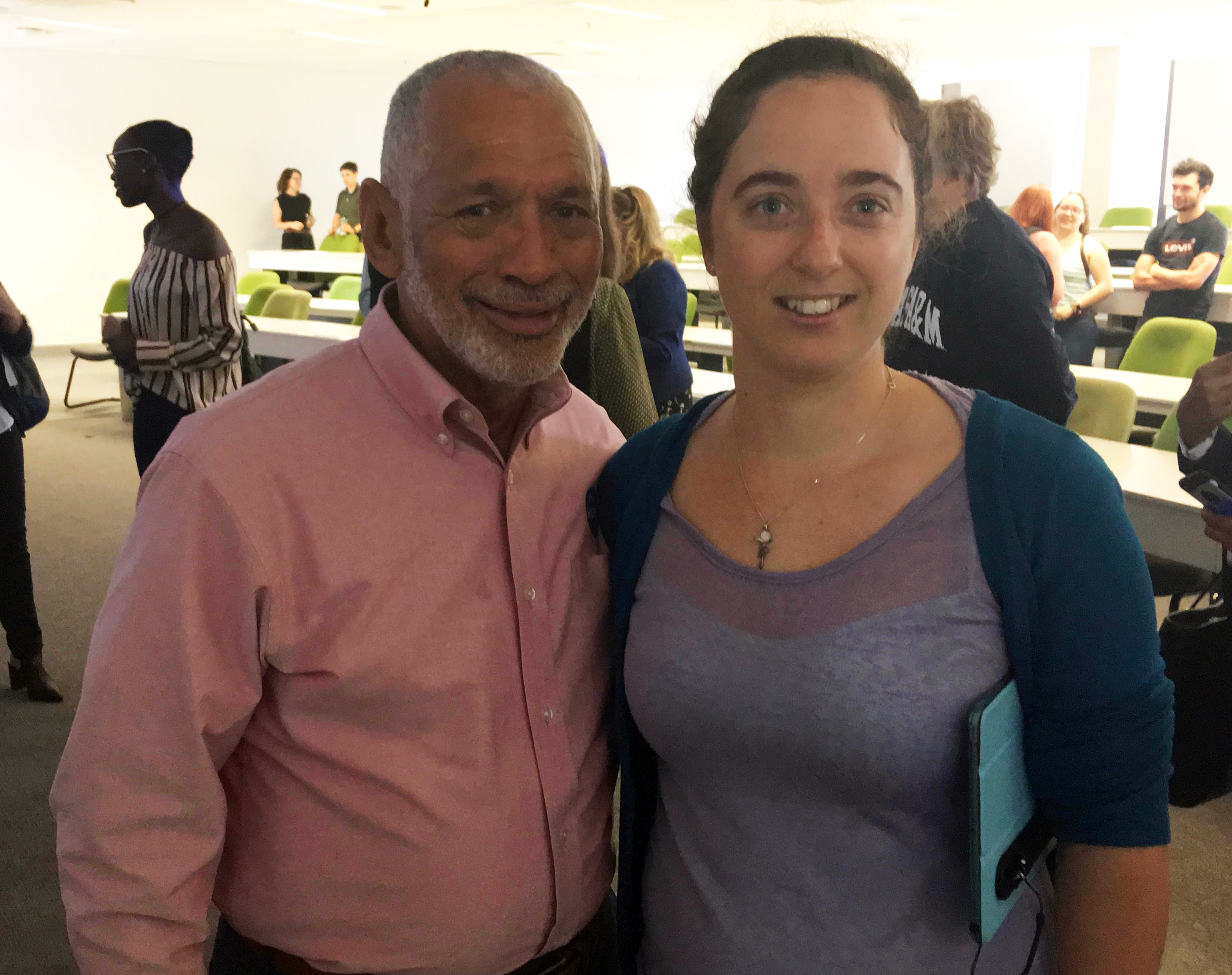 Julia with former NASA Administrator and astronaut, Maj. Gen. Charles Bolden in Cape Town after an open exchange with young scientists and engineers at UCT.

I enjoy reading, I have built up quite the collection of biographies of astronauts. I also spend a lot of time outside of work with my family and friends, and I have been known on occasion to enjoy a hike in the mountains around Cape Town or a swim at the beach. I also try and spend as much time as I can making sure I get sufficient sleep/relaxation so that I am mentally sharp when I am in the office.

Follow what interests you, don’t worry about other people’s opinions. Build a strong network of people around you who will support you no matter what. Find a mentor, can be an older student or postdoc or staff member who isn’t your supervisor — it is always good to have someone removed from your supervision chain to chat to. Most importantly, when choosing potential supervisors, always make sure that you can get along with the person – chat to their other students and try to meet them before signing on to work with them if possible.

In your opinion, what will be the next great breakthrough in science?

Tough to say, but with MeerKAT and soon SKA (the next generation of radio telescopes) starting to produce data, scientists are going to have access to a view of the universe we haven’t been able to see thus far. I think these instruments will be at the forefront of the next big discovery, but since it is usually the unknown unknowns that change our understanding of physics as we know it, it is difficult to predict what it will be.

Support for young women at grassroots levels — you can’t build a building from the top without a proper foundation. We need to improve our STEM teaching and the teaching environments at primary and high school level so that the numbers of female students entering the university arena to study science are equivalent to the male students. There is also a certain level of responsibility on us women currently in the field to be visible to younger women so that they realise that it is normal and okay to be a woman in science. Universities and funding agencies should also be more flexible for students and post-docs who go on maternity leave, female scientists should not have to choose between having a family and having a career.