This interview is part of a series of interviews of the “Women in Research” blog that features young female scientists participating in the 67th Lindau Nobel Laureate Meeting, to increase the visibility of women in research (more information for and about women in science by “Women in Research” on Facebook and Twitter). Enjoy the interview with Andreia and get inspired. 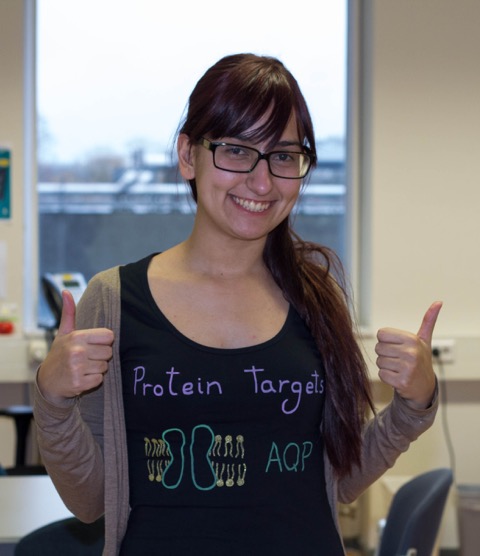 Andreia de Almeida, 31, from Portugal is a Postdoctoral Research Associate at the School of Chemistry (Cardiff University). Her research focuses on understanding the role of aquaporins in health and disease, especially cancer. For this, they use gold compounds designed by the group that are selective and potent inhibitors for these proteins. Additionally, she works in testing new metal-based drugs as anticancer agents.

I was always a very curious kid and, of course, I also had the traditional microscope that all the scientists had in their childhood. But I have to say that I didn’t always know that this was my passion. I was, and still am, very passionate about all types of arts, especially things that I can make with my own hands. With time, I realised that I liked arts, but mostly as a hobby. I couldn’t picture myself doing it as a career. I then chose a science path for my high school studies and applied for Pharmaceutical Sciences, Biochemistry and Chemistry. I got into Biochemistry and from then on my love for science truly started.

All my role models are women and men I met throughout my life. First of all, my mother, who is a very strong and independent woman. She raised me to become empowered and successful and to never feel less than anyone else, regardless of gender. Growing up watching her managing her own business, full time, while raising two children (after we lost our father, on her own) was definitely inspiring and showed me that we are capable of great things.

Secondly, I studied in a chemistry department that has more female scientists than males (for professors the ratio is about 50:50). The thought that this field could be male-driven never even crossed my mind. I also always worked with female bosses in groups with few men. I think that working in a female environment and with such strong and successful female models as supervisors always helped me to feel confident in my work and in myself. So I can say that all the females who I have worked with up to now contributed a lot to how I perceive science.

As I mentioned before, I did my BSc in Biochemistry and then I did my MSc in Structural and Functional Biochemistry in the same faculty. Moving from one to the other was the easiest choice, as they were organised by the same professors, and the MSc was an extension of what we learned in the bachelor course. When I was finishing my master thesis, I met my current supervisor, who was doing a research stay in our lab at that time. She had a position for a PhD student in the Netherlands opening a few months later. That was a big challenge for me: leaving my boyfriend, family, friends and my home country to move to a new country with a different culture, where I didn’t know anyone. It ended up being a great four years. Since then I am working at the School of Chemistry, Cardiff University, as a Post-Doctoral Researcher, which again took our little family to a new adventure and a new country!

I have to say that the coolest topic I have ever worked on is related to aquaporins. The field is fairly new (a couple of decades) and there is so much to learn and discover that there are always new challenges and new ideas! I am actually really excited to have the opportunity to meet Prof. Peter Agre, who was awarded the Nobel Prize for discovering these little proteins, at the Lindau Nobel Laureate Meeting.

The thought that this field could be male-driven never even crossed my mind.

I think that the time I felt the most proud of myself was the day of my PhD defence. In Groningen, the defense is a public event, very formal, that takes place in an amazing room. After the defense, everyone celebrates and the colleagues of the PhD student prepare a video, illustrating their life during those four years. Having my family there with me, witnessing that day, was one of the best feelings ever.

What is a “day in the life” of Andreia like?

This is one of the most complicated questions! My days are never the same, and I think this is why I love what I do so much. One day, I can be working in the lab in the morning, doing different types of experiments, mostly with cells, and then doing some computational work in the afternoon. Some days, I just stay in front of my computer preparing some orders, writing publications or grant applications and correcting student’s reports. Other days, there are seminars, group meetings and meetings with collaborators. There really aren’t days that are like the others! That’s the best part.

I love the academic world, despite all the politics, and I would love to continue. Ultimately, I would like to become a professor, but the road is still long. I think we have to take it one step at a time and build our own way.

All kinds of things! I am a blogger/wedding planner, together with three friends, at a blog called Once Upon a Time a Wedding. I have also been a dancer for more than 15 years and I used to teach Salsa and Kizomba during my PhD. Now I have turned to Tango, which is my new passion. Besides that, I love sewing my own clothes (I made my own wedding dress), photographing and painting/drawing. I can’t say I have a boring life!

Most of all: do what you love! It doesn’t matter if there are only few women in that field. It may be hard in the beginning. You have to be strong to fight stereotypes (and some mentalities), but don’t let anyone tell you that you can’t do it!

This is also a hard question. There are so many things happening at the same time in the most varied fields. I can say that one breakthrough that I hope comes soon is a new cancer treatment. Of course, as scientists, we know that one miraculous treatment is a utopian thought. However, an effective treatment for one cancer type, with less side-effects, would already be such a victory! I believe this can come sooner than we expect, as people are trying to repurpose FDA-approved drugs for different treatments than those they were originally designed for.

I think we should start by realising that recruiting female students is very different from increasing the number of female academics. There is actually a big number of female students at universities and some (if not most) European countries have more women than men in higher education. The biggest problem we face is keeping them in academia. I think the biggest challenges reside in showing women that the universities support them – with maternity leave, childcare, among other issues. These issues are not exclusive to women of course, but they do affect women more. When women don’t feel supported, they have a harder time at work and often feel like they have fallen behind their male colleagues (this is often potentiated by bosses and supervisors). Having a good support system in place and making sure that every person is treated fairly (regardless of gender) is a very important step to keep women in academia.