Women in Research: Catarina Esteves...
Back

Catarina will participate in the 70th Lindau Nobel Laureate Meeting.

Enjoy the interview with Catarina and get inspired:

My inspiration to pursue a career in science was triggered by the ubiquitous learning that is constantly “solvating” our day-by-day. Whenever performing scientific work, we are constantly being pushed to the limits of knowledge, working on the verge of discovery, which is very exciting. However, this excitement is in part a fruit of all the failed work, which is very common and might be als so mentioned. A scientist must learn to deal with disappointment and frustration, as they are part of the job. This fragile balance between success and failure is almost romantic, and romance gives life a different twist. That is why, in my opinion, science is so cherished by so many enthusiasts. Moreover, in science we are always young child’s playing with the world that surrounds us. 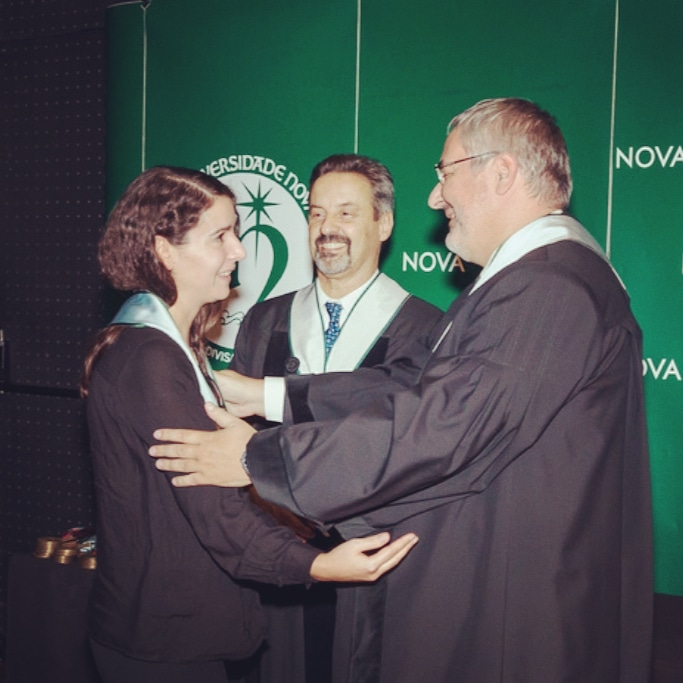 One day Catarina would like to become a full professor and continue to do scientific research. Photo/Credit: Catarina Esteves

I believe that the environment surrounding me when I was growing up ultimately influenced my curiosity for engineering. This was mainly due to my father’s working on a facility for hot water supply for a big dormitory building for students of Escola Náutica Infante D. Henrique in Paço de Arcos (near Lisbon). Thus, whenever I visited him at his work place I’d see two huge boilers (we have some photos together by the boilers), fuel tanks, and a bunch of pipes and valves. They even had subterraneous facilities, which I found very mysterious at the time. So, at high-school I chose to study science and then I applied for the Instituto Politécnico de Lisboa, Instituto Superior de Engenharia de Lisboa (ISEL IPL) to obtain a bachelor in Chemical and Biological Engineering – Chemical Engineering branch, and a master in Chemical and Biological Engineering. When I turned 16 years old, my father had a serious ischemic stroke, which rendered him handicap and with several comorbidities until today. It was a very strong blow to our family and as an only child, I’ve been struggling to find all the energy and motivation to keep helping him and my mother. And I must tell you, science is one of my big sources! Also, I’ve met a friend, a partner, a lover, so he’s another pillar to me. 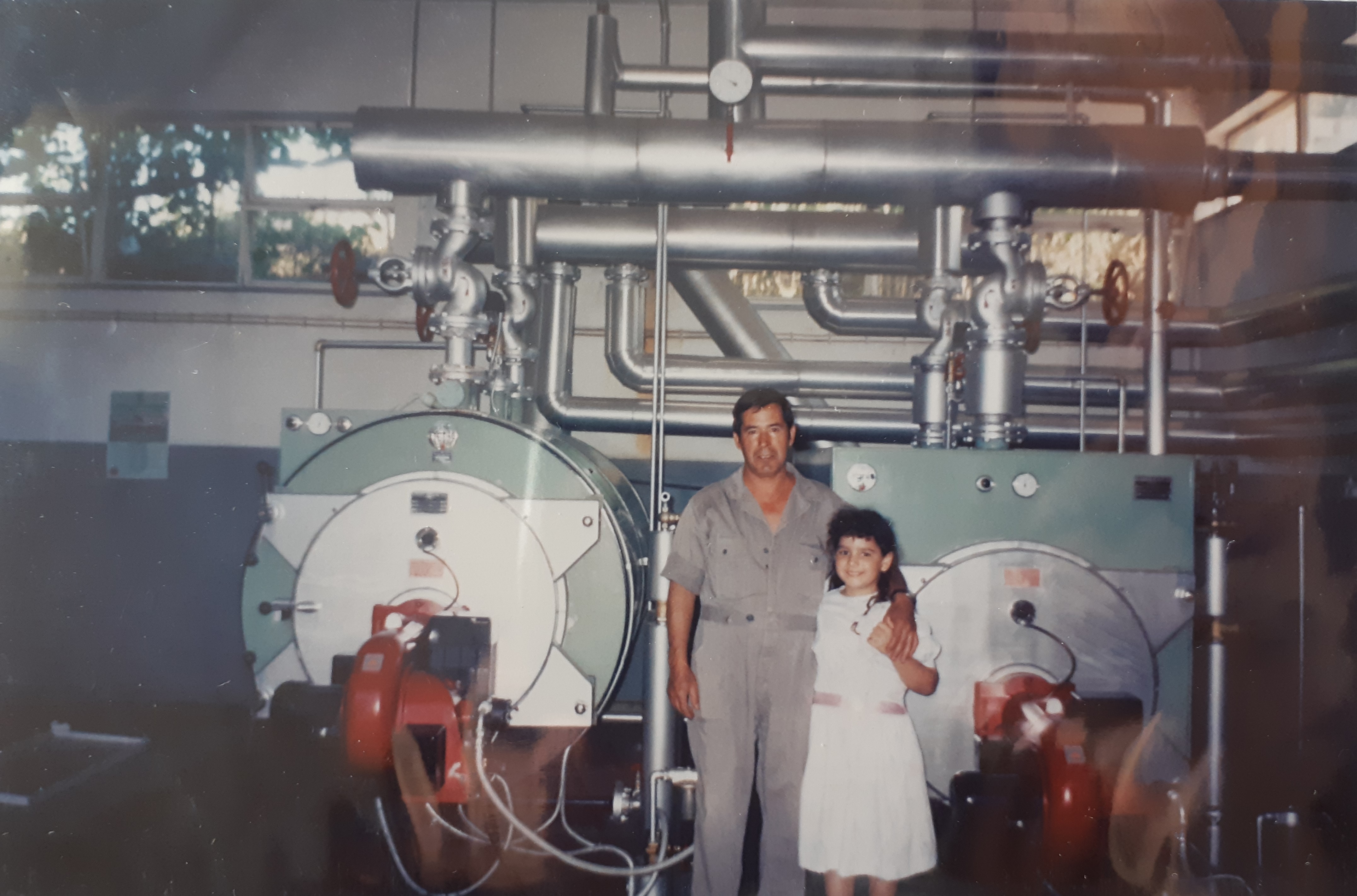 Catarina as a child visiting her father at his workplace. Photo/Credit: Catarina Esteves

And life continued and at ISEL I started to learn about Inorganic Chemistry, and a professor was kind enough to teach me in her spare time how to do research in this area. Just like that my passion for research flourished. Then, at Universidade Nova de Lisboa, Instituto de Tecnologia Química e Biológica (ITQB NOVA) I received my PhD in Inorganic Chemistry approximately ten years after my first endeavours into the scientific research world. With the help and collaboration of wonderful professors, mentors and colleagues we’ve managed to published articles in Q1 journals, and participated in national and international conferences, workshops or related events. I was lucky to receive four awards and/or honors, of which the MT Brandão | Metrohm Young Chemist Award 2018, and the Caixa Geral de Depósitos Award to the best MSc graduate of Chemical Engineering at ISEL, are highlighted. During my professional activities I’ve interacted with several national and international collaborators and stayed for three month at Université de Bretagne Occidentale as Invited PhD Fellow at the Laboratory of Prof. Raphaël Tripier. Briefly, up to the end of 2018, most of the research work consisted on the design, synthesis, purification and study of novel compounds for diverse applications. So now my focus is on improving our understanding on how the molecular association in solution impacts crystallization outcomes.

The coolest project I’ve worked on was the one homonymous with my PhD thesis “Development of Dinuclear Cu(II) and Zn(II) Complexes as Potential Inhibitors of Oncogenic Protein-protein Interactions”. We were able to synthesise some nice new molecular structures in order to study their complexation behaviour towards copper(II) and zinc(II), and afterwards the association between the metal complexes and selected polyphosphate anions was investigated. On a particular case, collaborative work was performed with researchers with strong background on oncogenic protein-protein interactions and nice study was published as a result (Inhibition of the STAT3 Protein by a Dinuclear Macrocyclic Complex, Mesquita, L.M., Herrera, F., Esteves, C.V., Lamosa, P., André, V., Mateus, P., Delgado, R. Inorg. Chem. 2016, 55, 3589–3598. 10.1021/acs.inorgchem.6b00116).

During my PhD defense. It was a really well spent afternoon discussing Chemistry.

What is a “day in the life” of Catarina like?

Well, before the current pandemic, it would vary a lot depending on either I would be at the lab doing experimental work or at the office concentrated on studying, writing a manuscript, applying for grants/projects, etc. It might also happen that I would be out on a meeting with fellow scientists or on a conference presenting the latest work in hands. But let’s consider an average day…I 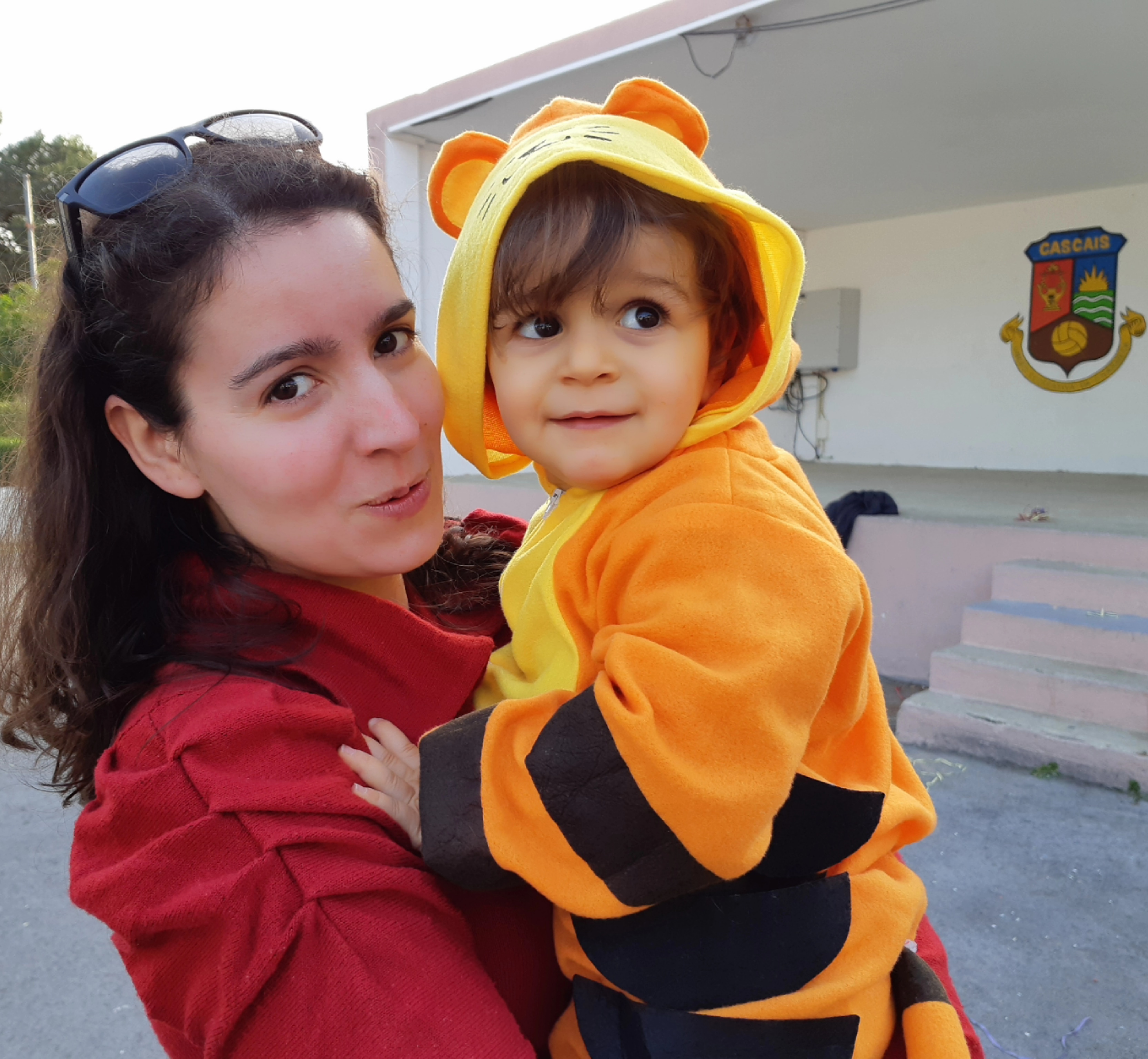 would wake up, wake up my son (sometimes it works out the other way around) and we get ready to leave. After letting him with my mother-in-law I would then drive ~ 40 km to arrive at the Faculty of Sciences of the University of Lisbon. I usually step into the lab to say good morning to my colleagues and to check on some experiment that might be running. Then, experimental work follows. If everything aligns, lunch time with colleagues follows. Afterwards, a quick stop for a cup of coffee, and then the afternoon reveals itself quite productive.

I should say, that before becoming a mother, I would enjoy losing myself so deep in some experimental work that I would not see the time flying … but now I have further responsibilities, so I run to my son in the end of the day for further discoveries. A few days during the week I need to give some support to my parents, helping them with groceries shopping, with their medication, with a few things at home. I’d like to stress once more that I’ve made massive efforts to balance my personal and scientific life, as I’m their only child and they both have serious health conditions. My father António has 90 percent incapacity due to a ischemic stroke he suffered in 2002, which was a major turnover in our lives and much influenced my interest for Chemistry, particularly my curiosity for Active Pharmaceutical Ingredients (APIs). My mother Antónia (I know António & Antónia) has 70 percent due to a auditive psychosis and several comorbidities. So I’m the proud caregiver of two elders and one child. They are my main motivation to succeed at work.

One day I would like to become a full professor and continue to do scientific research to the best of my abilities, passing on the knowledge and skills to the new generations.

I like to walk with my family, play with my son, talk with friends and neighbours, read, do yoga, ride a bike, swim…and sometimes just listen to the wind, the sea and the birds.

In Portugal the number of female scientists and female professors in Chemistry is quite high, so no problem here. However, if we look at the numbers concerning female directors of departments, rectors or even full professors, the pit between female and male gets deeper as more men occupy the mentioned positions. In my opinion, this translates very well the role of caregiver that women have in society and that eventually gets in the way of very time-consuming appointments.