A Once-In-A-Lifetime Experience
Back

There is a distinct lack of conversation about the Lindau Nobel Laureate Meeting in South Africa – the first that I heard of this opportunity was when I was asked by my supervisor if he could nominate me to attend the 67th Lindau Meeting. The selection process is very rigorous, and it was 4 months after submitting my application that I received an email informing me that I had been selected to attend. I was extremely excited to receive this email, to the point that I immediately rushed to my supervisor’s office to tell him the news. A travel grant was provided by ASSAf, and as the selected delegates were from different universities and research organisations throughout South Africa, ASSAf organised a pre-meeting team-building gathering, during which we met the other delegates. Several Lindau alumni were also invited to this gathering, to share their experiences and give us advice on how we should approach the meeting. This advice varied from the sensible, ‘Meet as many people as you can’, to the less sensible, ‘Don’t sleep at all’. For my stay, I was hosted by Lindau residents, and my host family proved to be exceptional. They went so far as to organise transport for me from Munich to Lindau, and to make sure that I got onto the correct train at the end of my stay. We had many discussions, which varied from the nuances of our cultural differences, to discussions about topics raised at the meeting, to sports, politics, and everything in between. The experience of being hosted by locals added substantially to the entire ‘Lindau experience’.

During the meeting, numerous programme additions were organised, to which only a small group of researchers was invited. These additions were sponsored by research organisations or multinational corporations. I was fortunate enough to be invited to attend two such events. The first event was the Summer Festival of Science, which was hosted by the German Federal Ministry for Education and Research. During this event, I found myself conversing with CEOs and vice-presidents from large multinational companies such as the Linde Group, Cabot Corporation and Lockheed Martin. Another opportunity was a flight in a zeppelin, as a part of an introduction to the ‘Clockwork Ocean’ expedition being undertaken by the ‘Helmholtz Zentrum Geesthacht’ of the Helmholtz Association. We were introduced to the methodology and equipment used to study the behaviour and impact of water eddies in the seas and oceans. Thereafter, we were taken on a 45-minute flight in the zeppelin for a magical view of Lindau and the Bodensee from the sky. We were joined for this flight by two Nobel Laureates, who were just as enthralled as we were by the views that unfolded. 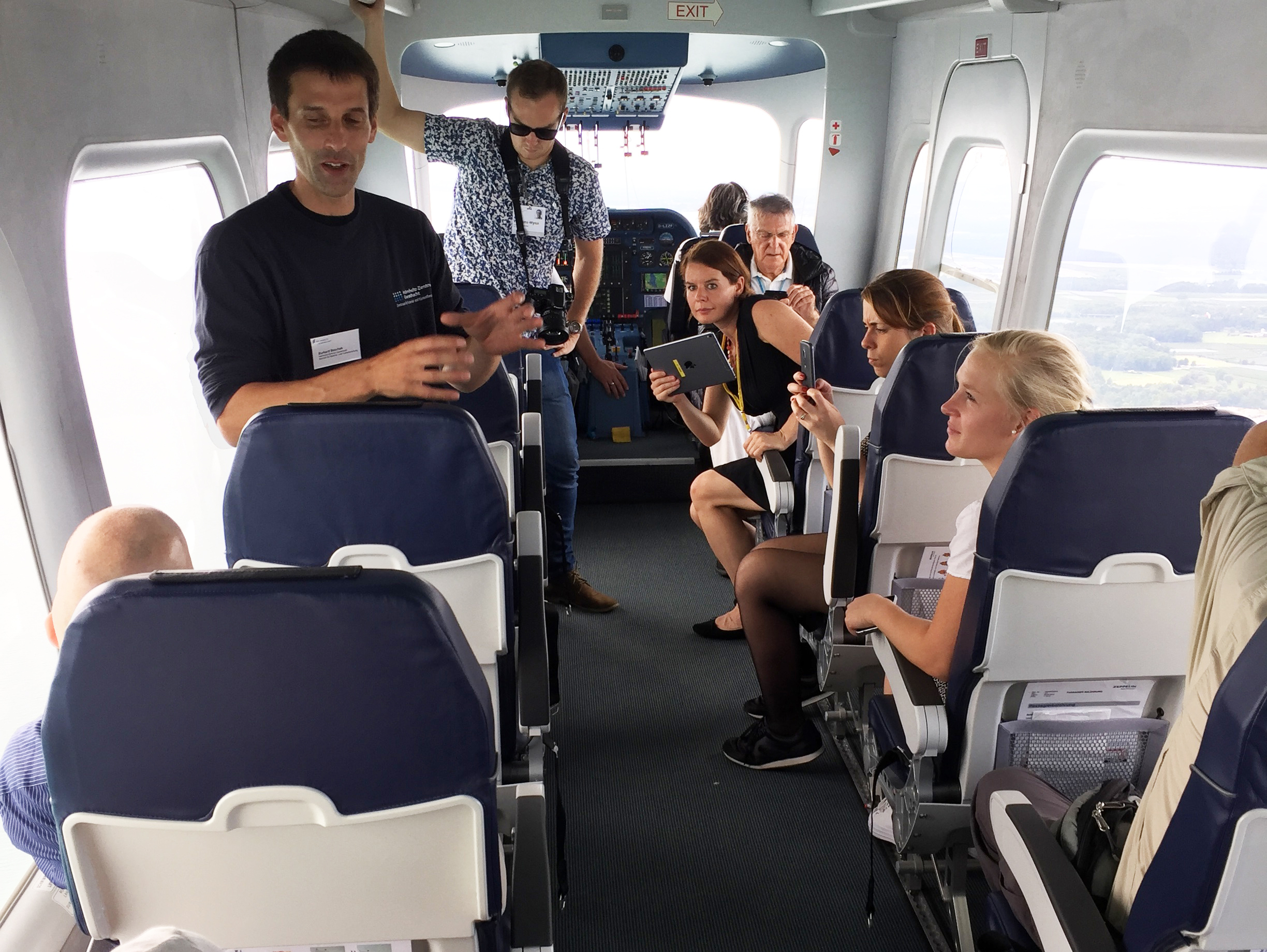 On board of the zeppelin, expedition director Burkard Baschek from Helmholtz-Zentrum Geesthacht explains the research of ‘Clockwork Ocean’ to Mark Williams-Wynn, Nobel Laureate Dan Shechtman and others. Photo/Credit: Roland Koch/Helmholtz-Gemeinschaft

The days of the conference flew past at a breath-taking pace, although not without presenting each of us with many opportunities to network and to learn from both the Nobel Laureates and the other researchers present. The advice from the alumni to not sleep made much more sense at this point. There were simply so many interesting people to meet and to discuss science with, that we all ended up sleeping far less than usual. For me, the lectures that most stood out were those in which the Nobel Laureates chose to share their personal experiences as researchers. These were lectures by Peter Agre, Dan Shechtman (2011 Chemistry Nobel Laureate) and Martin Chalfie (2008 Chemistry Nobel Laureate). After the lectures, each Nobel Laureate held a discussion session with the young researchers. I found Shechtman’s discussion session particularly pertinent to me, as we discussed science entrepreneurship and education. There was a strong emphasis on women in science, technology, engineering and mathematics (STEM) at this year’s meeting, and as such, many of the young scientists involved in discussion panels and sessions were women. In stark contrast, only one of the 29 Nobel Laureates present was a woman (Ada Yonath, 2009 Chemistry Nobel Laureate).

On the final day of the meeting, we were treated to a boat ride to the garden island of Mainau, where we spent the day. Two occurrences during the events held on the island further highlighted women in STEM. During the closing panel discussion on ‘Ethics in Science’, a young researcher from the University of Cambridge, Dr Karen Stroobants, was, by far, the stand-out panel member, eclipsing the otherwise male-dominated panel. Secondly, Dr Hlamulo Makelane, from South Africa, gave heartfelt and emotive closing remarks for the Lindau Meeting on behalf of the young researchers, doing South Africa and women in STEM proud. Everything considered, the Lindau Nobel Laureate Meeting was a once-in-a-lifetime experience that I would recommend to anyone who is eligible to attend. Were it not for the fact that young scientists are only afforded the opportunity to attend once, I would have applied immediately for the next meeting.

This article is an excerpt from “Young South African researchers attend the 2017 Lindau Nobel Laureate Meeting” by Nolwazi Nombona, Mark Williams-Wynn and Paul Kennedy, which was originally published in the South African Journal of Science.

Mark Williams-Wynn, PhD and Lindau Alumnus 2017, is currently a Post-Doctoral Fellow at the Thermodynamics Research Unit at the University of KwaZulu-Natal. For his doctoral studies, he developed a process to treat oil sludges using novel supercritical solvents. He has also led a team developing a process for the recovery of rare earth metals from lighting waste. His current areas of research include waste treatment and recycling processes, and he is involved in various chemical process development projects.