Angus Deaton: Life after Stockholm
Back

This piece first appeared in the quarterly newsletter of the Royal Economic Society. It is part of Angus Deaton’s ongoing ‘Letter from America’ column.

In these letters, which now stretch back two decades, I have only occasionally interrupted accounts of serious issues with cameo personal appearances (even though my shape is now remarkably similar to that of the late Alfred Hitchcock). But in the last six months, both Anne and I have been in the news in a rather serious way, and I thought it might be entertaining to write about our experiences, some of which are of more than local interest. In October, I learned to my delight that I was to be the recipient of the 2015 Nobel Prize, or more precisely-and there is no end of pedants and people who dislike economics who want to insist on it — the recipient of the Sveriges Riksbank Prize in Economic Sciences in memory of Alfred Nobel. As many previous recipients have told, the experience is both exhilarating and overwhelming; l have often thought of the story of the dog who liked to chase buses, but had little idea of what it would be like to catch one. The Nobel is not just catching the bus, but being run over by it.

While the bus was driving back and forward on top of me, Anne Case and I published a paper in early November in the Proceedings of the National Academy of Sciences, showing a reversal of the long-established decline in mortality among middle-aged whites in the US, especially those with only a high school education or less, and that the fastest rising causes of death were suicides, accidental poisonings (mostly from drug overdoses, both legal and illegal), and alcoholic liver disease. We had established those findings in May 2015, and every time we showed them to economists or physicians, jaws would drop. Even so, we failed to interest either of the major medical journals, one of whom rejected it so quickly that I thought I must have sent the paper to a bad email address. But once it appeared in the PNAS in early November, the storm of publicity exceeded by an order of magnitude the still ongoing publicity about the Nobel. Now there were several buses driving back and forward over both of us. Pleasant enough, but we were gasping for breath.

Angus Deaton received the Sveriges Riksbank Prize in Economic Sciences in Memory of Alfred Nobel in 2015 for his analysis of consumption, poverty and welfare Picture: Wikimedia Commons/Holger Motzkau (CC-BY-SA 3.0).

Of course, the Nobel and ‘the paper’ became entangled. Although the authors were listed as Anne Case and Angus Deaton, the order was typically reversed, and in several cases, became ‘Nobel economist Angus Deaton and his wife, Anne Case, who is also a researcher’, a designation that the Alexander Stewart 1886 Professor of Economics and Public Affairs was less than happy with. Justin Wolfers eventually wrote a piece in the New York Times on similar cases of blatant sexism in economics, including Ralph Nader’s extraordinary suggestion that Janet Yellen sit down with her Nobel Prize winning economist husband (George Akerlof) before she decided what to do about interest rates. But some of the entanglements were entirely positive. A splendid tradition in the US is that American Nobelists are invited to the Oval Office, so we went with two remarkable chemists who work on DNA repair-one of whom, Aziz Sancar, was born in Turkey to illiterate parents-and the infinitely charming Bill Campbell, born in Ireland, who found a cure for river blindness. Three out of the four are immigrants to the US, and the fourth, Paul Modrich, is the son of an immigrant. For Anne and me, the highpoint was when President Obama opened the door to the Oval Office, took our hands, and said ‘we have got to talk about this paper that you have written.’ He had clearly read it in detail, he had comments about earlier similar events in the African American community, and even some suggestions. Unusual attention for an academic paper, and all of this before we had been to Stockholm.

One of the most surprising reactions to ‘the paper’ has been the extent to which the newspapers, especially the New York Times and the WashingtonPost,  checked and extended our work. The Times downloaded the 36 million individual death records since 1999 in order to run their own analyses. The Post, very recently, correlated the ‘deaths of despair’ across counties with the voting patterns in the primaries showing, as many had surmised, that the deaths are correlated over space with votes for Donald Trump. We have also, of course, been horribly misquoted, including by Hillary Clinton who bizarrely claimed that middle-aged whites in America now have lower life expectancy than their parents. And there has been a good deal of hostility from some in the ‘health inequalities’ part of the space, upbraiding us for working on white mortality rates while blacks are still suffering. Indeed, at least part of why our finding had not been noticed was an excessive focus on inequalities, so that much attention had gone to the narrowing of the black white gap, without noting that some of the narrowing had come from increased deaths among whites.

Many have written about the splendors of Stockholm, and the videos and photographs on the Nobel website give a good idea of the colors, the flowers, the pomp, the dresses (Anne’s scarlet sheath could be seen from outer space), the jewelry, the King and Queen, and the princes and princesses. Being treated like a head of state, even for a week, is a memorable experience. It was a week to celebrate with my family — a nine-year old grandson in white tie and tails was a truly memorable experience —and with several vintages of coauthors. Perhaps what will stay with me the longest is that, for the Swedish people, the Nobel ceremony and the banquet that follows play the same role as the Oscars do in the US. People make dates with friends, they buy food and drink, and they watch everything on TV. All of this, amazingly, is to honor, not movie star charisma, or athletic prowess, but intellectual achievement. Alfred Nobel himself had the unusual opportunity to read his own obituary after his brother had died in an explosion, and been mistaken for him. He was so horrified by the descriptions of Dr. Death and the destruction he had brought to mankind that he determined to be remembered for something more positive, and the Swedish people have long honored his vision. And although the Swedes have their share of suicides, they have among the lowest mortality rates in the world, with no signs of rising mortality in middle-age. 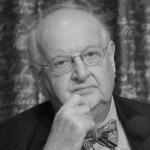 Sir Angus Deaton was awarded the Sveriges Riksbank Prize in Economic Sciences in Memory of Alfred Nobel in 2015 for his analysis of consumption, poverty and welfare. He is Senior Scholar and the Dwight D. Eisenhower Professor of Economics and International Affairs Emeritus at the Woodrow Wilson School of Public and International Affairs and the Economics Department at Princeton University.