What Soccer has to do...
Back
What happens with oxygen in the lungs? How is the fuel in cells formed, and how is it replenished? And why do soccer players never need to use the toilet in 45 minutes? Three Nobel laureates give surprising answers – all three will deliver lectures at this year’s Lindau Nobel Laureate Meeting.   About 3,2 billion people watch the World Cup in Brazil this month, that is almost half of the world population. But what happens inside the body, on a molecular level, when we exercise? Not only muscles and the respiratory system are strained, also the kidneys work at full speed: The body’s entire blood volume is pumped through the kidneys about 300 times each day. This filtering process results in about 180 litres of primary urine, which is again reduced to one or two litres of secondary urine. When we exercise and sweat as a result, less secondary urine is produced to maintain the body’s water balance – the soccer players never need to use the toilet during a game.   During this renal filtering process, up to three billion water molecules per second rush through miniature water channels called aquaporins. Peter Agre received the 2003 Nobel Prize in Chemistry for the discovery of aquaporins – protein complexes in many cell membranes. He now leads the Johns Hopkins Malaria Research Institute, because aquaporins are part of the biology of the malaria-inducing parasites from the genus Plasmodium. Researchers hope to find new treatments against this widespread tropical disease by studying aquaporins. In the human body, those tiny water channels play an important role not only in the kidneys, but also at the blood-brain barrier, in the blood capillaries or in the pulmonary alveoli – which brings us back to the soccer player who is panting after sprinting across the soccer pitch. 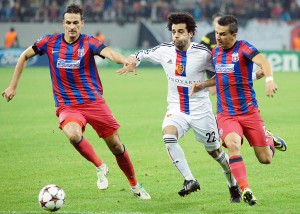 How does the body produce enough energy to run for 45 minutes? The body’s “fuel” is a protein called ATP and is produced in the cells’ power plants, the mitochondria. The formation of ATP requires several enzymes, one of them being ADP: John E. Walker received the 1997 Nobel Prize in Chemistry for the decoding of the enzymatic mechanism underlying ADP synthesis. Besides ADP and other enzymes, chemical energy is needed for ATP formation. This energy is provided by an oxyhydrogen reaction: at the mitochondria’s membranes, oxygen is reduced to water, with the help of electrons. This reaction produces energy, which in turn is stored within the newly formed ATP molecules. Whenever these molecules disintegrate, the energy within is released again. Each adult has about 250 grams of ATP in his body at any time. But since ATP is only an intermediate product, albeit a very important one, the addition of 24 hours ATP production would result in an adult’s body weight – although a soccer player probably produces more ATP than a TV viewer.   A key factor for ATP formation is a protein called Cytochrom c-oxidase. It is located in the membrane wall around mitochondria and provides the electrons for the oxyhydrogen reaction. It also helps protons to cross the membrane, this function is called proton pump. The German chemist Hartmut Michel has studied Cytochrom c-oxidase extensively during his career. In 1988, he won the Nobel Prize for Chemistry for the crystallization of photosynthetic reaction centres of photosynthetic bacteria: it was the first membrane protein that had been described in its atomic structure with the help of X-ray crystallography.   Back to the TV viewers watching soccer: They can rest assured that their kidneys are working hard and that their cells are full of ATP, even if their bodies need less energy than the soccer players’. Now they can fully concentrate on the game – at least as long as the blood-brain barrier doesn’t let too much ethanol pass. 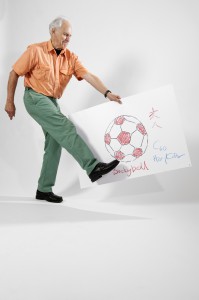 All three Nobel Prize laureates will take part in the 64th Lindau Nobel Laureates Meeting starting June 29th. Videos of their lectures will be posted the very same evening.