Travelling through blood: science fiction...
Back
An artificial nanomotor makes its first successful “voyage” in human blood. The fantastic notion of a team of doctors aboard a ship, shrunk so small that they can course through blood and perform critical surgeries, has pervaded science fiction writing and movies for decades. Mathematician Albert Hibbs proposed the “wild idea” of “swallowing the surgeon”, made famous by physicist Richard Feynman who articulated the challenge of fabricating miniature surgical robots in his hugely popular lecture, There’s plenty of room at the bottom. Now, scientists from IISc Bangalore have succeeded, for the very first time, to steer artificial nanostructures through undiluted human blood. Dubbed “nano voyagers” these tiny swimmers could open the doors to a fascinating range of biomedical applications from targeted drug delivery to microsurgery. Physicist Ambarish Ghosh and his student, Pranay Mandal, from the Centre for Nanoscience and Engineering at the Indian Institute of Science (IISc), Bangalore, had previously studied the dynamics of helically shaped micro- or nano- sized swimmers in water. However, maneuvering these structures through unmodified human blood posed a number of new challenges. Other studies that have attempted to manipulate nanostructures either employ methods that are incompatible with living systems (using intense lasers or harmful chemicals) or, at best, work only in significantly diluted blood. 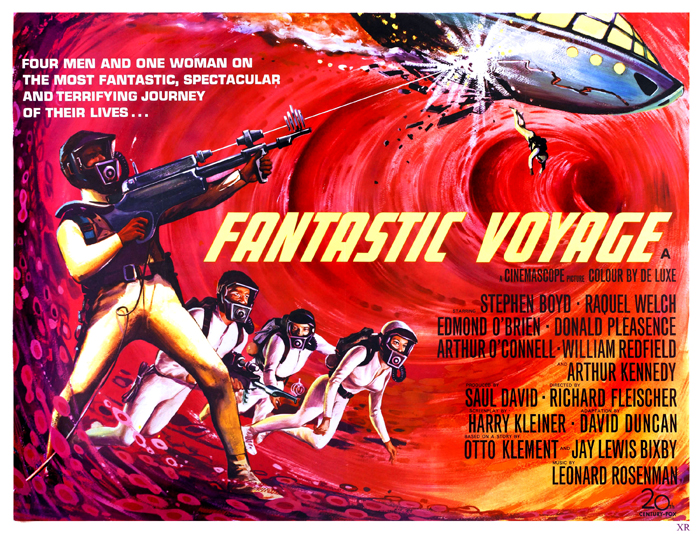 The 1966 SciFi movie ‘Fantastic Voyage’ shows how a medical team gets shrunken down to enter the body of another person to perform critical surgery from within. Image: James Vaughan @ Flickr (CC BY-NC-SA 2.0)

The first attempts of the team were indicative of the long road ahead. “When we first tried to put the swimmers in biofluids, despite repeated attempts, it didn’t work. The swimmers just didn’t move”, recalls Ghosh. The swimmers are made of silica and covered in a layer of magnetic coating so that they can be controlled by a small external magnetic field. The large concentration of ions like chlorides and phosphates in blood and other biofluids, however, can easily etch away most magnetic coatings. Finding a suitable second coating that could protect this magnetic layer and remain stable for long durations proved to be one of their biggest challenges. “It really became a material science problem”, says Ghosh. In the 7-8 months that followed, the researchers tried numerous candidate materials, with no success. In the end, a chance conversation that Ghosh had with a colleague after a conference led to the final breakthrough. The ferrite coating that his colleague’s lab had developed offered the protection they were looking for and remained stable for hours in blood. To top it off, it also passed the cytocompatibility test the team put it through to confirm that the coating is non-toxic – a vital criterion to realize future biomedical applications. 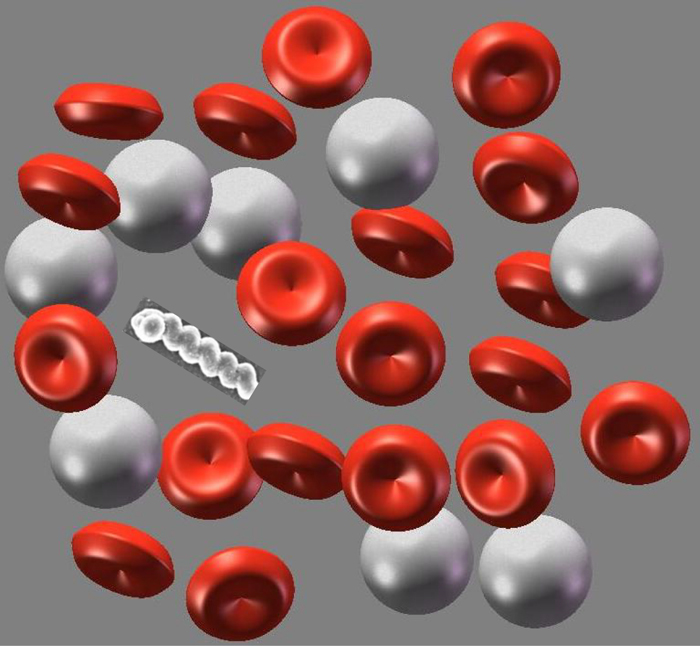 All that remained was to see whether the coated swimmers could successfully move in blood. There was still room for doubt, because, to use a cliché, blood is thicker than water.  At the nanoscale, the viscous drag of water itself appears significant. “The viscosity of blood is around 5 times that of water”, says Pooyath Lekshmy Venugopalan, a student in Ghosh’s lab, who brought this work to fruition. Much to the team’s relief, the coated nanohelices, which they christened “nano voyagers”, worked like a charm. They were successfully propelled through blood by the external rotating magnetic field. In their recent paper on this work, published in Nano Letters, the researchers examine in detail the dynamics of the nano voyagers’ motion. They observed an interesting stick-and-slip motion, which they attribute to colloidal jamming of the blood cells in the plasma. The experiments are still in their infancy, but this powerful system of nanovoyagers holds much promise. “The fantastic idea that nano robots can move through the body and perform surgery… that’s an inspiring vision”, says Venugopalan. This article is an authorised re-posting from IndiaBioScience.org Photo in slider graphic: Andrew Mason @ FlickR (CC BY 2.0)