The ‘Querdenker’: A Bulwark Against...
Back
The annual Nobel Laureate Meeting in the German city of Lindau located at the beautiful Lake Constance is an inspiration hub. Each year, Nobel laureates in the sciences meet up with bright young scientists who are about to embark on their research careers to discuss a broad array of scientific topics and the nature of scientific discovery. These young researchers learn about the Higgs boson, the role of RNA molecules in the evolution of cells, the development of environment-friendly chemical synthesis and many other scientific topics. But what is most inspiring for them is that they get to meet Querdenker. 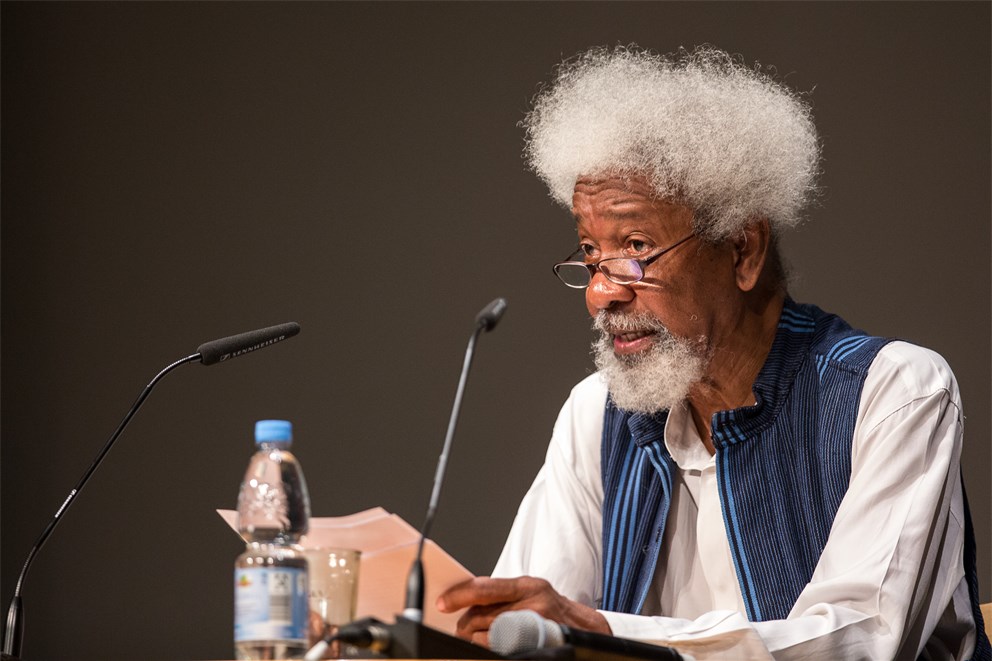 The German word Querdenker consists of “quer” (which can be translated as “cross”, “transverse”, “oblique” or “diagonal”, some sources suggest that the English word “queer” is derived from it) and Denker (thinker). Querdenker could thus be translated as diagonal thinkers or intellectual mavericks, basically thinkers who travel off the beaten path. The scientific discoveries presented by the Nobel laureates hail from very different fields, which is why certain technical aspects can be difficult to grasp. But one common theme emerges in the Lindau lectures and the discussions. Many, if not most, of the Nobel laureates are Querdenker. They received the Nobel Prize because they challenged existing scientific concepts or revolutionized science by introducing innovative technologies which allowed scientists to pursue questions that had previously resided beyond their reach. The impact of their work had a broad impact, often transcending the boundaries of conventional scholarly disciplines. After leaving the Lindau Nobel Laureate meeting, one feels the inexorable desire to challenge some existing scientific dogma or concept. This is easier said than done because we are so often entrenched in conventional scientific views and paradigms. And Querdenker or not, pursuing high-risk, unconventional paths will often lead to failure. Such is the nature of science. But the joy of rebelling against existing scientific concepts, the hope that there is a remote chance of revolutionizing one’s field and the narratives of the Nobel laureates can sustain and motivate scientists despite the poor odds. Science is at its best when it challenges authority. Science is at its worst when it submits to authority. This is true for authority within science such as pre-eminent scientific ideas but also for authority outside of science. One of the darkest chapters in the history of German science took place when scientists submitted to the Nazi ideology of the Third Reich. At the 65th Lindau Nobel Laureate Meeting, a non-scientist Querdenker gave a provocative talk with the title “When Survival is Learning Enough”: Wole Soyinka, who received the 1986 Nobel Prize in Literature. Soyinka is a literary Querdenker, whose plays and novels weave a multicultural quilt of ideas, integrating Yoruba and European culture and styles of narration, defying traditional literary categories. The thrust of his talk was the devastating attack on education perpetrated by Islamist extremists, especially by the group known as Boko Haram in his homeland Nigeria. The precise origin of the name “Boko Haram” is controversial, but according to Soyinka, “Boko” is a corruption of the word “book” and the name indicates that all books (and, by extension, Western education) other than the Quran are “haram”, forbidden. It is not the name that members of this group have given themselves. In fact, they call themselves “Jama’atu Ahlis Sunna Lidda’Awati Wal-Jihad” (“Group of the People of Sunnah for Preaching and Jihad”). But their opponents used the derisive term “Boko Haram” in a derisive sense to emphasize that this group has an overly simplistic, dichotomous view of the world – permitted versus forbidden, Us versus Them – and that they are opposed to all books and education outside of their narrow Weltanschauung. And the name Boko Haram stuck. Why does Soyinka dwell on the importance of the name? “Boko Haram is what you are – philistines and iconoclasts.  Boko Haram is what your actions attest. Language is also an instrument of war”, says Soyinka. We should use language which unambiguously states how we think about murderers and deny them the usage of language which confers legitimacy. Soyinka gives the counter-example of the Islamist extremists referred to as “IS” or “ISIS” by major Western media outlets. “IS” stands for “Islamic State” and the mere usage of the word “State” conveys a legitimacy that they do not deserve. When “IS” murders civilians, it is important to avoid the word “execute” because this again implies a certain form of legitimacy as if these murderers were applying a legally sanctioned death penalty. Who are the targets of Boko Haram? The members of this group have murdered thousands of innocent civilians in Nigeria, but it is “institutions of learning that have borne the most vicious brunt of the onslaught”, says Soyinka. Amnesty International recently released an aptly titled report ‘Keep away from schools or we’ll kill you’: Right to education under attack in Nigeria which details how Boko Haram attacks elementary schools, secondary schools and institutions of higher learning and murders countless students and teachers. Here are some excerpts from this report:

“In February this year, they attacked the school. The gunmen opened fire on everyone around. Two staff teachers were shot. One died on the spot and the other was seriously wounded. We were all devastated. But in March again, four gunmen with masks on their faces attacked the school and went straight to the exams office. They opened fire and shot at everyone in the room. Three people were killed instantly. One was injured. It’s dreadful. We were forced to close the school immediately and asked the children to go home. We remained closed for that entire period.”

– School principal of a secondary school in Maiduguri A community school teacher who had to remain anonymous also described the intimidation and fear that teachers feel in areas controlled by Boko Haram:

“Teachers in northern Borno were particularly at risk because many of the towns and communities were completely outside the control of the government. Even when some teachers continued to teach, they were constantly being monitored by the group. Members of the group will stand outside the classrooms to listen to the lessons. It was like teaching under gunpoint. The situation is worse for us who have received Western education and teach English in the public schools in northern Borno.”

The situation has worsened since Amnesty International released the report in 2013. Boko Haram has continued to murder thousands and also continues to specifically targets schools, students and educators. Why does Boko Haram focus on educational institutions? Soyinka says that members of the group were educated in madrassas, primary Islamic schools in which “where learning is largely by rote”. The pupils memorize the Quran, they are indoctrinated in order to become completely subservient to their teachers and emerge “mentally enslaved”. They have no doubts, no reason to concede that other ideas outside of their Weltanschauung may be equally true or worthy of respect. They fully submit to their indoctrination and they then want to impose this form of indoctrination onto others. “The fanatic lives on submission even as the lung requires oxygen”, says Soyinka. He mentions the tragic irony that religious extremists who reject modern education seem to have no problem using technology based on that same education. The internet is now creating “virtual madrassas”, thus allowing religious extremists to propagate their ideas and indoctrinate vulnerable youth who may be located thousands of miles away.   The question of how submissive education primes the mind so that it becomes fertile ground for extremist indoctrination is important but Soyinka does not discuss this in any detail. In fact, by portraying all madrassas as factories of rote memorization which churn out mentally enslaved products, he runs the risk of creating an overly simplistic dichotomy –“madrassa education” versus “real education”. The Arabic word madrassa merely refers to a place of learning and traditional madrassa curricula dating back to more than a millennium ago have also taught their pupils subjects such as rhetoric, logic, ethics or geometry. The curricula of madrassas have varied widely throughout history and also depend on the cultural-geographic region of where they are located. The idea of a “virtual madrassa” indoctrinating students around the globe is intriguing but it is not clear how this relates to the mental enslavement of students who spend all day memorizing scriptural passages under the auspices of teachers who demand absolute submission. Why do the youth who have grown up in countries where they are exposed to a diverse range of educational and social cues choose to become mentally enslaved? Why do online videos or propaganda material convince hundreds or perhaps even thousands of adolescents growing up in Europe and North America to voluntarily submit and join groups such as IS?   Soyinka offers an important insight into this issue by comparing Islamist extremism and Marxist extremism. Adherents of both ideologies are characterized by emotional fervor and empowerment, “the conferment of superiority that comes with being one of the chosen”. Those who feel disempowered may submit to an ideology which confers on them a status of superiority merely by being its adherents. There is no requirement to think, there is no need to wrestle with self-doubts – all you need is submission. It is a group empowerment, but it is a form of empowerment nonetheless. If submission is indeed the key to group empowerment, then it also becomes clear why extremists attack schools. The ultimate goal of education is to empower our minds. Good schools teach us how to think for ourselves, they encourage us to ask questions and voice doubts. In short, good education enables us to challenge authority. The Lindau Nobel Laureate Meetings bring out the Querdenker in scientists, but all education – whether in the sciences or humanities – to some extent promotes the Querdenker. As such, extremists compete with education for how to achieve empowerment. The former relies on submission to a group, the latter by encouraging dissent and critical thinking. Extremists have to attack educational institutions because the more education a student receives, the harder it will become to indoctrinate her. The Querdenker is the antithesis to the fanatic and as such also our best bulwark against extremism. Those of us who are fortunate enough to live in countries that provide easy access to broad education need to ensure that we preserve this access and that we make it easy for all fellow citizens to feel empowered by education. Encouraging critical thinking and creative expression in the sciences, arts and humanities should be our top priorities and we have to make sure that all members of society – especially those who are marginalized due to their socioeconomic status or origins – can engage in this form of empowerment. Those living in countries with limited access to education or who fear for their lives when they pursue education need our help so that they are provided with this fundamental human right. Wole Soyinka has reminded us that we should not acquiesce to the violence and murders perpetrated by religious extremists but he has also shown us that education is their greatest vulnerability.

Jalees Rehman is a stem cell biologist, cardiologist and an Associate Professor of Medicine and Pharmacology at the University of Illinois at Chicago (UIC). When he was a student in Munich, he used to study the internal clocks of algae. His laboratory in Chicago now focuses on how cellular metabolism affects cardiovascular regeneration and inflammation. Jalees is also a science blogger for the Scilogs blogging network. His blog “The Next Regeneration” covers a broad array of topics related to science and the lives of scientists, ranging from the biology of stem cells to the publication and communication of scientific research.