Synthetic Genes, Synthetic Cells –...
Back
Nature needed about one billion years to create the simplest single-cell organisms that swam around in the primordial soup. Now, scientists are eager to create synthetic life – but better and faster. Hamilton Smith (Nobel Prize in Chemistry 1978 with Werner Arber and Daniel Nathans) started his lecture at the 64th Nobel Laureate Meeting in Lindau with a quote from Richard Feynman (Nobel Prize in Physics 1965):

„What I cannot create, I do not understand.“

Feynman had probably meant physical models, whereas Smith referred to living organisms. In his laboratory at the J. Craig Venter Institute, he tries to create synthetic cells: “I hope that if we create that, we will understand.”   Nowadays, the entire human genome has been decoded. But how a live human being develops from DNA molecules, a human being that can breath, eat, walk, study, love, receive Nobel Prizes and award them – nobody really understands yet. Even for single-cell organisms, this isn’t crystal clear. Even the simplest bacteria exhibit genes without apparent function, that are not essential for life. During evolution, a lot of ‘genetic waste’ has accumulated that might have been useful at some point, but was rendered useless by mutations. Some genetic fragments were in fact smuggled into the genome by viruses, others were created by accidental duplications of genetic segments. Numerous molecular mechanisms lead to many genetic variations – rendering evolution possible in the first place. But over time, many of these genes and segments have become useless. 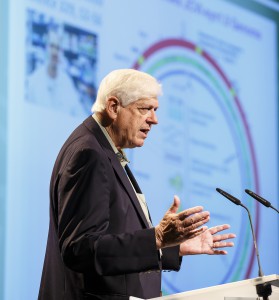 Currently Smith tries to tidy up the genome of Mycoplasma mycoides, a microbe normally living in the digestive tract of ruminants. Originally Smith and his team wanted to use the genome of Mycoplasma genitalium, the bacterium with the smallest known genome – it needs only 475 genes to live. Smith estimates that about 100 of these are non-essential. But since M. mycoides has a much higher cell division rate, although its genome is twice as large, experiments with M. mycoides proved to be more effective. During this ‘minimal cell project’, the researchers switch off one gene after another and study the effects on the microbes. (And the slower the microbes grow, the longer the researchers have to wait for their results.) Smith’s final goal is “a genome that is very understandable – we are searching for the genetic kernels of life”. In sorting out the genes, Smith uses three gene categories. The genes he analyses are either     Smith also assumes that all genes from the last group can be switched off without negative impacts on the microbes. Concerning the middle category, the researchers have to carefully weigh all options. When all is done, the result should be a bacterium that can still multiply rapidly, at least in laboratory conditions that offer plenty of nourishment, constant temperatures, but no competitors. The researchers’ goal is a fifty percent genome reduction in a happily thriving microbe that divides at least once in 100 minutes. 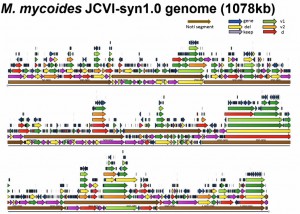 During his Lindau lecture, Smith called the genetic waste “spaghetti code”, a programmer term used to describe some messy program code that was written, for instance, by too many programmers and has become completely chaotic, although it still functions. The tidying up of a code like this is called “refactoring” if the program’s function remains the same. And that is exactly what Smith and his team are doing with the genetic code of a bacterium: Its genome is reduced to the absolute minimum requirements of life, to the “core machinery of life”, as Smith puts it. 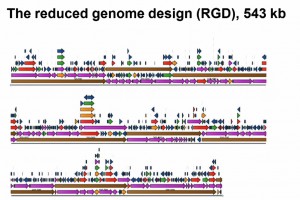 Smith likes using computer terms to describe his work. He compares the genome of any organism with its software, the rest is hardware (the cytoplasm, proteins and enzymes), controlled by said software. As soon as a cell receives a new genetic program, it starts to put this program to use. In order to test their own synthetic programs, Smith and his team replaced the bacterium’s DNA with synthetic DNA containing their basic program. To date, the old ‘hardware’ has not adopted the new program ‘update’. In computer speak, troubleshooting and maintenance are called “debugging”: Smith and his team will be busy with debugging for some time.   But recent successful projects suggests that the researchers might succeed: four years ago, Smith’s team caused a sensation by bringing bacteria to life with a completely synthetic genome designed on their computers. Nowadays automated synthesising machines that can create any DNA form the four original bases, or with Smith’s words: “simply a piece of software written in a four-letter code.” But the researchers did not invent a new bacterium, they copied the M. mycoides genome with a few variations to later identify their creation in the living cell. They transplanted this synthetic genome into bacteria that are closely related to M. mycoides – the new genome took over and controlled the cells, as planned.   Because this experiment confirmed the software metaphor so nicely, it became an important stepping-stone towards creating synthetic life. This novel discipline is called synthetic biology, its goal is the creation of organisms with new biological functions that don’t already exist in nature. Until recently, biotechnologists could only make small changes in genomes, like switching off certain genes or inserting new genes, to give plants, bacteria or animals new functions. Often the resulting bacteria produce some protein that is needed for drug development or production.   But things get more difficult when another substance besides proteins is the target. The 2006 transplantation of an entire metabolic pathway caused quite a stir. The resulting yeast cells were able to produce artemisinic acid, that can be converted into an anti-malaria drug. Thus the transplantation of an entire genome was the next logical step, although the novel synthetic organism doesn’t produce anything useful yet.   All of these developments were only made possible by past discoveries worth several Nobel Prizes. A few examples: Arthur Kornberg won the 1959 Nobel Prize, together with Severo Ochoa, for discovering “the mechanisms in the biological synthesis of DNA“, especially the role of polymerase in DNA duplication. James Watson and Francis Crick won the 1962 prize for their famous description of the DNA double helix. And Smith, Arber and Nathans received the 1978 prize for discovering type II restriction enzymes, enzymes that are able to cut the DNA at specific nucleotide sequences very precisely. Two years later, Paul Berg, Walter Gilbert and Frederick Sanger won the prestigious prize: Gilbert and Sanger had developed a new DNA sequencing method. Today’s hundreds of genome studies published every month were made possible only by these sequencing methods, as well as by the subsequent price slump in genome analysis in recent years. Berg was one of the first researchers to combine genes from different organisms, and is considered one of the founding fathers of genetic engineering. He was also one of its first critics: He co-initiated the Asilomar in 1975, where scientists shaped voluntary guidelines concerning the safety of recombination DNA technology, resulting in a research moratorium about certain gene regions and combinations effective for several years. Finally in 1986, Kary Mullis was honoured for his discovery of a technique to amplify DNA sequences in the lab, making the resulting improved PCR (polymerase chain reaction) the central method in molecular biology.   Without these findings, Smith and his team would not be able to pursue their goal to create synthetic life. They not only want to understand – they also want to apply their knowledge. The novel microorganisms they are trying to create are supposed to produce everything from drugs and biofuel to chemicals. The researcher’s imagination has no limits, only the present-day knowledge. “We can chemically design any DNA sequence,” Smith explains, “but we cannot yet design a gene at the computer with a specific enzymatic activity. We can best modify existing protein designs.” Nature’s programs can be copied and modified, but no synthetic formula for life has yet been found or invented. But computer programmers learn by copying existing programs until they truly understand how the stuff works. Then they can start to get creative.   This article was translated by Susanne Dambeck.

Hanno Charisius is a science journalist and biologist by training. He writes for a variety of German language public media and co-authored books about biohackers and the human gut microbiome.