Smartphones, Energy-Efficient Lamps, and GPS:...
Back

Particle physics and cosmology make up the big topics of interest for many young scientists at the 66th Lindau Nobel Laureate Meeting, with lectures by the pioneering researchers who won Nobel Prizes for their work in the cosmic microwave background radiation, neutrino mass, and the accelerating expansion of the universe. These fields embody the inquisitive and fundamental nature of physics as a discipline driven purely by a curiosity about what makes the world tick.

However, let’s not forget about the importance of more applied topics in physics, such as research in semiconductors, optics, medical physics, and nanotechnology. Physicists in these fields have contributed to groundbreaking developments in technology that impact not only society as a whole, but often affect our individual lives on a day-to-day basis.

Their work often teeters on the fuzzy border between science and engineering — a place Nobel Laureate Hiroshi Amano remains very familiar with. As one of the inventors of the once-elusive blue LED, Amano had a direct hand in the realization of full-color displays that grace our beloved smartphones, as well as the energy-efficient LED lighting quickly replacing incandescent and fluorescent bulbs. 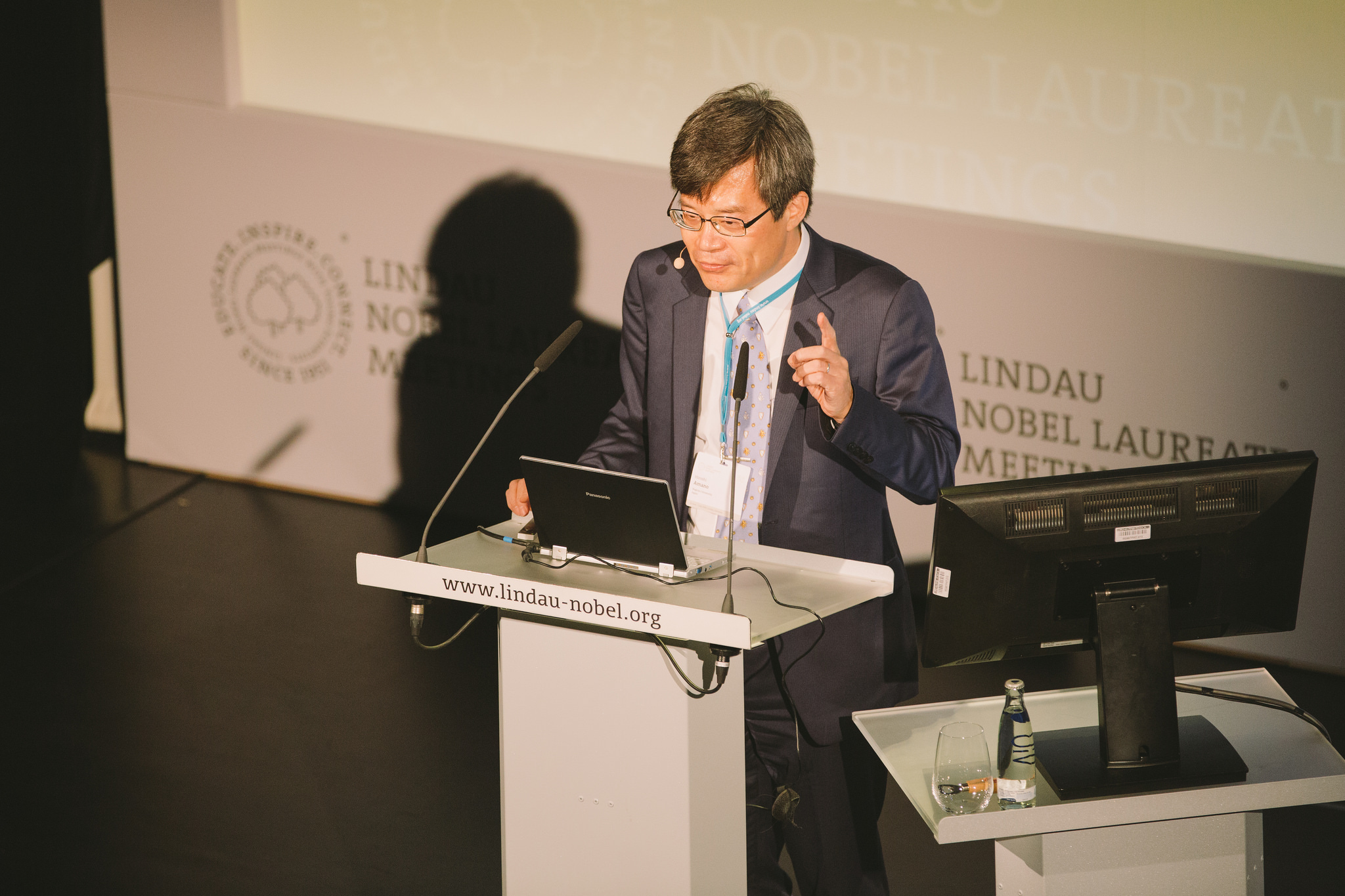 Amano began his lecture by describing his poor academic performance from primary school to high school. Since it seemed to him that the only reason to study hard in Japan was to get into a good high school or university, he lacked sufficient motivation. A former professor changed this mindset by describing the purpose of engineering as a discipline that connects and supports the people. From that moment on, Amano had no trouble finding the inner drive to study hard.

Despite his title as a Professor in the Department of Engineering and Computer Science at Nagoya University in Japan, Amano won the 2014 Nobel Prize in Physics along with Isamu Akasaki and Shuji Nakamura for the invention of high-brightness blue light-emitting diodes (LEDs). For three decades, the creation of a commercially viable blue LED remained a slow-going and difficult endeavor for researchers despite the previous success of red and green LEDs.

“Unfortunately, all the efforts in the 1970s failed,” said Amano, citing issues with growing crystals in the material of choice for blue LEDs, gallium nitride, as well as creating p-type layers. “So many, many researchers abandoned this material and started the new material research such as zinc selenide. Only one person could not abandon this material: my supervisor, Isamu Akasaki.”

In 1985, Akasaki and Amano successfully created their own crystal growth system by using a buffer layer of low-temperature-deposited aluminum nitride that sat between the gallium nitride and sapphire substrate. After a few more tweaks involving the p-type layer, the two presented the world’s first high-brightness blue LED in 1992.

The flashy new blue LEDs could now be combined with their classic red and green counterparts to produce full-color displays for smartphones, computer screens, and televisions. Energy-efficient and long-lasting lightbulbs that emit white light use blue LEDs along with yellow phosphor, and have already started to replace incandescent and fluorescent lighting around the world. By year 2020, the total electricity consumption in Japan could drop about 7% by swapping existing lamp systems to LEDs — a savings of 1 trillion Japanese yen.

Outside of cosmology and particle physics, another fundamental field of physics lies in studying the strange and often paradoxical quantum world. Many quantum phenomena were thought to exist only in a theorist’s mind, since direct experimental observation would destroy the individual quantum systems.

However, the work of Nobel Laureate David Wineland proved otherwise. In 2012, Wineland and Serge Haroche shared the Nobel Prize in Physics for their independent discovery of experimental methods that enable the measurement and manipulation of individual particles without destroying their quantum-mechanical nature. His research has enabled the creation of extremely precise atomic clocks, with more than 100-fold greater precision than the cesium-based clocks in standard use. 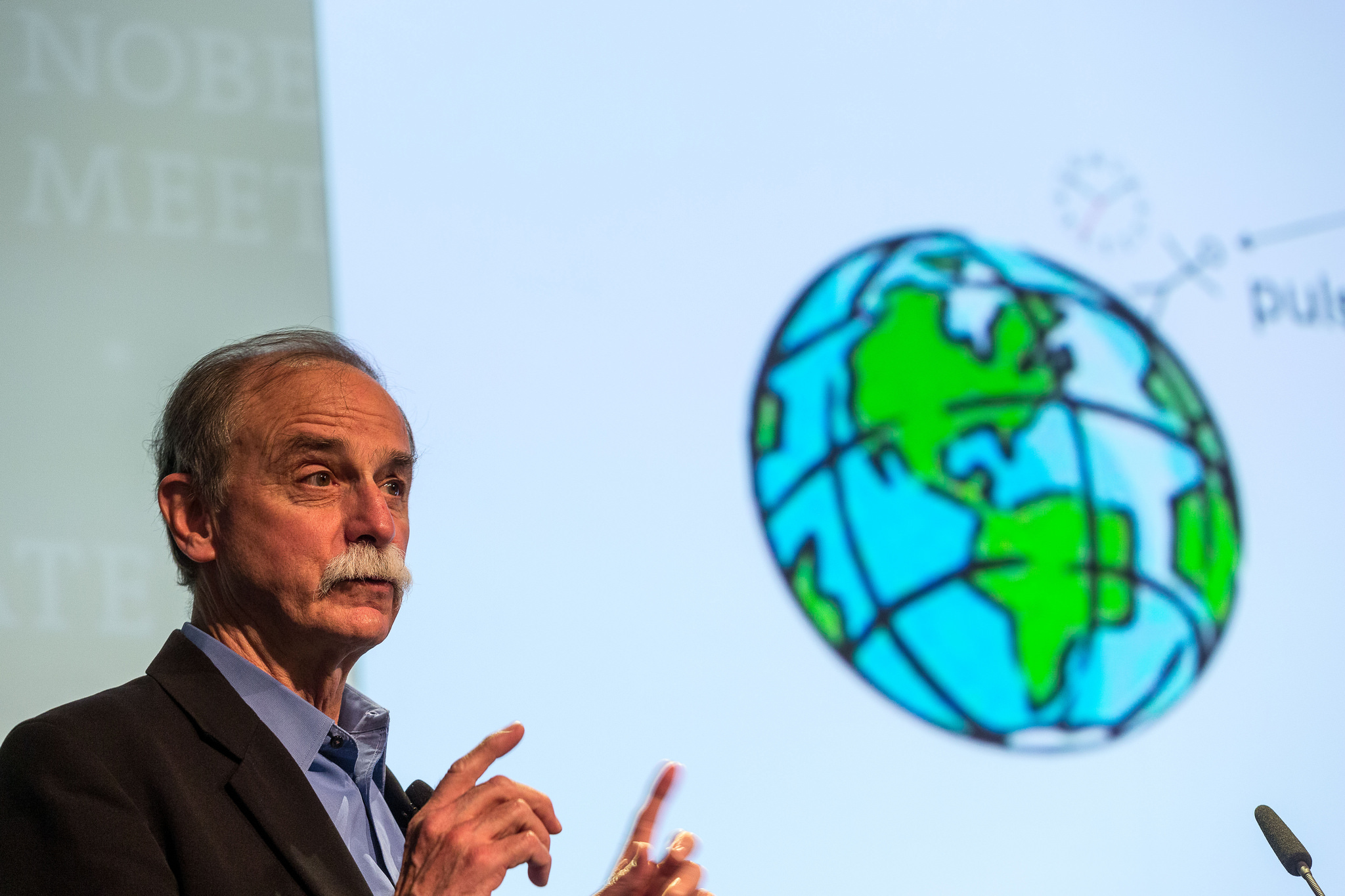 “Certainly one of the applications of precise clocks over many centuries has been in navigation, and that’s still true today,” said Wineland during his lecture on Tuesday morning. “One system we take for granted is the [Global Positioning System (GPS)].”

Signals from satellites orbiting the Earth transmit their position and current time, which are then picked up by a GPS receiver. Given that the signals travel at the speed of light, the calculated time delays between the clocks of multiple satellites and those on the ground can be used to pinpoint the GPS receiver’s location on the surface of the Earth.

“There can be errors in the clocks, so for example if the clocks are synchronized to the nanosecond, then that gives an uncertainty of about 30 centimeters,” he said.

As Group Leader of the Ion Storage Group at the National Institute of Standards and Technology (NIST) in the U.S., Wineland began working on building a better clock in 1979 when he started to do experiments with atomic ions. The group trapped beryllium ions by surrounding them with electric fields and used tuned laser pulses to put the ions in a superposition state, or a simultaneous existence of two different energy states. A single ion trapped in this way could also be used to create an optical clock, based on optical rather than microwave transitions.

An optical clock’s precision can be better than one part in 10^17 — meaning that if you started the clock at the time of the Big Bang 14 billion years ago, it would only be off by about 5 seconds.

At the end of his lecture, Wineland described using his clocks for navigation at a scale of less than one centimeter. Not only would GPS calculations become much more accurate, but such clocks could even measure the dynamics of relative locations on Earth for earthquake prediction.