Searching for SUSY
Back 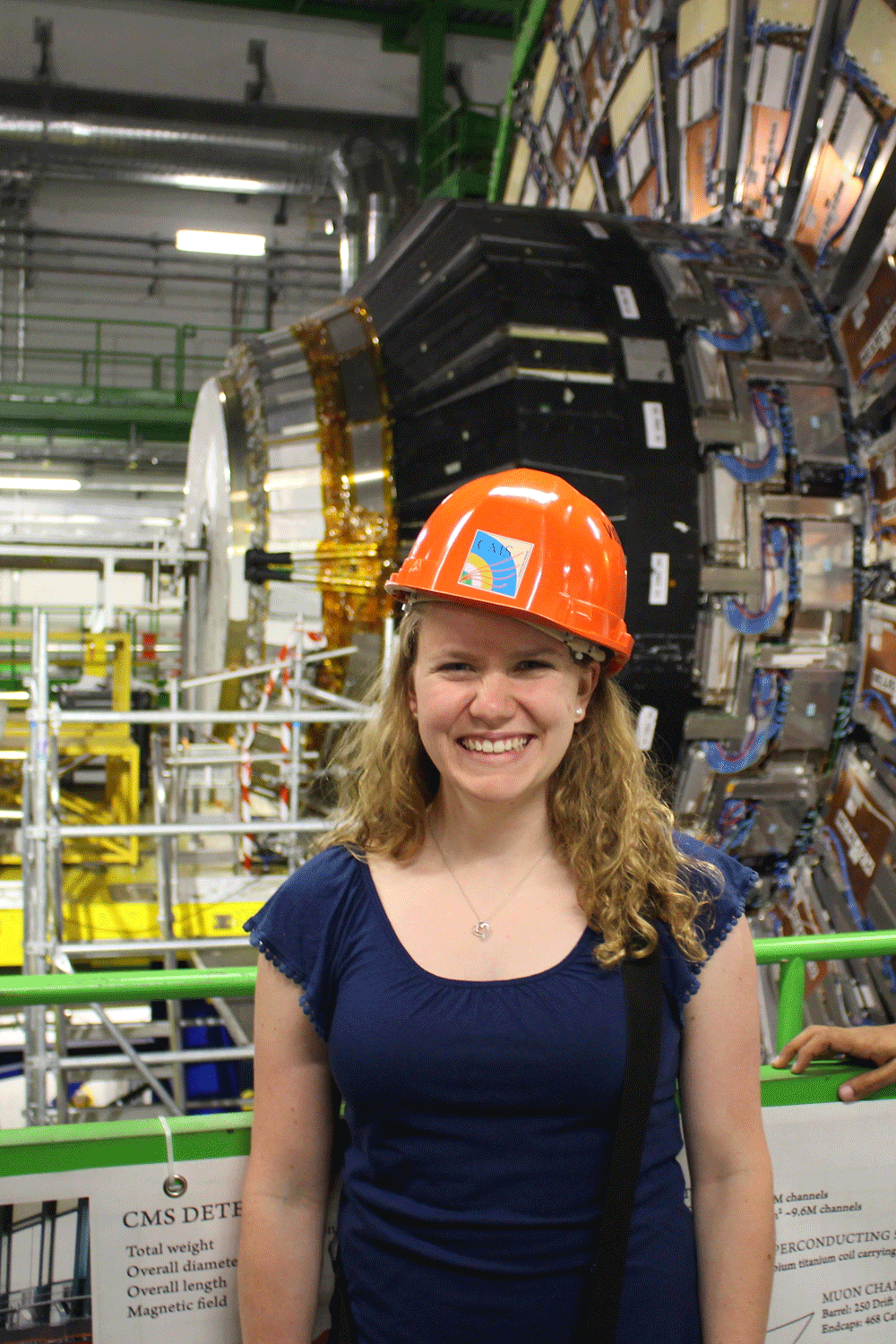 When talking about my research with friends and family, it is sometimes hard to convince them that I’m not pulling their legs. From “squarks” and “selectrons” to “winos” and “binos”, it must sound like I am making up funny-sounding words to mess with them, but all of these words are actually used to describe particles in the theory of supersymmetry.

Supersymmetry, or SUSY as physicists refer to it, is a beautiful, elegant theory. It proposes that all of the elementary particles we have discovered and describe using the Standard Model—electrons, muons, protons, quarks, and so on—have “superpartners.” These superpartners, or sparticles as they are also called, have all of the same properties as their corresponding Standard Model particles, except for a property known as spin. Spin is an inherent property of elementary particles, and it is an essential ingredient when trying to determine how two particles are going to interact. Particles with integer spin are called bosons, and particles with half-integer spin are fermions. In supersymmetry, every Standard Model boson has a partner fermion and every fermion has a partner boson.

Physicists get excited about the theory of supersymmetry for several reasons. One reason is that it provides possible dark matter candidates. We know dark matter exists, but other than that, not much is known about it. Dark matter makes up approximately 27% of the mass and energy of the universe and only interacts with normal matter gravitationally. This makes it very difficult to study. The lightest supersymmetric particle could be one of the dark matter particles we have been looking for.

Supersymmetry is also exciting because it predicts that at high energies, the electromagnetic, weak and strong nuclear forces become unified. This means that we would only need one force and one coupling constant to describe particle interactions. Even though unification of forces does not have to occur in nature, it would certainly be very beautiful if it did, and is one motivation for searching for supersymmetry.

More practically, supersymmetry is useful because it solves what is known as the “hierarchy problem” in the Standard Model. The Higgs mass receives large quantum contributions from any new physics that might be hiding at high energies. These contributions would tend to make the Higgs mass huge, but we know that the mass of the Higgs boson is only 125 GeV. In supersymmetry, this contradiction disappears, because the large quantum corrections from fermions are canceled by their bosonic superpartners and vice versa. This is an elegant solution to the problem without having to resort to “fine-tuning”, which is the scientist’s way to describe contradictions that cannot be explained unless a number of happy coincidences occur.

There is only one problem with this beautiful theory: none of the supersymmetric particles have been discovered. Not one. We have discovered every particle predicted by the Standard Model, including the elusive Higgs boson, but have no evidence for the existence of sparticles. In my research, I search for signs of SUSY particles hiding among the Standard Model particles.

To look for the legendary SUSY particles, I use the Compact Muon Solenoid, or CMS, detector at the Large Hadron Collider (LHC) at CERN. The LHC is the largest machine in the world. It is 27 kilometers (17 miles) in circumference, and is located at the border of France and Switzerland. At the LHC, protons are collided with a center-of-mass energy of 13 TeV. In other words, the protons at the LHC are traveling at 99.9999990% of the speed of light. Protons collide at a rate of 40 billion collisions per second. At this speed and frequency, physicists like me have the chance to observe processes so rare that they could not happen anywhere else on Earth. 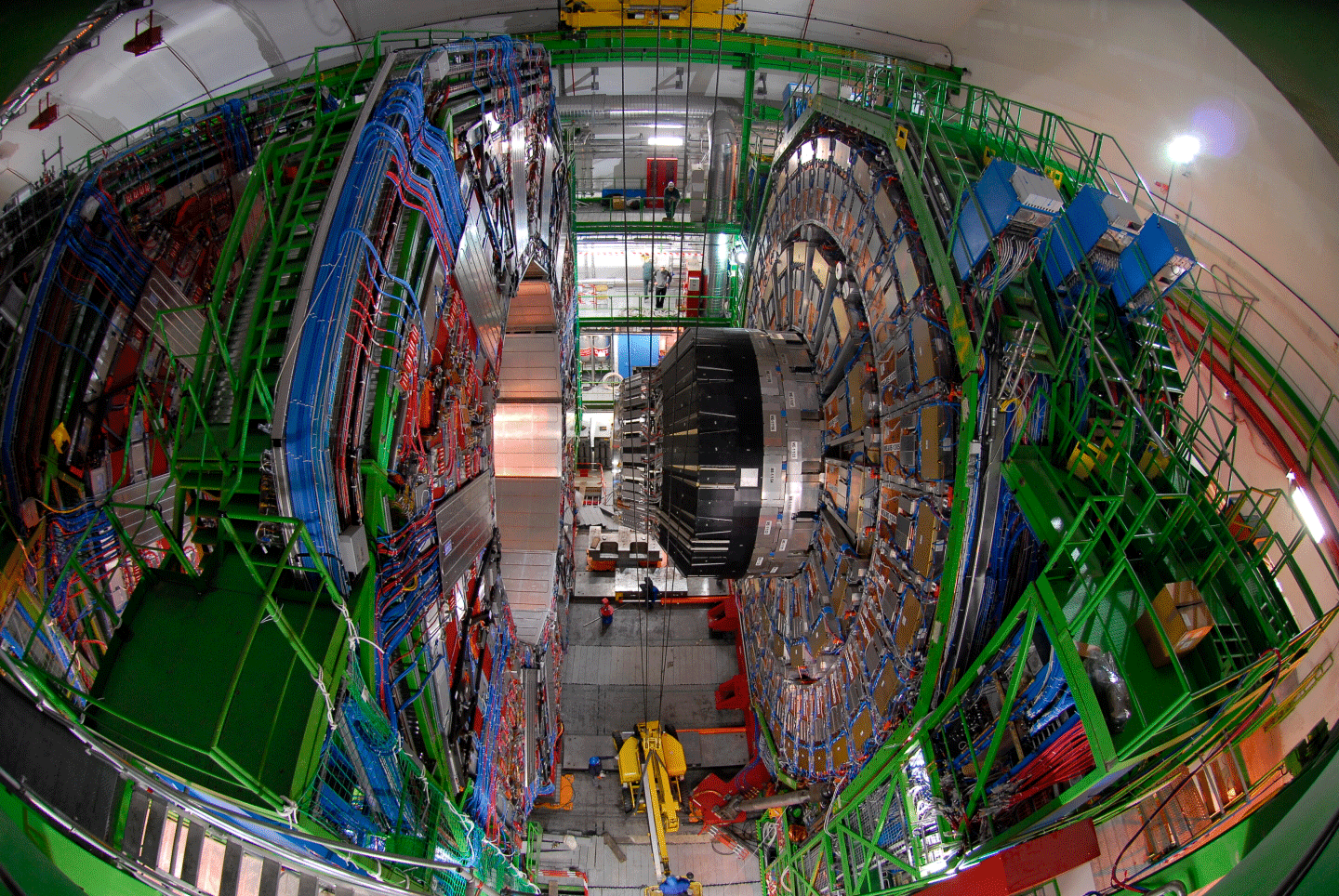 The CMS detector at CERN in all it’s glory. Photo: CERN/M. Hoch

There are four main detectors at the LHC that physicists use to “see” what is happening in the collisions: CMS, ATLAS, ALICE, and LHCb. I am part of the CMS collaboration. The CMS detector is a 14-ton cylindrical detector. It is 21 meters (23 yards) long and 15 meters (16.4 yards) in diameter. At the center of the detector is the beampipe, where the protons collide. Moving radially outward from the beampipe, the first subdetector is the tracker system. The tracker is made of silicon and has over 9 million microstrips and 66 million pixels that allow us to follow the path of charged particles. By looking at how much the particles curve in the magnetic field, we can calculate the momentum of the particles.

After the tracker, particles pass through the Electromagnetic Calorimeter (ECAL) and the Hadronic Calorimeter (HCAL). The ECAL measures the energy of electrons and photons, and the HCAL measures the energy of hadrons, which are particles such as protons, neutrons, and pions made up of quarks and gluons. After the HCAL is the solenoid magnet (the “S” in CMS). This superconducting magnet produces a 3.8 Tesla magnetic field and is what causes the charged particles to curve as they travel through the tracker. Finally, just outside of the magnet is the muon system (the “M” in CMS) that let’s us measure the momentum of any muons produced in the event.

My work is to analyze the petabytes of data produced by the CMS detector to search for collisions that might have included a SUSY particle. Specifically, I look for events with two photons, several jets, and significant missing energy from escaping SUSY particles. Events such as these can occur in gauge-mediated supersymmetry breaking (GMSB) theories.

The LHC was upgraded from 2013 to 2015 to increase the collision energy from 8 TeV to 13 TeV. With this large jump in energy, and with the 2016 data streaming in, we are poised to make exciting discoveries. Someday soon, winos and binos might be as well known as the Higgs boson or the electron, and convincing friends and family that I’m not making words up will be much easier.

Allison Reinsvold Hall, Lindau Alumna 2016, is a physics Ph.D. student at the University of Notre Dame in Indiana. She studies experimental particle physics using the Compact Muon Solenoid (CMS) experiment at the Large Hadron Collider (LHC) outside of Geneva, Switzerland. When she is not working on research, you can find her doing a puzzle, reading a good book, or watching hockey with her husband, Matt.