Science Migration: A Little Bavarian...
Back
Egyptian-born Lindau alumna Ghada Bassioni started her education in Germany. In an elementary school in Dortmund, North Rhine-Westphalia to be precise. She then returned to Egypt where she continued school and later studied chemistry at Cairo’s Ain Shams University. Being emotionally attached to both countries and cultures – calling herself a ‘little Bavarian with pharaonic looks’ – she was happy to return to Germany to finish her Master’s and PhD degrees at the Technical University Munich. Today, Mrs. Bassioni is Associate Professor and Head of the Chemistry Department at Ain Shams University. Having always been an an activist for issues such as science communication, women in research and science in the developing world Mrs. Bassioni became a member of the Global Young Academy to help establish a network of likeminded researchers around the world. Her inspiring story of migration came full circle in 2015 when she had the chance to organise a science day for elementary pupils at her very first school back in Dortmund, Germany. 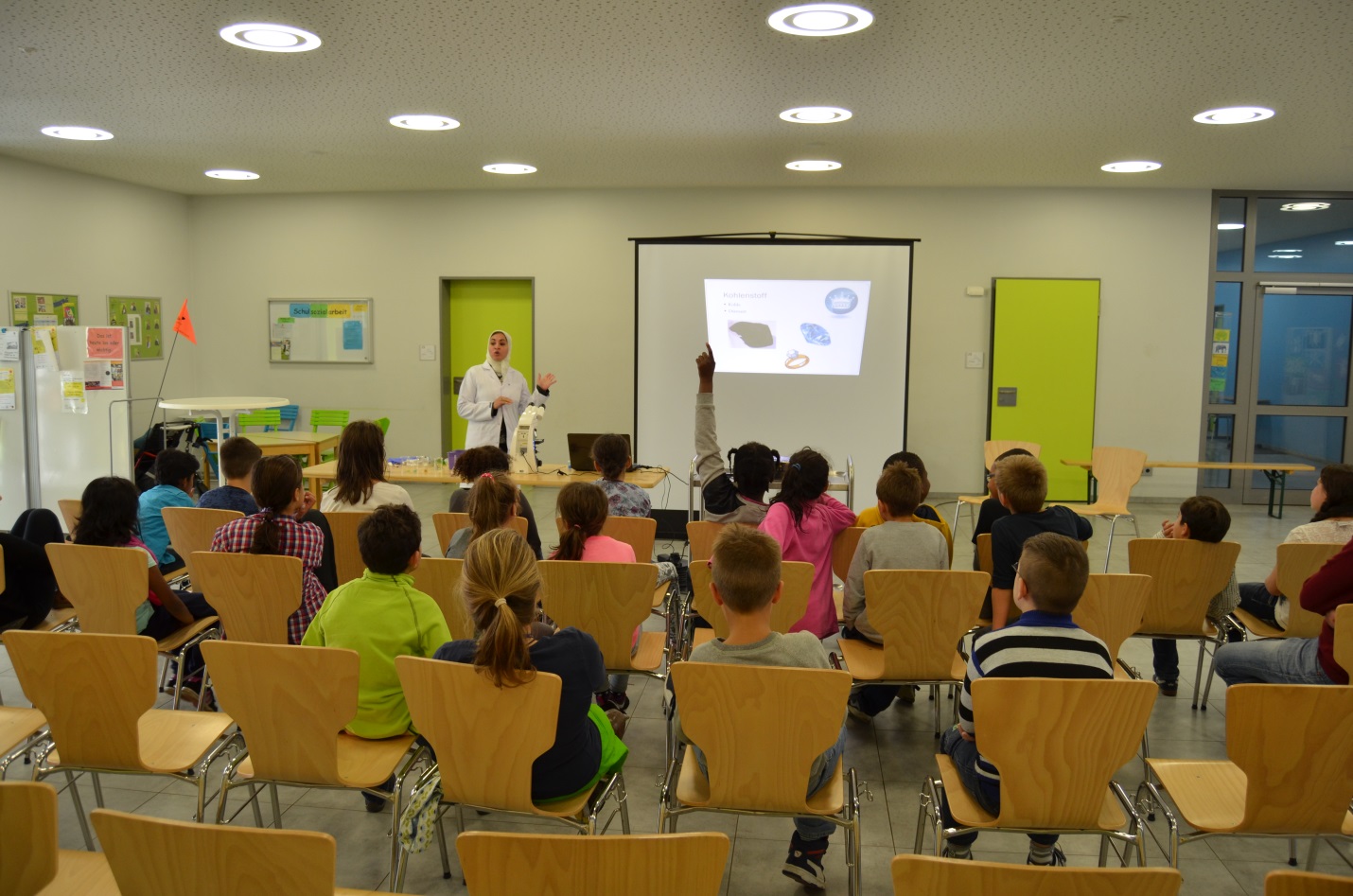 Engaging children with passion for science and fostering their curiosity is crucial at an early age. Photo: Ghada Bassioni

35 years had passed, and yet it was like yesterday. With the help of one of my German friends, I was able to get in contact with the school’s administration. Today the school is called ‘Libellenschule’ (‘Firefly School’). The correspondence revealed that more than 95% of the current pupils’ intake of this school was foreigners. Although North Rhine-Westphalia is basically industrial with a lot of workers from different countries, I remember that during our times, we had a fair balance of around 50% of Germans to foreigners. This fact even encouraged me further to offer the “science day” activity for pupils of the 4th grade (about 10 year old children). It was in a way a ‘comeback’ to show these pupils that “Here at your school this is where my career has started” as an inspiration for them to continue on their own studies. I believe that this will motivate them further to work harder at school and to hopefully go into science, to believe in themselves and their capabilities. Seeing an Egyptian professor speaking the language would also add to the acceptance and tolerance of foreign pupils at school. When I entered the school I had mixed feelings…the school had a new building. It changed a lot over the years, it became more colourful and more children’s friendly. I actually liked the new look and imagined my childhood in these facilities. I was well received from the school administration and was allowed to look into their archives. Excited and still not realizing where I am, I saw the yearbook of 1980/1981. My teachers! A list of my class mates! All hand written in the beautiful “Schreibschrift”(German longhand script). I believe that the child in me came out by expressing every single excitement I felt looking into these files and the school. It awakened in me beautiful feelings that cannot be described on paper. One teacher, the youngest back in 1980, was still active at school in her final year before retirement. I jumped to say Hello to her. What an unforgettable moment! 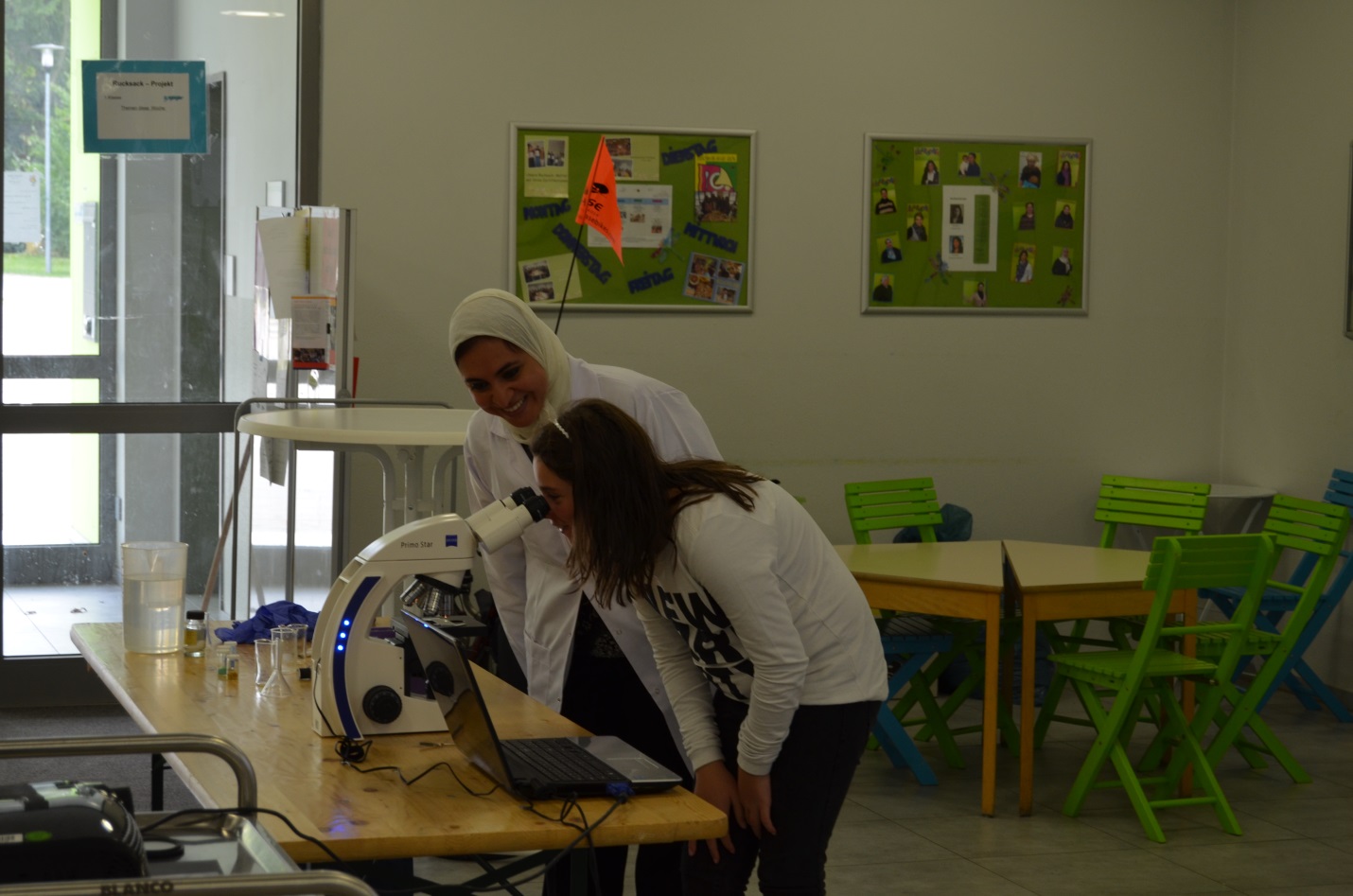 Dr. Bassioni taking a young girl on a journey to the secretive world of the microcosm. Photo: Ghada Bassioni

About 20 pupils of the 4th grade attended the activity. During the preparation phase curious pupils helped me put on the microscope and different samples on the demonstration table. I could already feel their interest to learn more. I started to introduce myself and where I come from showing a map of Egypt. A cartoon described that Egypt had desert with a lot of sand, sea water that is salty and the River Nile with fresh water. The introduction included some broad definitions relating that landscape to chemistry. The ‘science day’ consisted of three main activities: 1. Solubility and Crystallization; 2. Microscopic Investigation; 3. Toxicity in the three aggregation states: gas, liquid and solid. I had brought some samples of sand, quartz and glass and correlated that to crystallization phenomena on one hand and samples of salt and the relation to water salinity on the other. The pupils were allowed to see the samples under the microscope. They answered many simple scientific questions on the basis of a logical approach in a dynamic and very interactive lecture. The term “toxic” was discussed in relation to whether all substances can be toxic at some point. An example of a toxic gas was “Radon” as a main cause for the curse of the pharaoh. It was believed in Ancient Egypt that whoever opened the tombs of the Pharaoh was cursed and had to die. Strangely people who had actually tried got mysterious symptoms like hallucinations and eventually died in the end. Knowing that a scientific explanation gives answers to open questions makes science particularly interesting and useful to mankind. That topic crowned the day and was a clear highlight for further discussions in the school break afterwards. 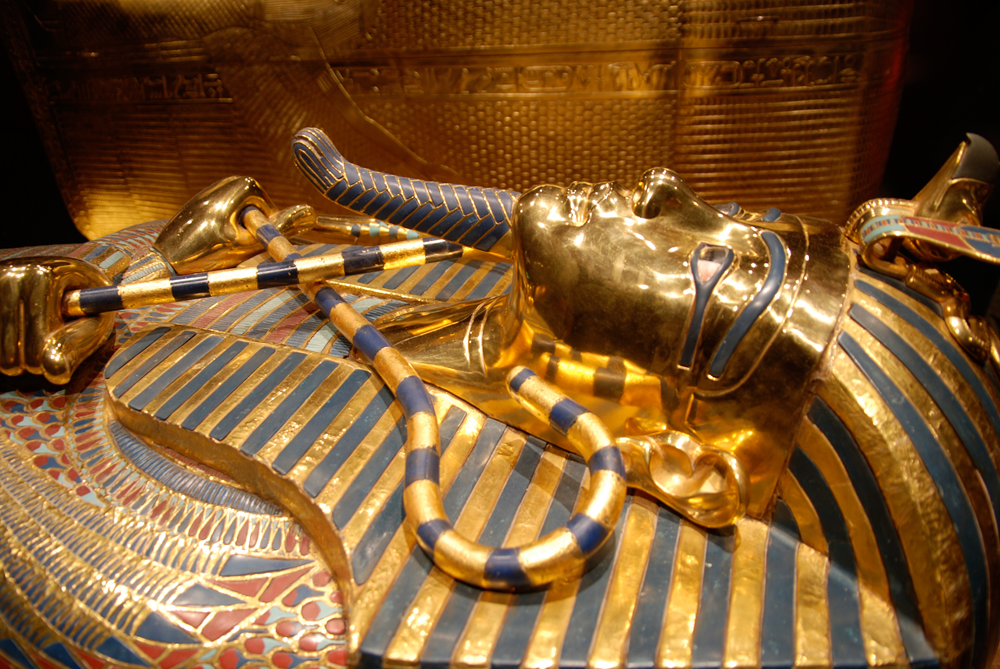 The mask of pharaoh Tutankhamun. The opening of his tomb and the mysterious deaths of archaeologists afterwards spread the story of the pharaoh’s curse in the west. Photo: assalve/iStockphoto.com

I do believe that this kind of activity showers the children with other aspects of life. Children are the best learners and their fascination towards all that is new to them should be used. For them, these simple experiments were like magic, the unknown that needed to be discovered. This can start in a very early age by visiting museums like the natural science museum or concepts like the “Deutsches Museum” in Munich, where children can experience hands-on activities. The image of the crazy professor in the chemistry lab who is preparing the syrup of death can soon vanish once these children understand what the real science is about, how beneficial it is and how much value it is actually adding to society. The Global Young Academy of which I am an Executive Committee member has realized the importance of this kind of activity and has dedicated a special program, the so-called Young Scientist Ambassador Program. Within that program school visits like this one can be funded. It is particularly encouraging to involve professors from developed countries to lecture in a developing country and vice versa. Intercultural and interdisciplinary approaches are a successful trend for dialogue in the scientific community. This concept has been long adapted by the Lindau Nobel Laureate Meetings at which I was invited twice in 2012 and 2014. I learnt how important it is to transfer knowledge on all levels, whether scientific or cultural. Understanding the human being regardless of the background starts with understanding a common basis: we all live on mother earth and shall try to understand it scientifically. Raising awareness and transfer scientific knowledge will eventually save us all.

Dr. Ghada Bassioni, Lindau Alumna 2012, is Associate Professor and Head of the Chemistry Department at Ain Shams University in Cairo, Egypt and also a member of the Global Young Academy. She participated in the 2012 Lindau Nobel Laureate Meeting as a young scientist and returned in 2014 as participant in a panel discussion on science's role in global development.