Science in Spain: Bridging the...
Back
Guest Blogger and meeting participant Cristina Balbas comments on the need for science communication in her home country of Spain. Although it is hard to believe it, more than one week has gone by since the 64th Lindau Nobel Laureate meeting came to an end. Enough time to get back to our routine, but also to allow the unique experience of attending the conference to sink in. As I reflect over the challenges young researchers will face along their careers, I cannot help but feeling it will be especially difficult for Spanish researchers to get society to realize the importance of investing in science. As a Spaniard, I am well aware that we have only had two science laureates in history, and both passed away before the current millennium even started. The relationship between Spanish society and science is rather paradoxical. Overall, Spaniards’ scientific knowledge is low when compared to citizens of other European countries[1]. However, researchers rank among the best-regarded, most prestigious professionals in the country[2]. The two main political parties in the country did not respond to requests for comment regarding this issue, but smaller factions were happy to share their viewpoints. Carlos Martínez-Gorriarán, associate spokesperson for UPyD (Union, Progress and Democracy), pointed at the lack of investment in research and innovation as an important part of the problem: “There is a lack of support within the regular budget, the expenditure assigned to science comes from extraordinary items”, he stated. However, all responding parties agreed that bridging the gap between Spanish science and society requires more than an increased expenditure. “Science dissemination has to be a right for the common people”, declared Eparquio Delgado, one of the promoters of IU (United Left)’s science area. The Science circle of Podemos brings education into the picture to understand the Spanish situation: “We need a lot more education and dissemination to bring science closer to citizens, particularly to students”, they claim. 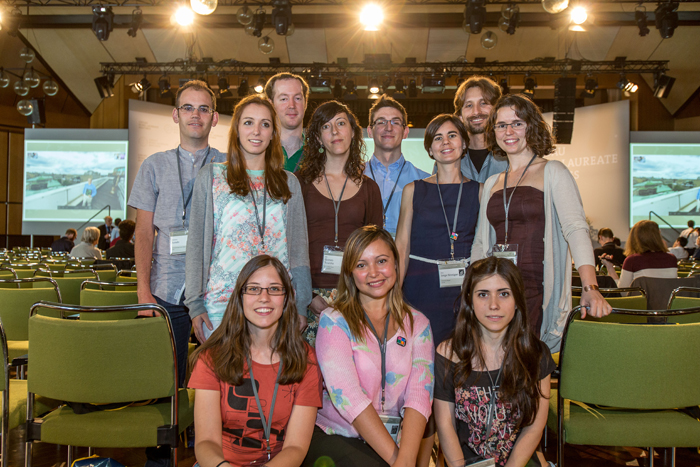 To understand the situation at public universities, I spoke to professors and researchers who have experienced science education both in Spain and abroad. In general, they recognize there has traditionally been a large gap between consolidated researchers and university students. “In general, there is a sort of worshipping culture set in place around great scientific figures”, claimsJesús Sánchez-Ruiz, PhD in Immunology, who has worked at several research institutes in Spain and in Germany. However, more seasoned researchers recognize the situation is slowly improving:“Such distance exists, but there has been a gradual change, [the gap] has become smaller with time”, states Victor J. Cid, Microbiology associate professor at the Complutense University of Madrid. However, Victor recognizes there is still a long way to go before reaching the proximity that is the norm in countries such as the United States, where he worked as a postdoctoral fellow. From my own experience as a student, one of the most effective ways of sparkling student’s interest in research is through the use of real laboratory examples within lectures. Even though the choice to do so is largely left to the teacher, it seems professors in Spain rarely talk about their research in class: “They did not talk at all about their investigations, I became interested in research by personal initiative”, declares Marta Flández-Canet, a Pharmacist who spent 5 years at New York´s Montefiore Medical Center after obtaining her PhD in Spain. Luis César Fernández-Diaz, a postdoctoral fellow who trained in Germany and Italy, points at class size as a possible explanation for this situation. “Professors are overloaded; Spain has an overcrowded system, there are many students, so training is very theoretical, with little room left for practical work”, he states. According to Eurostat 2012 data, Spain is the 4th country in Europe with the highest proportion of students enrolled in tertiary education[3]. The economic crisis has also had to do with universities being overcrowded. Fewer professors are being hired, but enrollment has been steady over the last few years, so teaching hours have skyrocketed. Moreover, there is virtually no budget for science communication activities. Nevertheless, the university community thinks it is feasible to implement initiatives that will bring research closer to students at no cost. “They could organize poster days; researchers usually have posters already prepared for congresses, so they could make them accessible to students”, suggests Mercedes Pardo-Calvo, senior staff scientist at the Wellcome Trust Sanger Institute. Fernando Blasco-Contreras, assistant professor of Applied Mathematics at the Polytechnic University of Madrid, advocates for seminars open to anybody. “In other countries there are non-specialized seminars, which whole departments and students can attend”, he declares. There is a lot of work to do to bring science closer to the general public and students in Spain. As I ponder over this challenge, I reflect on the words of Victoria Flexer, an Argentinian Physical Chemist who attended last year’s meeting: “Many [of the laureates] invited students to play a role in the process of knowledge transfer […], to be proactive in the promotion of education and scientific development in our countries”, she recalls. This year, the laureates also insisted on the importance of bringing research closer to the general public. I am ready to tackle the challenge, and I would like to call out to my peers to partake in this effort, which will be essential for the future of Spanish research.   [1] “International Study of Scientific Culture”, BBVA Foundation, 2012 (available online in Spanish at http://www.fbbva.es/TLFU/dat/Cultura_cientifica_-_Nota_larga_-_07-05__2__FINAL_.pdf). [2] Metroscopia Survey 2013, (summary available in Spanish at http://blogs.elpais.com/metroscopia/2013/01/cientificos-y-politicos-los-polos-extremos-de-la-confianza-ciudadana.html). [3] Eurostat 2012, statistics extracted from http://epp.eurostat.ec.europa.eu/

Cristina Balbas-Martinez, Lindau Alumna 2014, graduated from Princeton University with a BA in Molecular Biology in 2010. She is currently completing her PhD at the Spanish National Cancer Research Centre (CNIO), studying cohesin component STAG2 mutations in the context of bladder cancer. She is also the president of Escuelab, a non-profit organization that creates multimedia educational materials about scientific topics and implements them at schools in the form of interactive workshops.