Science Diplomacy discussed at AAAS...
Back

In 1919, English astronomer Arthur Eddington led an expedition to the island of Principe off the west coast of Africa to try to observe one of the strangest phenomena in science at the time: the bending of starlight by the gravitational field of the sun. The phenomenon could only be observed during a total solar eclipse, when the sun becomes dim enough to track the passage of starlight past it. Eddington’s analysis proved that the light was bent twice as strong as Isaac Newton predicted. The man who trumped the great Sir Isaac’s prediction had until then been a relatively unknown forty year old physicist working in Berlin. His name was Albert Einstein. The observation of starlight bending was the first prediction of Einstein’s then otherworldly-seeming general theory of relativity.

This historical anedcdote underscores one of the finest moments in the history of science diplomacy. The world had seen its first brutal world war end just a few months before. In the middle of all that resentment then, it must not have gone unnoticed that an Englishman had confirmed a seminal prediction of a German’s reworkings of our understanding of the cosmos. In fact it was an exceptional gesture that would go down in history as a measure of the international brotherhood of science.

Some of the same spirit of science diplomacy was on display last week at a panel discussion organised jointly by the Lindau Nobel Laureate Meetings and the Heidelberg Laureate Forum at the annual meeting of the American Association for the Advancement of Science in Boston. It is hard to think of a more pressing time for the meeting, even as the forces of absolutism and bias around the world threaten not just the gathering and discussion of objective scientific fact but also the bedrock of international collaboration on which science rests.

More than any other single country, the United States has been the beneficiary of groundbreaking work by émigré scientists, so it seemed fit for the discussion to be taking place in Boston, especially in light of recent political developments. In fact, the U.S. rose to scientific prominence when Jewish scientists fleeing from fascism in Europe migrated to its shores. It rose to world prominence in diverse scientific fields as these European immigrants and their students, along with others who came to the country during the last few decades from Asia, Africa, Australia and other regions, massively contributed to new scientific discoveries and inventions and won a string of Nobel Prizes. So it also seemed fit to have the panel discussion featuring an international cast of scientists and thinkers.

There was Erik Maskin, the 2007 Nobel Laureate in Economic Sciences who shared the prize for his contributions to figuring out correct economic incentives in a variety of public and private scenarios using the principles of game theory. Another panelist was John Hopcroft who won the Turing Award “for fundamental achievements in the design and analysis of algorithms and data structures”. Jean-Pierre Bourguignon is the president of the European Research Council and a past president of the distinguished Institut des Hautes Études Scientifiques, and is involved in various activities related to science diplomacy. Attesting to the international nature of science and the diversity of its ranks, the panel also featured two young researchers: Brown University mathematics graduate student and alumna of the Heidelberg Laureate Forum Kristina Mallory and Güneş Parlakgül, a research fellow from Turkey at the Harvard School of Public Health and an alumnus of the Lindau Meetings. 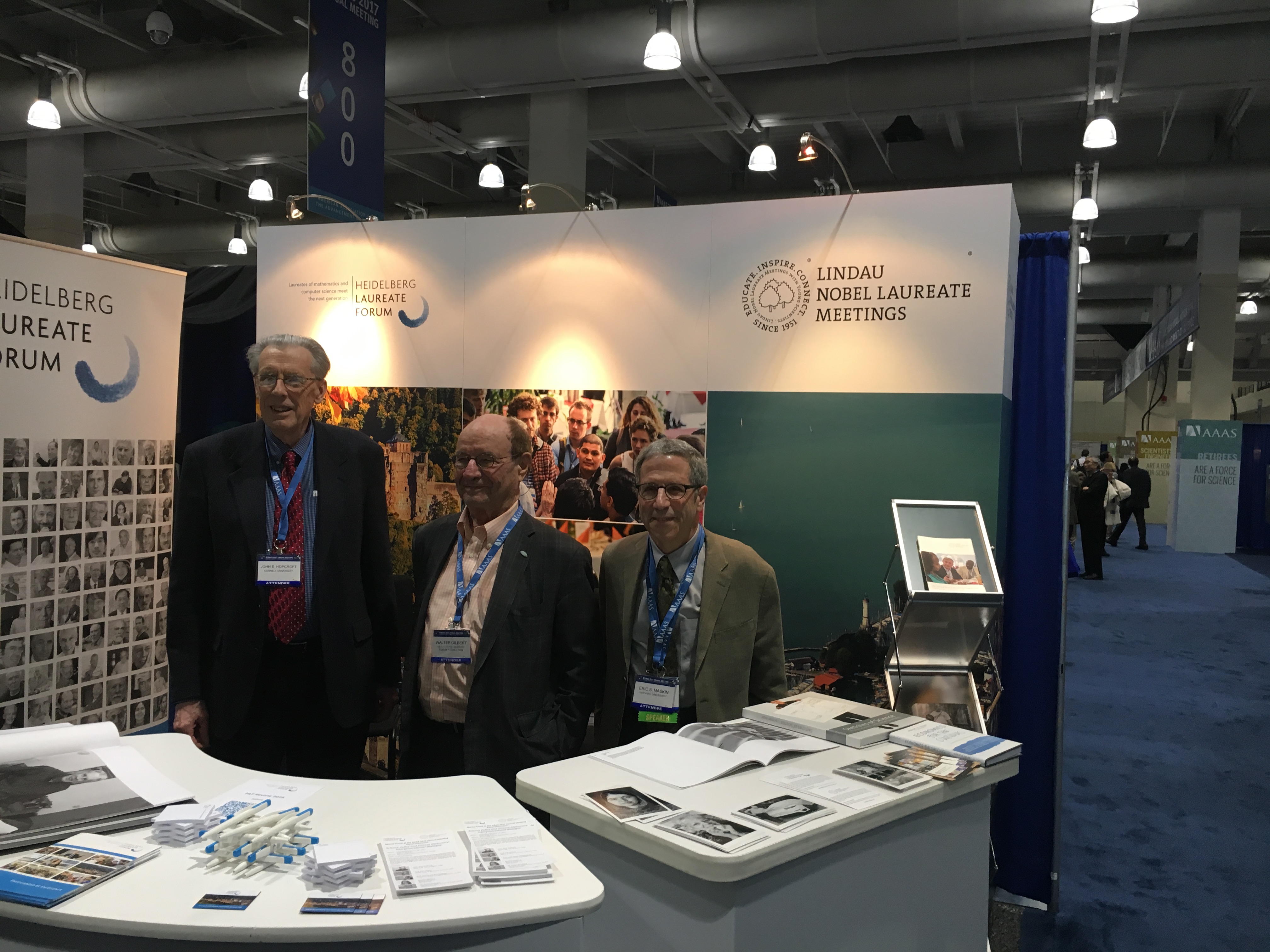 John Hopcroft and Eric Maskin are doing their bit to improve the international dialogue and fruitful application of science to important social issues in their own ways. Much of Maskin’s career has been devoted to understanding how economic theory can be optimally used to improve well-defined outcomes relating to outstanding social problems. One such problem – as should be painfully apparent this year – is the fair design of elections. Although Maskin started working on improving elections before the present crisis, he illustrated the problem quite simply. Consider two pairs of candidates running in two different elections: A and C and B and C. Let’s say voters unambiguously prefer A and B to C in each of these elections. Now imagine a scenario in which A, B and C are all competing in the same election. Since voters prefer A and B to C, they will end up splitting the vote between A and B; C will paradoxically win then although he or she was never the preferred candidate. This is what happens in elections based on vote plurality. Maskin is trying to devise a system for fairer elections in which candidates can be ranked instead of simply picked or rejected.

Maskin also had some wise words about the relationship between science and politics. In generally he does believe that the greatest strength of science is its political neutrality, but there are naturally special situations that do demand interaction between science and politics. The development of nuclear weapons is an obvious example; that of recombinant DNA technology would be another. But particularly pressing are instances when the problem is not so much that politics is concerned with distorting one scientific issue or another, but that politicians seem to not value the basic objectivity of scientific facts themselves. What does one do in these cases? There are no easy answers, but as Maskin indicated, sometimes scientists have to be politically savvy. He gave the example of the current head of the U.S. National Academy of Sciences who intervened to prevent the president from negatively influencing the use of vaccines in this country by appealing to a science-literate hedge fund billionaire who also happened to be a campaign contributor. Sometimes you have to intervene through the right channels, and if you are in a particularly important scientific position it is actually possible to do so. This is a different kind of scientific diplomacy, as important as that between nations.

Kristina Mallory who studies mathematical modeling of epidemics at Brown University had a more pristine view of science, one which has not been without merit in the past; she hopes that scientists can keep doing their job as much as possible, and hopefully the political environment will adapt. There is little doubt that sometimes the results of science are so overwhelming and obvious that politics and society at large have to take notice, but sometimes active intervention is also necessary. Ideally there should be a balance; we need a critical mass of thinkers quietly doing their work, unfettered by the political environment, while another critical mass of thinkers actively place themselves on the frontlines of science policy. 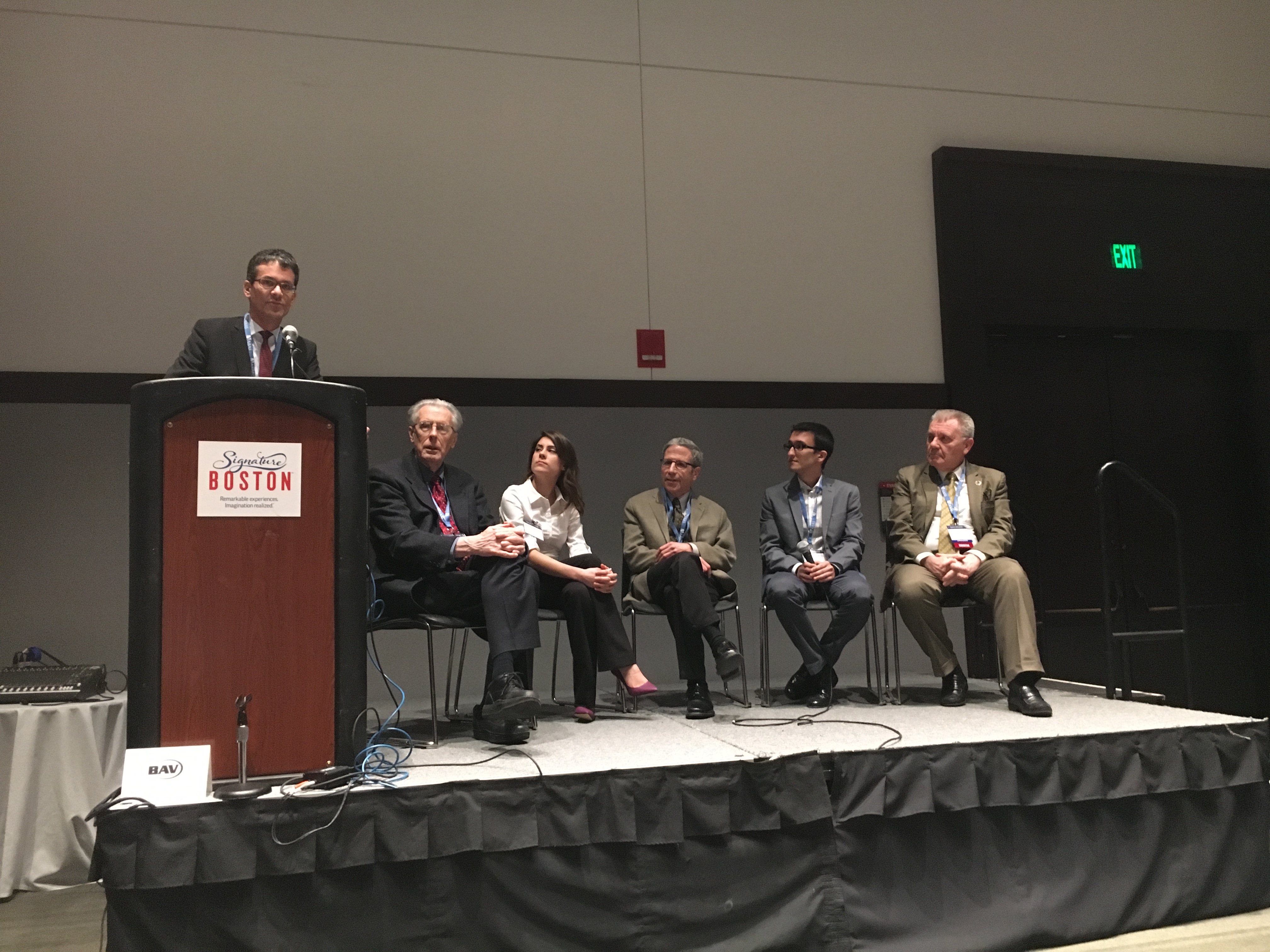 In a globalized world, however, it is the international brotherhood of science, the brotherhood exemplified by Eddington and Einstein, that will be key to harmony and collaboration. Jean-Pierre Bourguignon’s European Research Council supports at least a thousand scientific projects across the world involving seventy thousand awardees, an impressive number. Many of these are focused on the environment and on healthcare issues. He also told us about a an experimental particle physics facility called SESAME in Jordan – in a part of the world that is particularly starved of the stability of scientific institutions – that has been set up for supporting science in the Middle East and for bringing scientists from various Middle Eastern countries together. Some like Güneş Parlakgül want to set up fragments of a system like that elsewhere; at the Harvard School of Public Health where he is researching human metabolism, he is part of the Turkish Biologists Colloquium which arranges symposia, talks and collaborations between biologists in the United States and Turkey.

For the past several years, John Hopcroft has turned his attention to one of the most important global forces in scientific research and education – China. Hopcroft’s emphasis on China partly results from his conviction that through its appreciation of the diversity of people from other nations and cultures, scientific diplomacy is important for world peace itself. There is little doubt that China will be an important hub in research and innovation in the coming decades, and improving Chinese science can ultimately benefit world science. To that end, Hopcroft has been advising the Chinese government at the highest levels. His particular interest – and a personal interest of the Chinese premier – has been to improve the quality of college presidents and administrators through active feedback and metrics.

In his discussion of the Chinese system, Hopcroft made another plea for international understanding when he emphasized not drawing simplistic conclusions from a superficial understanding of culture. For instance, it is well and good to say that China should adopt Western-style liberalism and democracy overnight, but one needs to appreciate that this can lead to structural instability if attempted too quickly. True diplomacy, both scientific and otherwise, comes from forward thinking combined with empathetic understanding of the present.

Overall the panel discussion ended on a positive note for the future of science diplomacy, a note whose positivity is sorely needed during these troubled times. The path ahead will not be easy, but as long as we support and understand each other, as long as we organize panel discussions like these which make people appreciate the international nature of science, we will move ahead together. All we need to do is have the Eddingtons and Einsteins among us keep finding each other.

Ashutosh Jogalekar is a scientist and science writer based in Boston, USA. He has been blogging at the “Curious Wavefunction” blog for more than ten years, and in this capacity has written for several organizations including Scientific American and the Lindau Nobel Laureate Meetings. His literary interests specifically lie in the history and philosophy of science.