The research career offers a variety of opportunities across sectors. Rachel Glennerster weighs up the differences between the policy world and academia for early career researchers looking at their options. Whilst both may be intellectually challenging environments, the reward structures, collaborative potential and research scope are substantially different and personal preferences of these variations may play a big role in deciding which one would be preferable. As someone who worked as a policy economist for many years (at the UK Treasury and the IMF) before going into research, I am often asked for advice from those trying to decide whether to go into a career in policy or academia. With job market candidates making those decisions now, I decided to summarize my advice in writing. I think this is particularly important because many PhD candidates only get input from academic advisors–most of whom have no firsthand experience of working in policy (although that does not always stop them passing judgment on policy work).

Up for debate: Pursuing a career in policy or academia? Photo: R. Schultes/LNLM

I should stress that I am not talking about doing a research job at a policy institution (like being in the research department at the World Bank or a federal reserve bank). I am talking about jobs where you help set policy, like operations jobs at the World Bank or IMF, or in a government department. Judging these institutions by their research departments (as many academics do) is like judging Cal Tech by only looking at its music department. Policy and academic work are equally intellectually challenging, but in very different ways–and which one is suited to you will depend a lot on your personality. For example, academia can be a pretty lonely profession. Papers are written over many years with only intermittent feedback from colleagues. However, you have a lot of autonomy in terms of what you work on and how you do your work. In policy, deadlines are much shorter (I once had to estimate, in twelve hours, the impact of the war in Kosovo lasting another three months on its neighbor’s balance of payments). You are also part of a collaborative process. There is no way, for example, to do a balance-of-payments projection in isolation from the fiscal and monetary projections. In policy you also have a boss, which can be the best or worst thing about your job, depending on the boss. 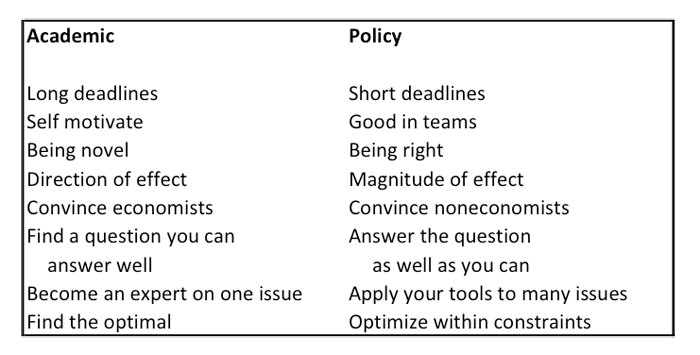 The questions that are worked on and the reward structure are also very different in each field. Academia rewards findings that are different and unexpected. In policy it is more important to be right than novel—after all, millions of lives may be impacted by a policy decision. In academia, people argue a lot about the direction of an effect but very little about the magnitude: in policy it’s the reverse. While academics argue whether government borrowing could impact GDP, policy economists argue whether a particular country should have a deficit of 3 or 4 percent of GDP. In academics, people often become increasingly specialized. In policy you have to be able to use the basic tool box of economics and apply it to any problem that might get thrown at you. In a few years at the UK Treasury I worked on: introducing greater market forces within the National Health Service; the extent to which current trade imbalances reflected different demographic profiles across countries; what proportion of UK bonds should be long-term, short-term or index-linked; and whether a proliferation of new stock exchanges would undermine price revelation. When I first heard graduate students talking about the challenge of finding a problem to work on I was stunned. This was not a problem I had ever faced. And this gets to the heart of the difference: in academics you look for a problem you can answer well, and in policy you find the best answer you can to the problem you are given.

“In academics you look for a problem you can answer well, and in policy you find the best answer you can to the problem you are given.”

Finally, in academia you have to convince other economists. In policy the challenge is often to persuade noneconomists. There is the added challenge of solving the economic question within the relevant political constraints and framing the solution in a politically acceptable way. Whether you find this irritating or exciting could help you decide which job is right for you. I was 21 and had been at the UK Treasury a matter of weeks when a small group of us were told, “Your job is to slip some common sense past the prime minister without her noticing.” Now that’s a challenge. This article was originally published on RunningRES.com and is reposted with permission from the author.