Panel Discussion: Strategic Behaviour, Incentives...
Back
Meeting participant Andrew Gimber on the lively discussion that took place at #LindauEcon14. Last week I had the privilege of attending the 5th Lindau Meeting on Economic Sciences, along with around 460 other young researchers, 17 Nobel Laureates (16 in Economics and one in Literature) and many other guests. One of the highlights for me was the panel discussion on “Strategic Behavior, Incentives, and Mechanism Design”, featuring Martin Hellwig, Eric Maskin, James Mirrlees and Roger Myerson. The discussion tied together themes from several Nobel Prizes, including the work of Leonid Hurwicz (founder of the field of mechanism design) and William Vickrey (best known for his work on auctions), who have passed away since receiving their Prizes. During the Q&A (at 01:06:28 in the video), I posed the following question to the panel:

“The recent financial crisis seems to suggest that moral hazard is a big problem in the financial sector. Who do the panel think has the right knowledge and incentives to monitor banks’ risk-taking and discipline their behaviour: regulators, shareholders or creditors?”

Martin Hellwig was the first to reply, noting that the question “defined a very interesting research programme”, and added that we should try to design mechanisms to deal with incentive problems in a robust enough way that they don’t become obsolete when the nature of social interactions changes. Referring back to Peter Diamond’s methodological point about choosing appropriate models (26:30 in his plenary lecture), Professor Hellwig suggested that models in which excessive risk-taking is related to borrowing would be useful for thinking about the problem of moral hazard in the financial sector. Roger Myerson pointed to Jean Tirole’s work in corporate finance on incentives for managers (perhaps his classic paper with Bengt Holmström, “Market Liquidity and Performance Monitoring”, Journal of Political Economy, 1993), and mentioned capital requirements and bail-in as ways of providing the right monitoring incentives for banks’ owners and creditors, respectively. He also warned that viewing regulators as impartial mediators might be dangerous, because there’s enough money in the financial system to create a serious risk of corruption. He said that the incentive constraints of regulators need to be taken into account, and that transparency and democracy are needed to make regulatory commitments credible. 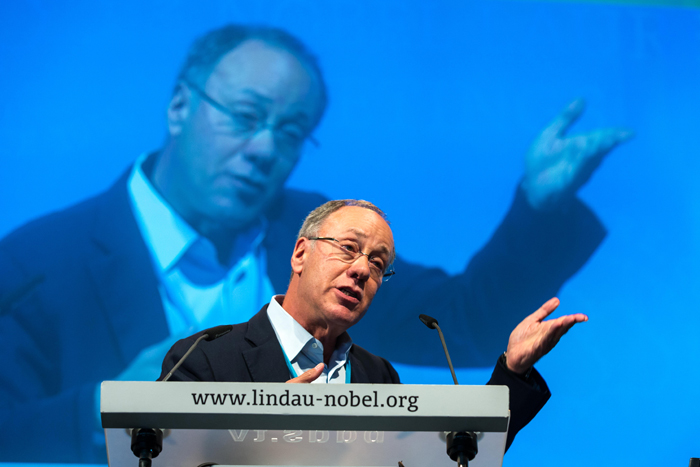 James Mirrlees suggested that the question as posed isn’t necessarily one that theorists alone can come up with an answer to. He noted that theoretically optimal contracts to deal with moral hazard are very complex and require exclusionary clauses, but that from a practical standpoint it doesn’t make sense to write contracts that cover all possible contingencies. Eric Maskin’s view was that the impracticality of optimal contracts implies that regulation is needed. Roger Myerson added: “One of the basic insights of this whole literature was that there’s a tradeoff between insurance and moral hazard…perhaps before 2008 we should have been worried about seeing such creativity in finding new ways to share mortgage risk so broadly and thinly.” At the end of the session (01:29:40 in the video), Martin Hellwig returned to this point. He recounted that, while travelling in the United States in the mid-1990s, he was told about a “great new device” called securitisation (packaging mortgage loans together and selling them on). When he expressed scepticism that a bank in Japan could really know enough about the value of property and the creditworthiness of borrowers in Iowa, he was told that the law of large numbers means that risk disappears. Hellwig’s view was that the failure to anticipate the dangers of securitisation stemmed from a confusion between two notions of risk—deviations from the mean versus the probability of something bad happening—and that this highlights the importance of using precise language when doing economics.