On Man and Microbes –...
Back
In the summer of 1984, the Australian scientist Neil Noakes took some bacteria from a petri dish, mixed them with lukewarm beef extract – the normal nutrient solution for bacteria in the lab – and filled a little more than one cup into a beaker. Then he handed this mix to his colleague, the gastroenterologist Barry Marshall, who downed it without complaining. Three days later, Marshall felt nauseated and his mother told him he had bad breath. Next he started vomiting. But he still waited a few days before taking the antibiotics that were supposed to kill the bacteria in his stomach. A gastroscopy not only clarified his diagnosis, but ultimately resulted in his winning the Nobel Prize in Physiology and Medicine about twenty years later. With his famous self-experiment, Marshall was able to demonstrate that Helicobacter pylori bacteria can cause acute gastritis which in turn may cause ulcers. He had asked neither an ethics commission nor his wife for permission to conduct this experiment. His colleagues thought him completely insane to take a risk like that. 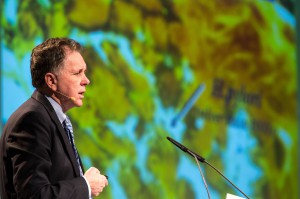 Back in the 1980s, the prevailing theory was that gastric ulcers were mostly a psychosomatic affliction caused by too much stress. Accordingly, patients were treated with tranquillizers, anti-depressants, psychotherapy or antacids. Instead the young doctor Marshall treated them all with antibiotics, and his results were impressive. From his clinical practice, he developed the theory that the spiral-shaped Helicobacter bacterium causes gastritis, painful stomach ulcers and even stomach cancer. Because he had had no suitable test animals at hand, he used his own body for the described experiment. From this moment on, the only good Helicobacter was a dead one. Loads of antibiotics were used to combat this germ. Some experts even wanted to eradicate Helicobacter as a precautionary measure. And Marshall received the Nobel Prize in 2005, together with his former co-worker Robin Warren. In the meantime, even Marshall has become more sympathetic when he talks about the germ that made him famous – almost as if it where an old friend. During his lecture at the 64th Lindau Nobel Laureate Meeting, he points out that this single-cell organism might even help to fight some diseases. Indeed, H. pylori is one of humanity’s old friends and companions: the germ has been with us for at least 50,000 years, and probably longer. Roughly fifty percent of all humans carry it around in their stomachs. Interestingly, the percentage of infected people has been decreasing since the 1950s, with richer countries having much lower rates than the rest of the world. In the US, less than 25 percent of adults and only about 5 percent of all school children are infected. Marshall says that better hygiene and clean drinking water are responsible for the bacteria’s eviction. Doctors claim that Helicobacter is responsible for three out of four stomach ulcers, two thirds of all gastric tumors and practically all duodenal tumors; the duodenum is the part of the small intestine that comes directly after the stomach. So its extermination should be a good thing – shouldn’t it? But at the same time as the germ was retreating, other health problems occurred. Since the 1950s, the number of patients with allergies, asthma or autoimmune diseases has sky-rocketed. Children without Helicobacter in their stomachs are more likely to suffer from skin allergies or hay fever. The bacteria also seem to provide a certain protection against coeliac conditions, also known as wheat gluten intolerance. The bacteria might even manipulate our appetite: the New York based doctor Martin Blaser assumes a connection between its eradication and the growing obesity problem worldwide. Blaser was in fact one of the first scientist who noticed that the germ is not only causing harm. He first thought about its positive aspects when he saw data on patients with stomach ulcers, who seldom suffered from heart burn or esophageal cancer. On the other hand, people without Helicobacter in their system don’t develop many ulcers, but are much more likely to have heart burn and reflux problems, sometimes even resulting in cancer. Nowadays, even Barry Marshall sees the germ’ two faces – the dangerous and the helpful. Many studies suggest that H. pylori is an important training partner for our immune system: it seems to be able to contain the immune response. If the bacteria are missing, our immune system over-reacts when confronted with pollen, wheat gluten or peanuts. Marshall thinks that this connection was a vital mechanism during human history: when groups of homo sapiens’ left Africa in prehistoric times, these bacteria prevented them from developing severe allergies against all new plants they encountered on their long journey. If they had stayed in Africa and only eaten plants and animals from their immediate vicinity, no slow down switch for the immune system would have been necessary. “One theory says that only with the help of these bacteria, we humans were able to adapt to a varied diet”, Marshall explains. So now, instead of fighting his favorite germs, Marshall focuses on studying the effects of reinfections of humans. But not with a gulp from some meat extract, as he did in the past. There are many different H. pylori variants that vary greatly in aggressiveness. Only the more harmless should be used for experiments like that, says Marshall, who already secured patents in that area of interest. Whether reinfection really offers a certain protection against allergies is currently tested on mice in several research groups. But even humans are swallowing these germs again in the name of science, Marshall is currently planning clinical studies. But he expects adults to profit only little from his results. Contact with these microbes seems to be crucial in the first few years of life during the development of the immune system. But the thought to give bacteria to newborns that might later cause cancer makes most people feel uneasy. Another idea will probably be more easily accepted: We can only provide the components of the bacteria that are needed to keep the immune system in check, Marshall said. This shouldn’t cause inflammation but could still help to curb our immune system. Molecules on the bacterium’s surface would be possible candidates for this job. Although Marshall talks more in a friendly way about his former opponent now, in one situation he remains uncompromising: “If the bacterium causes trouble, it has to go.” As long as it makes no problems, it may stay. But there are very effective antibiotics to get rid of it. Besides Helicobacter pylori, more than 1,000 other types of bacteria live on and in the human body, resulting in a total number of about 100 trillion bacteria. So there should be no lack in substitute training partners for our immune system. Original in German here. Translation: Susanne Dambeck

Hanno Charisius is a science journalist and biologist by training. He writes for a variety of German language public media and co-authored books about biohackers and the human gut microbiome.