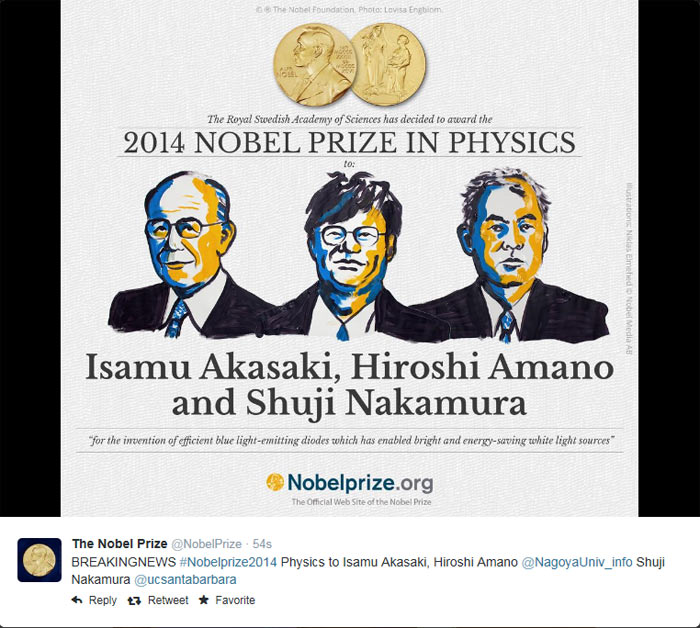 Screenshot of the news-breaking tweet the Nobel Foundation sent out following the announcement of the prize winners. Part of the graphic was used in this post’s slider image – all rights remain at the Nobel Foundation, Nobel Media, Lovisa Engblom (photographer) and Niklas Elmehed (Illustrator).

The invention of blue LEDs 20 years ago had a big impact on human lives. Before the three Japanese born scientists’ research there were only green and red LEDs available. These however were not able to create white light which is necessary for implementing mass lighting technologies. With the trio’s blue LEDs it was finally possible to create white light LEDs which are a lot more efficient and environment-friendly than the methods that were available before and can also be used for public lighting in cities and other places. The Royal Swedish Academy of Sciences now honoured this revolutionary innovation by bestowing Akasaki, Amano and Nakamura with the most well regarded title in science. Optics in general is thought by many experts to be one of the driving forces in future technological advancement. The UNESCO even declared 2015 to be “The International Year of Light”. Regardless of what awaits us in the future, with dedicated and passionate scientists like Akasaki, Amano and Nakamura unravelling ist mysteries it surely will be bright. The slider graphic of this post contains photo material from Boby @ FlickR (licensed under Creative Commons).