Nobel Prize 2014: Lighting Nano
Back
The recipients of the 2014 Nobel Prize in Chemistry turned micro- into nanoscopy.

“the development of super-resolved fluorescence microscopy.” 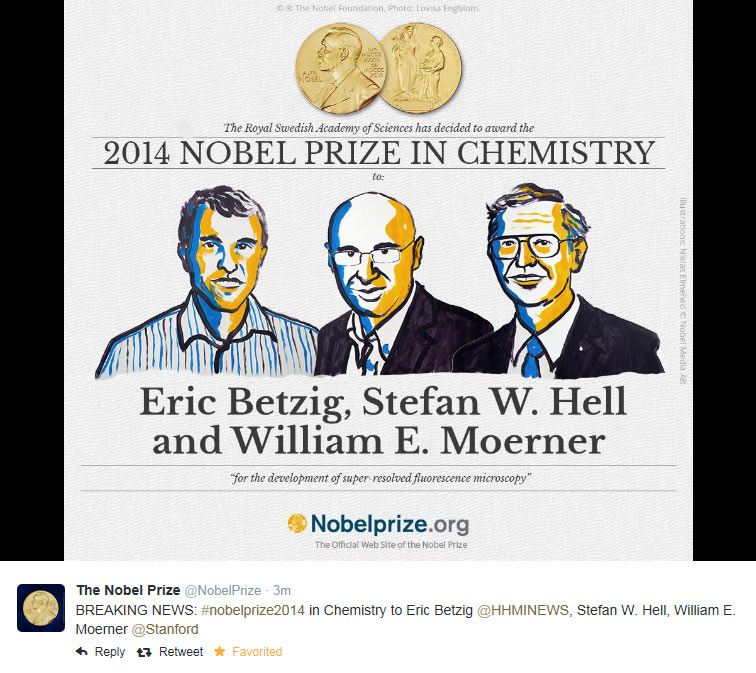 Being defiant sometimes pays off big. In the case of the three professors Betzig, Hell and Moerner their defiance  has earned them the Nobel Prize in chemistry today. All three didn’t want to accept the fact that there were limitations microscopy could not surpass. Before the now jointly-honoured work these men have separately done it was believed that microscopes would never be able to display images of things smaller than 0.2 micrometres in good resolution. This theory was called ‘Abbe’s Infraction Limit’ (named after German optics pioneer Ernst Abbe). It was published in 1873 and hold up for about 100 years – until Betzig, Hell and Moerner independently from each other devised methods to bypass the infraction limit. Although in different ways each one of the three used fluorescent attributes of certain molecules to highlight structures that could not be made visible previously. Before the contributions of the trio scientists could only analyse materials the size of mammalian cells or bacteria. Today we are able to create detailed pictures of proteins or even single molecules – a true milestone for many disciplines of the natural sciences including cell biology and nanotechnology. Further Reading: Scientific Background: Super-resolved fluorescence microscopy The slider graphic of this article includes photo excerpts from: Argonne National Laboratory @ FlickR (licensed under Creative Commons).