Mario Vargas Llosa: Confessions of...
Back

Peruvian born writer and political activist Mario Vargas Llosa received the Nobel Prize in Literature in the year 2010 ‘for his cartography of structures of power and his trenchant images of the individual’s resistance, revolt, and defeat’. During the 5th Lindau Meeting on Economic Sciences Vargas Llosa held his presentation titled ‘Confessions of a Latin American Liberal’ at Lindau’s City Theatre. With his speech he made an international plea for a resurgence of liberal ideas and policies. His words resonated throughout the world and were printed in several big newspapers. So far Le Monde (France), Haaretz (Israel), Neue Zürcher Zeitung (Switzerland) and Der Tagesspiegel (Germany) have picked up Vargas Llosa’s ‘Confessions’.

The views in the following edited manuscript are those of Mario Vargas Llosa. 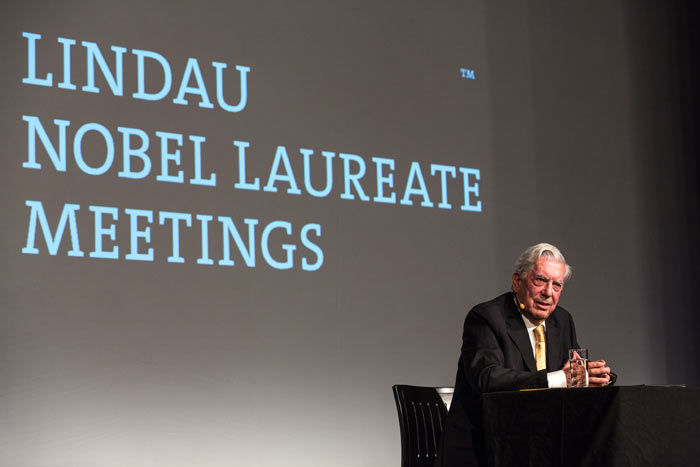 Mario Vargas Llosa was the first literature Nobel Laureate to ever hold a lecture at a Lindau Meeting. Photo: C.Flemming/Lindau Nobel Laureate Meetings.

I am grateful to the Council for the Lindau Nobel Laureate Meetings for inviting me to deliver this lecture because they are considering me not only for my literary work but also for my ideas and political views. In the world in which I move most frequently,  Latin  America,  United  States  and  Europe,  when  individuals  or institutions pay tribute to my novels or literary essays, they typically add an “this does not mean that we accept his criticisms or opinions regarding political issues.” After having grown accustomed to this bifurcation of myself, I am happy to feel reintegrated thanks to this institution, which, rather than subject me to that schizophrenic process, views me as a unified being.

But now, to be honest with you, I feel I should explain my political position. I fear it is not enough to claim that I am a liberal. The term itself raises the first complication. As you well know, “liberal” has different and frequently antagonistic meanings, depending on who says it and where they say it. For example, my  grandmother Carmen used to say that a man was a liberal when referring to a gentleman of dissolute habits. For her, the prototypic incarnation of a “liberal” was a legendary ancestor of mine who told his wife that he was going to buy a newspaper and never returned. The family heard nothing of him until 30 years later, when the fugitive gentleman died in Paris.

In the United States, the term “liberal” has leftist connotations. On the other hand, in Latin America and Spain, where the word was coined to describe the rebels who fought against the Napoleonic occupation, they call me a liberal – or, worse yet, a neo-liberal – to discredit me, because the political perversion of our semantics has transformed the original meaning of the term – a lover of liberty, a person who rises up against oppression – to signify conservative or reactionary.

Liberalism, in Latin America, was a progressive intellectual and political philosophy that, in the XIX century, opposed militarism and dictators, wanted the separation of Church and the State and the establishment of democratic and civilian culture. In most countries liberals were persecuted, exiled, send to prisons or killed by the brutal regimes that, with few exceptions – Chile,  Costa Rica, Uruguay and no more – prospered all over the continent. But in the XX century revolution, not democracy, was the aspiration of the political avant-garde, and this aspiration was shared by a great number of young people who wanted to emulate the guerrilla example of Fidel Castro. In this context, liberals were considered conservatives and  caricaturized  so much that their real  political goals and authentic ideas only permeated small circles. 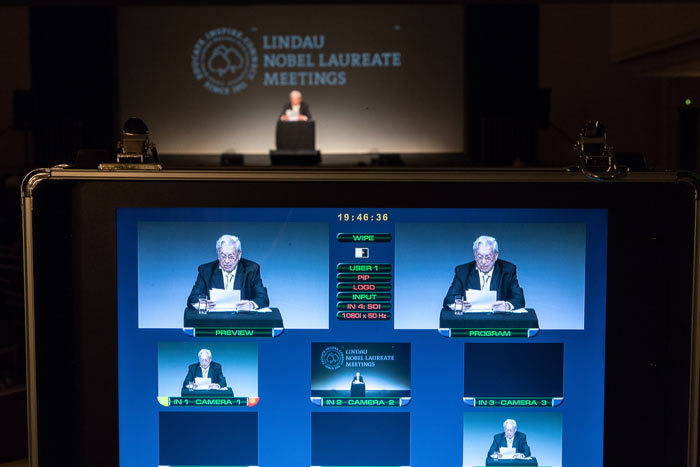 Vargas Llosa’s speech had an Impact that reached well beyond the walls of the Lindau city theatre. Photo: C.Flemming/Lindau Nobel Laureate Meeting.

Only in the last decades of the 20th century things started to change and liberalism came to be recognized as something deeply different from the Marxist left and the extreme right, and it is important to mention that this was possible, at least in the cultural sphere, because of the courageous endeavor of the great Mexican poet and essayist Octavio Paz and the magazines that he published, Plural and Vuelta.  After the fall of the Berlin Wall, the collapse of the Soviet Union and the conversion of China to a capitalist (though authoritarian) country, political ideas also evolved in Latin America and the culture of freedom made important gains all over the continent.

Because liberalism is not an ideology, but rather an open, evolving doctrine that yields to reality instead of trying to force reality to do the yielding, there are diverse tendencies and profound discrepancies among liberals. With regard to religion and social issues, liberals like me, who are agnostics as well as supporters of the separation between church and state and defenders  of the  decriminalization  of abortion,  gay  marriage  and  drugs,  are sometimes harshly criticized by other liberals who have opposite views on these issues. These differences of opinion are healthy and useful because they do not violate the basic precepts of liberalism, which are political democracy, the market economy and the defense of individual interests over those of the State.

For example, there are liberals who believe that economics is the field through which all problems are resolved and that the free market is the panacea for everything from poverty to unemployment, discrimination and social exclusion. These liberals, true living algorithms, have sometimes generated more damage to the cause of freedom than did the Marxists, the first champions of the absurd thesis that the economy is the driving force of history.  It simply  is  not true.

Ideas  and  culture  are what differentiate civilization from barbarism, not the economy. The economy by itself may produce optimal results on paper, but it does not give purpose to the lives of people.

The free market is the best mechanism in existence for producing riches and, if well complemented with other institutions and uses of democratic culture, can launch the material progress of a nation to the spectacular heights with which we are familiar.  But it is also a relentless instrument, which, without the spiritual and intellectual component that culture represents, can reduce life to a ferocious, selfish struggle.

Thus, the liberal I aspire to be considers freedom a core value. The foundations  of liberty  are  private  property and the  rule of law;  this system guarantees the fewest possible forms of injustice, produces the greatest material and cultural progress, most effectively stems violence and provides the greatest respect for human rights. According to this concept of liberalism, freedom is a single, unified concept. Political and economic liberties are as inseparable as the two sides of a medal. Because freedom has not been understood as such in Latin America, the region has had many failed attempts at democratic rule. This was either because the democracies that began emerging after the dictatorships were toppled respected political freedom but rejected economic liberty, which inevitably produced  more  poverty,  inefficiency and  corruption,  or because they led to authoritarian governments convinced that only a firm hand and a repressive regime could guarantee the functioning of the free market. 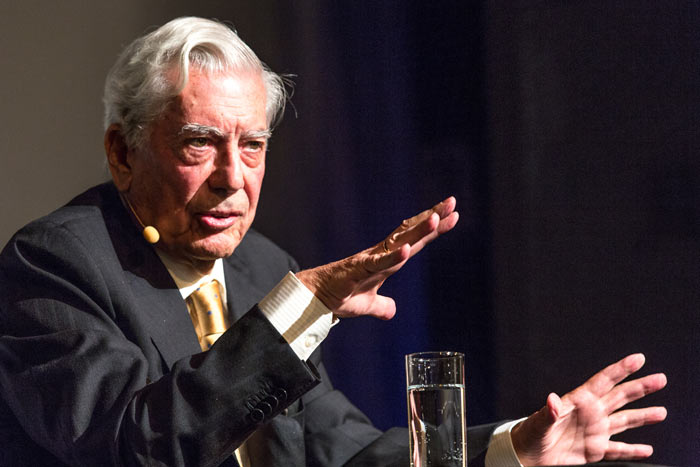 Political  democracy,  freedom  of  the  press  and  the  free  market  are foundations of a liberal position. But, thus formulated, these three expressions have an abstract, algebraic quality that dehumanizes and removes them from the experience of the common people. Liberalism is much, much more than that. Basically, it is tolerance and respect for others, and especially for those who think differently from ourselves, who practice other customs and worship another god or who are non-believers. By agreeing to live with those who are different, human beings took the most extraordinary step on the road to civilization. It was an attitude or willingness that preceded democracy and made it possible, contributing more than any scientific discovery or philosophical system to counter violence and calm the instinct to control and kill in human relations. It is also what awakened that natural lack of trust in power, in all powers, which is something of a second nature to us liberals.

We cannot do without power, except of course in the lovely utopias of the anarchists. But it can be held in check and counterbalanced.

Defending the individual is the natural consequence of believing in freedom because it is measured by the level of autonomy citizens enjoy to organize their lives and work toward their goals without unjust interference, that is, to strive for “negative freedom,” as Isaiah Berlin called it. Collectivism has survived throughout history in those doctrines and ideologies that place the supreme value of an individual on his belonging to a specific group. All of these collectivist doctrines – Nazism, fascism, religious fanaticism and communism and nationalism – are the natural enemies of freedom and the bitter adversaries of liberals. In every age, that atavistic defect has reared its ugly head to threaten civilization.

A great liberal thinker, Ludwig von Mises, was always opposed to the existence of liberal parties because he believed that the liberal philosophy should be a general culture shared with all the political currents and movements co-existing in an open society.  There is a lot of truth to this theory. In recent past, we have seen cases of conservative governments, such as that of Ronald Reagan, Margaret Thatcher and Jose Maria Aznar, which promoted deeply liberal reforms. At the same time, we have seen nominally socialist leaders, such as Tony Blair in the United Kingdom, Ricardo Lagos in Chile, and in our days, Jose Mujica in Uruguay, implement economic and social policies that can only be classified as liberal. 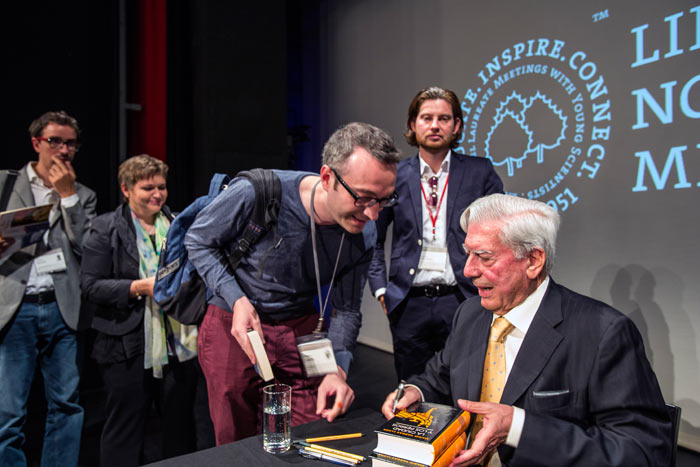 After his presentation Mario Vargas Llosa was happy to sign some books and answered some questions by his listeners. Photo: C.Flemming/Lindau Nobel Laureate Meetings.

Populism more than revolution is today the major obstacle for progress in Latin America. There are many ways to define “populism”; but, probably, the more accurate is the kind of demagogic social and economic policies that sacrifice the future of a country in favor of a transient present. With fiery rhetoric, Argentine President Cristina Fernandez de Kirchner has followed the example of her husband, the late President Nestor Kirchner, with nationalizations, interventionism, controls, persecution of the independent press, policies that have taken to the brink of disintegration a country that is, potentially, one of the more prosperous of the world.

Even the left has been reluctant to renege on the privatization of pensions – which has occurred in eleven Latin American countries to date – whereas the more  backward  left in the  United States opposes the privatization of Social Security.  These are positive signs of a certain modernization of the left, which, without recognizing it, is admitting that the road to economic progress and social justice passes through democracy and the market, which we liberals have long preached into the void.

Mario Vargas Llosa’s much-noticed presentation can also be watched on video at the Lindau Mediatheque.