Managing Innovation: Step-by-step approach rarely...
Back
Paul Hünermund, who was a young scientist at #lindauecon14 explains his research on innovation management. Step by step to innovation success? Being an innovative company is easier said (or included in a mission statement) than done. Managers of innovative companies have to spend large R&D budgets on projects with highly uncertain outcomes. In high-tech industries such as automobiles, biotech and pharma, R&D intensities of more than 15% of annual sales are not uncommon (EU R&D Scoreboard, 2013). How to invest these funds in the most efficient manner, that is, maximising the success rate of the conducted innovation projects, is of great interest to practitioners and academics alike. The organisation and financing of innovation projects in different stages is widely accepted as the preeminent way of managing uncertain opportunities while keeping costs under control. Instead of allocating the necessary financial resources as a whole at the launch of a project, the execution is divided into parts (stages); each of them is concluded by an assessment (gate) whether the predefined goals for that stage (for example, a positive market test or developing a prototype) are met. Only if this is the case, additional funds are allocated to continue the project. In an ideal situation, the follow-up budgets are increasing at every stage. As the success of a project usually becomes more predictable over time, the approach makes the invested funds inversely proportional to the involved uncertainty. 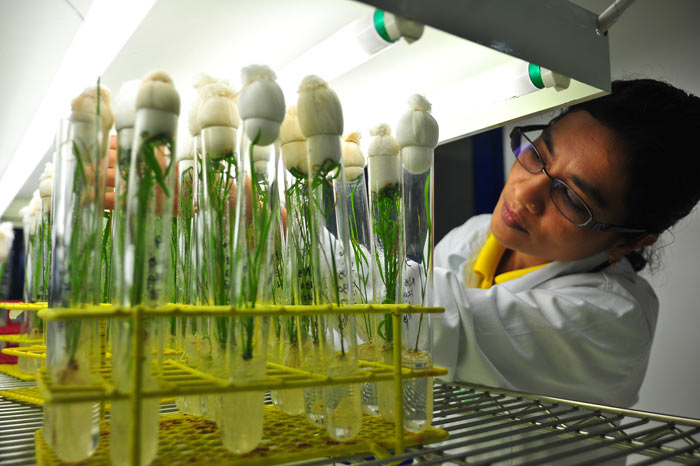 Biotech firms are among the companies most heavily influenced by the potential costs of innovation management. Photo: IRRI Photos @ FlickR (licensed under Creative Commons).

In our paper (Andries and Hünermund, 2014), we are studying the impact of a staged project management on innovative performance, measured as sales from new products, in a representative sample of German firms for the period of 2006 until 2011. Our results suggest that, in general, there is no benefit of allocating R&D budgets in stages. Rather we identify two contingency factors that moderate the impact of this management paradigm: the overall financial capacity of a firm and the radicalness of a firm’s envisaged innovation projects. Only firms that have a modest innovative intent, that is, that do not envisage innovations far away from their current technological base, benefit from a staged project management. If efforts concentrate on innovations that are too radical, the formulation of subgoals and rigid criteria for abandonment becomes impossible. In such an environment, a more experimental approach, where deliverables are flexible and detours are possible, might serve a better purpose. Reaching a dead end in an endeavour does not always call to drop out but can pave the way for radical innovations in subsequent projects that were not thought of before. Sufficiently available financial resources are a second cornerstone for staged project management to be remunerative. Firms with creditworthiness below a median rating show a tendency to exit innovation projects too soon compared to their resource-abundant counterparts. Due to pressure from the cost side, projects are not continued until a point where the chances of success become assessable. Firms with resource slack, however, possess the perseverance to pursue projects until uncertainty resolves sufficiently so that they can make better informed decisions. Although staged project management is a prominent principle in the management literature and many companies apply it to organise their R&D activities, econometric analyses about its merits are largely absent. Besides interesting implications for the theory of real options, our study demonstrates the significant influence of financial resources and the radicalness of innovation projects on the effectiveness of the approach in practice. In situations where an efficient resource allocation would be of major importance, that is, when resources are scarce and when firms aim at radically transform their line of business, staged project management shows no performance premium. It is thus far from being a ‘one size fits it all’ approach and managers should consider carefully their organisational environment and the strategic purpose of their innovation projects. Otherwise, a costly reorganisation of their R&D activities might prove a waste of effort. References: Andries, P. and Hünermund, P. (2014). Staging innovation projects: (When) does it pay off? Mimeo. EU R&D Scoreboard (2013). The 2013 EU Industrial R&D Investment Scoreboard. EUR – Scientific and Technical Research series.   Image used in slider graphic credited to: Boegh @ FlickR (licensed under Creative Commons).

Paul Hünermund, Lindau Alumnus 2014, is working at the Centre for European Economic Research. He was among the young scientists participating in the 5th Lindau Meeting on Economic Sciences.