Is the 2% inflation target a luxury for the West African Economic and Monetary Union (WAEMU)?

The 2% inflation target followed by the WAEMU’s Central Bank (BCEAO), which is one of the lowest and mostly the standard for Advanced Economies, is a luxury for the WAEMU region, one of the poorest in the world. Indeed, the growth costs of WAEMU’s membership outweigh by far its price stability benefit. This is the central finding of research by René Tapsoba (jointly with Zorobabel Bicaba), to be written up in the context of the 2014 Economic Lindau Nobel Laureate Meetings.

The WAEMU is an integration area that regroups eight countries from West Africa. These countries share a common currency, the CFA Franc, issued by the Union’s central bank (BCEAO). The CFA Franc is pegged to the French Franc and to the Euro since the launch of the latter in 1999. The relevance of this peg is at the forefront of the policy debate in the current context of the aftermath of the 50th anniversary of most African countries’ independence. Pegging the CFA Franc to the Euro, hence adopting implicitly the European Central Bank (ECB)’s 2% inflation target, relied on the premise that this would allow importing the credibility of the ECB and ensuring price stability, which is a key precondition for a strong and balanced long-term growth. Besides, this was also expected to help foster trade and attract more foreign direct investment. However, if the evidence so far points to a stronger performance compared to its SSA peers in terms of price stability, the WAEMU appears to be lagging behind on most other key economic fronts (see figure 1), including notably on growth, thus fuelling the debate on the relevance of the monetary policy strategy in this region that has so much need of strong growth performance to pull a significant proportion of its population out of the abyss of extreme poverty. As such, this study, which aims at quantifying formally the growth costs of the disinflation process in the WAEMU, is very timely.

Contribution of the paper…

The main novelty of the paper is that it is the first study to formally quantify the growth cost of the WAEMU’s membership. The existing literature focuses on estimating the optimal level of inflation in the region. Using data from 1980 to 2008, the present research assesses the economic performance of the WAEMU compared to its peers from Sub-Saharan Africa (SSA). The authors find that the growth costs of being a WAEMU’s member outweigh the price stability benefit, pointing to the non-optimality of the inflation target that guides the conduct of monetary policy in the Union.

How the study is conducted?

The study uses sophisticated econometric models (synchronic control matching) to pair the eight WAEMU countries with a group of 20 Sub-Saharan African countries that have broadly similar observable economic and institutional characteristics. With this control group, the authors are able to isolate the causal impact of the monetary policy strategy followed by the WAEMU. They then question the optimality of the Union’s inflation target, building on recently-developed econometric technique (Panel Smooth Transition Models). 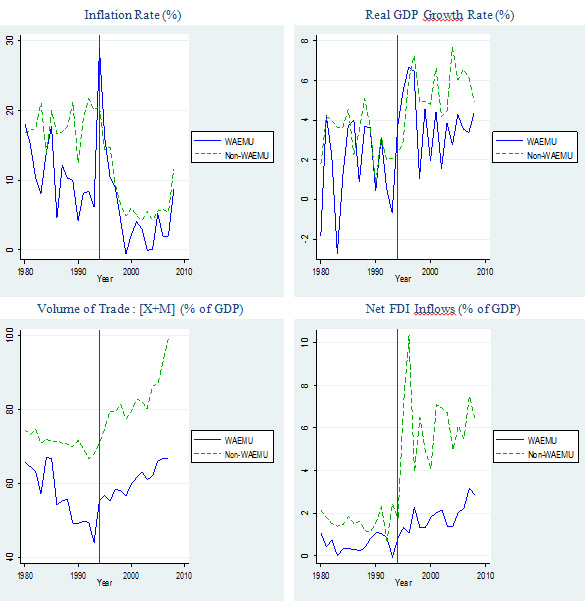 Note for Editors: The views expressed in this paper are those of the authors and do not necessarily represent those of the IMF or IMF policy.