Klaus Tschira
Back
Everybody at the Council and Foundation Lindau Nobel Laureate Meetings mourns this committed, likeable and modest maecenas. 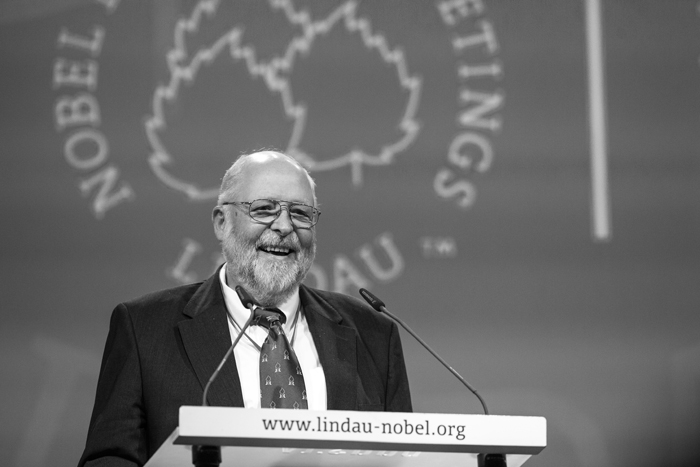 A co-founder of SAP AG in 1972, now Europe’s largest software manufacturer, he became a billionaire. To promote projects in the natural sciences, mathematics and computer science, he founded the Klaus Tschira Foundation twenty years ago, or KTS. The projects range from seminars for Kindergarten teachers to school projects and dissertation prizes. With KTS, he managed to shape the scientific landscape of his home town Heidelberg like no other contemporary. High above Heidelberg, in the “Villa Bosch”, is the foundation’s headquarters. The villa was originally built for Carl Bosch, a Nobel Laureate in Chemistry, by the chemical company BASF. On the same mountainside, but higher, is the new House of Astronomy that Tschira built right next to the Max Planck Institute for Astronomy. It is shaped like a spiral galaxy, and its job is to explain astronomy to the general public. In 2000, astronomers honoured him with an asteroid, 13028 Klaustschira, as a personal thank-you for his long-time support of astronomy in Germany. Also at the Villa Bosch is the Heidelberg Institute of Theoretical Studies (HITS), where high-ranking researchers tackle problems of analysing large quantities of experimental data – from astroinformatics to computational biology. Tschira was fascinated with the stars at an early age – his pals called him “Planetenheini”, something like “Planet Peter”. Born in Freiburg, he studied physics in Karlsruhe and worked for IBM, before founding SAP with his colleagues Hans-Werner Hector, Dietmar Hopp, Hasso Plattner and Claus Wellenreuther. They had plans for standardised software programmes for real-time processing at a time when IBM was mostly interested in selling hardware. Of these famous founding five, Tschira is the first to die. Most important to Tschira was the understandable communication of scientific results to the general public. According to him, understanding of and appreciation for natural sciences and technology are the cornerstones of Germany’s economical prosperity. His “Klartext” award for “achievements in public understanding of science” chose the best articles based on PhD theses. He also founded the National Institute for Science Communication NaWik in Karlsruhe, training scientists and students to communicate with the public. Klaus Tschira attended the Lindau Meetings regularly since 2003. In 2013, he became a member of the Honorary Senate of the  Foundation Lindau Nobel Laureate Meetings. During the opening ceremony 2013 he also presented his new “Heidelberg Laureate Forum” (HLF), where Abel, Fields and Turing Laureates meet the younger generation.  This event was inspired by the Lindau Nobel Laureate Meetings and uses their model to promote exchange among top researchers and bright young scientists in the fields of mathematics and computer sciences. Prior to the first HLF in 2013 an intense exchange of human ressources and know-how between Lindau and Heidelberg took place forming a strong relationship between the two events that even transcends the similarity of the mutual benefactor. Klaus Tschira was a keen supporter of Lindau’s “Mission Education”. Tschira won’t see the completion of the Mathematikon in Heidelberg, a large building complex for the mathematics and computer sciences at Heidelberg University – the grand opening was planned for his 75th birthday in December 2015. And he won’t be there for the opening of the Science Media Center SMC that he supported, following the British example with the same name: making scientific findings more accessible to journalists. In twenty years, Tschira’s foundation has spent more than 200 million Euros on the promotion of science and its communication – it is impossible to name all the projects he financed. Yet Tschira always seemed approachable, friendly and modest. He enjoyed his “own” events, like openings, meetings, conferences etc., but not out of vanity – more because he was able to “get something going” and had the freedom to speak his own mind. He also liked to joke, for instance at the Lindau opening ceremony in 2013 he confessed that he also came to Lindau for the good sausage and the local beer. Klaus Tschira supported the Lindau Nobel Laureate Meetings in many ways: One of the most visible and successfull of the projects facilitated by him is the photo series ‘Nobel Portraits’ by German photographer Peter Badge who aims to shoot a portrait photo of every Nobel Laureate. These intense and often times unconventional black and white portraits have shaped the visual identity of the Lindau Nobel Laureate Meetings for many years and have now also been published as a hardcover in Germany together with Badge’s many anecdotes surrounding his Nobel photo journeys. In addition Klaus Tschira promoted the project ‘Sketches of Science’ located at the seam of science, communication and art. This photo exhibition by Munich science photographer Volker Steger challenges Nobel Laureates to to draw their own research – with crayons! The often times funny and surprising results have already been on display at 11 stops on 3 continents and will continue their travels around the world this year with new stops at Hannover Messe in Germany and Moscow, Russia. Besides these outreach projects, Klaus Tschira also benefited specific Lindau Meetings and the renovation of the Council’s Executive Secretariat’s bureaus in 2008. Klaus Tschira died unexpectedly on Tuesday, 31st of March – far too soon. He is survived by his wife Gerda and two grown sons. He will be deeply missed.