Interparticle Potentials and Supernovae: Windows...
Back

One of the greatest advances in the last century was the understanding that all phenomena in Nature – regardless of their scale – are ruled by four fundamental forces, namely, electromagnetism, weak and strong nuclear forces, and gravitation. A unifying theoretical scheme, the so-called Standard Model (SM), managed to bring the first three forces together, while gravity still resists being incorporated. The SM is a very successful construction and its predictions are in good agreement with experiment, but it still has some problems, and physicists love problems!

Some of the issues not covered by the SM are, for example, the non-zero masses for neutrinos which cause them to oscillate, or the fact that a large amount of the mass and energy in the Universe are actually not known (they were dubbed dark matter and energy). These and other puzzles have led physicists to build alternative theories supplementing the SM, whereby new forces and particles are introduced in the hope of healing some of the known maladies. Even though these beyond the Standard Model (BSM) scenarios usually require very high energies, they may have tangible consequences in our low-energy world. That is where my work in phenomenology starts.

The first part of my PhD was conducted in Rio de Janeiro, Brazil, at the Brazilian Centre for Research in Physics (CBPF), where we studied new forms of interactions between well-known sources, like electrons. In some BSM scenarios new interactions, carried by novel particles, may give rise to modifications in the already known ones, such as electromagnetism or even gravity. Our idea was to try to understand how new BSM forces would be felt, or measured, in case they coupled to low-energetic electrons in various ways while preserving highly desirable symmetry properties.

We have found that, indeed, it is possible to find traces of such novel interactions, specially between (spin-)polarized sources [1]. It would be therefore possible to study the mutual interaction of polarized matter and determine whether the observed behavior matches the expected one based on the SM – this could help putting upper limits on the specific parameters of BSM models. Another interesting consequence would be on the atomic level, where spectral lines, i.e., energy levels, could be shifted.

In a subsequent study we also worked on the energy between sources, but this time we did not focus on the mediating particles, but on the sources themselves: instead of dealing with spin-1/2 sources, like electrons, we treated sources with spin-1 in the low-energy limit. The difference in spin tells us that the two kinds of particles would respond differently to electromagnetic fields, for example. We found that the way these sources interact is not as different as one could have supposed, so that a wide range of similarities could be drawn [2]. This could help better understand the so-called hyper-nuclei, whose excitations may be in spin-1/2 or spin-1 states.

Already in Germany for my Cotutelle period at the University of Heidelberg, we changed the focus to a more phenomenological approach, but still dealing with BSM physics. We turned to the study of axion-like particles, or ALPs for short: hypothetical particles that interact very weakly with the photon, the mediator of the electromagnetic force. Because of this interaction, ALPs might leave tracks in many circumstances, from sub-atomic scales to cosmological ones. In particular, a very interesting possibility is to investigate the impact of ALPs in supernovae. 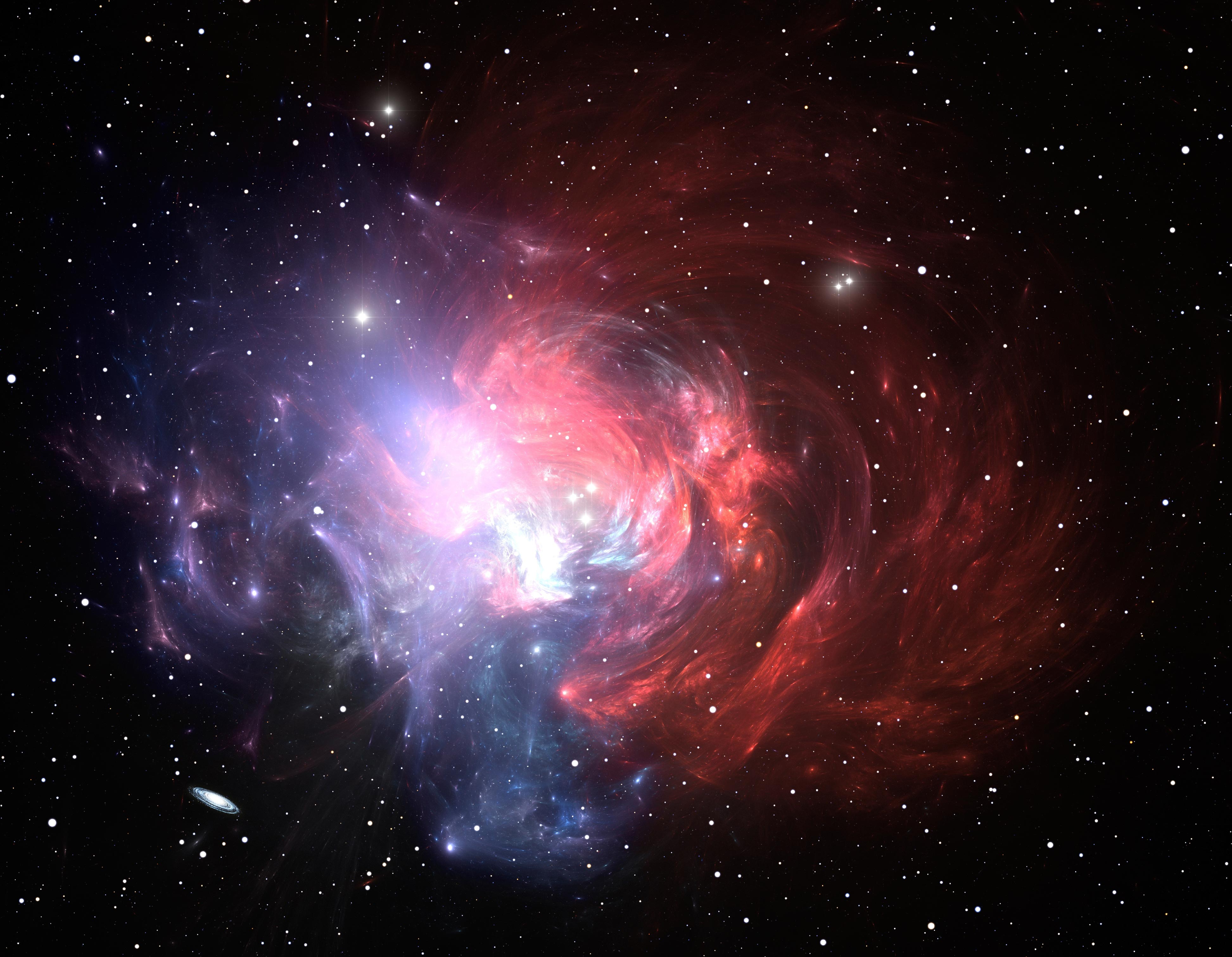 An illustration of a supernova. Photo: iStock.com/Pitris

A supernova is a huge explosion at the final stage of the life of a massive star which releases enormous amounts of energy, possibly shining brighter than an entire galaxy. These extreme events are preceded by equally extreme conditions inside the progenitor star: ultra-high densities and temperatures, whereby matter – electrons, neutrons and protons – get crunched together to form a plasma. In this very hot medium ALPs may be produced and, since they interact only very weakly, scape the interior of the exploding star. After exiting the influence of the supernova the ALPs would fly a certain distance – statistically regulated by its mass and coupling to the photons – and then decay in two very energetic photons, usually in the gamma-ray region.

We would then expect that, as soon as a supernova is observed, an extra amount of ALP-originated radiation would be detected, right? Yes, but unfortunately, for the famous case of SN 1987A – the most notable event of this kind since 1600 – no excess of gamma-rays could be found. This “null” result is actually very useful, as it serves to impose limits on the physical properties of ALPs, therefore helping to exclude values incompatible with observations. Our work focused on very massive ALPs in the context of SN 1987A as well as Betelgeuse, a red supergiant which is expected to go supernova in the next thousand years [3].

Besides my aforementioned PhD themes, I am currently interested in learning more about Lorentz violation and its phenomenological consequences. Lorentz symmetry is a corner stone of the theory of relativity and is a fundamental pillar of the SM. Possible deviations from it could have very interesting effects, such as variations in the speed of light or even induce changes in properties of elementary particles, such as the magnetic or electric dipole moment of the electron. This is a vast research field and learning more on this subject is being a very interesting challenge [4,5].

Pedro C. Malta, Lindau Alumnus 2016, was born in Rio de Janeiro, Brazil, where he obtained his bachelor (Ba) and master (MSc) in physics at the Federal University of Rio de Janeiro (UFRJ). He completed his PhD in a cotutelle scheme – a double doctorate programme – between the Brazilian Centre for Research in Physics (CBPF, Rio de Janeiro, Brazil) and the Institute for Theoretical Physics (U. Heidelberg, Germany).