How to design a Banking...
Back
#LindauEcon14 participant Marius Zoican explains the difficulties of creating an EBU architecture and offers a possible solution derived from his research. The global financial crisis ignited the debate around a common European bank regulator – a banking union for the Eurozone. One of its major pillars is the single resolution mechanism (SRM): The banking union, rather than the national authorities, decides whether to bail out an insolvent bank. Such a mechanism has undeniable benefits. If a multinational bank defaults, a centralized decision bypasses protracted negotiations between national authorities (see the Dexia, Fortis bailouts). Most importantly, the banking union is in the unique position to limit the spread of losses across European banks. 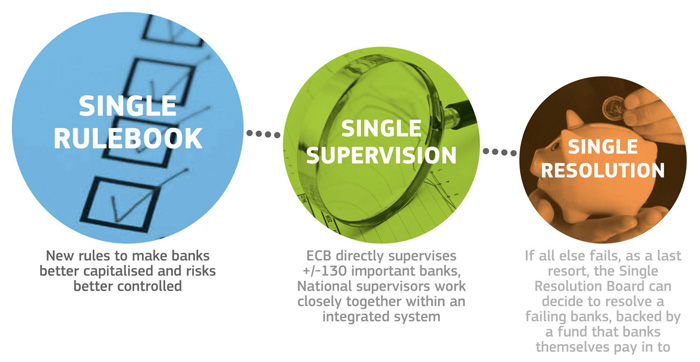 A systemically safer Eurozone Cross-exposures of Eurozone banks are highly asymmetric: Banks in Germany, France, and the Netherlands have net loans of almost one trillion dollars to counterparts in Greece, Italy, Ireland, Portugal, or Spain. National authorities face a natural tension between domestic taxpayers and foreign creditors. If a highly indebted bank becomes insolvent, taxpayer money is needed to bail it out. A large part of the funds, however, is claimed by foreign institutions. Domestic authorities are understandably biased towards domestic taxpayers. They are more likely to impose losses on international creditors through the liquidation of a heavily indebted bank. On the other hand, a banking union represents the interests of both “domestic” and “foreign” actors. To avoid contagion, it is more likely to be lenient with systemic international banks. Systemic contagion risks are contained and welfare improves. ‘Contagion insurance’ premium for the Eurozone core Since banks in larger countries have more consistent international exposures, they benefit most from lower contagion risk. A banking union offers them a form of systemic risk insurance. Consequently, the contributions of Eurozone core countries to the common resolution fund should include a premium. Banks in Germany, France, or the Netherlands will be able to invest in growing European markets while bearing a smaller contagion risk than under the existing mechanism. 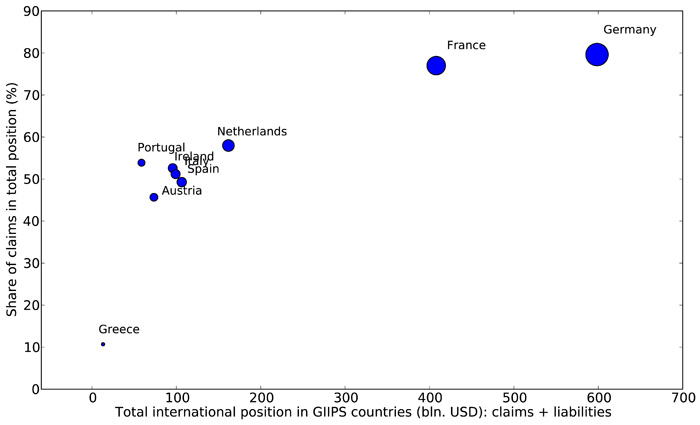 This figure presents net and gross average international balances of banks from selected countries against GIIPS (Greece, Ireland, Italy, Portugal and Spain) countries, between 2008:Q1 and 2013:Q1. The size of the marker is proportional to the total position. Source: Bank for International Settlements, own calculations.

‘Too-European-to-fail’ problem While a lenient banking union minimizes contagion, it can also engender risky behavior at the bank level. Internationally indebted banks might become “too-European-to-fail”: their systemic status is reemphasized. A lesson from the past crisis is that systemic banks are able to take on increasing amounts of risk while relying on implicit regulatory support. Is “too-European-to-fail” a major concern? I argue so: Modern banks hold large positions in opaque and complex assets, such as structured products and derivatives. For these asset classes, a marginal drop in risk management standards can have a very large negative impact on the returns and solvability of the bank. Alternative design solution A hybrid regulatory architecture solves the bank’s incentive problem. The banking union and the national regulators coexist. The banking union’s mandate, however, is limited to European-wide crises, e.g., triggered by an external shock such as the United States’ house market crash. National crises are dealt with by national authorities who bear the full costs of insolvent bank interventions. Contagion risks are contained when it matters most, but internationally systemic banks sometimes face a tougher stance from national regulators. It can prove to be the best of both worlds. The full paper on this topic authored by Marius Zoican and Lucyna Górnicka can be downloaded here. The Image used in the slider graphic is credited to the user orkomedix at FLickR and licensed under Creative Commons.

Marius A. Zoican, Lindau Alumnus 2014, is a PhD candidate at the Tinbergen Institute and VU University in Amsterdam. He studies the impact of financial market design on liquidity, systemic risk, and intermediation quality. His research on exchange design won the 2014 Eastern Finance Association “outstanding paper” award in Pittsburgh.