The History of the Lindau Nobel Laureate Meetings

Since their foundation in 1951, the Lindau Nobel Laureate Meetings have developed into a unique international forum for scientific debate and exchange between Nobel Laureates and young scientists.

A Diverse, International Community Across Generations

As the COVID-19 pandemic has shown, international collaboration among scientists is critical. But that’s nothing new. The Lindau Nobel Laureate Meeting has been bringing together scientists from around the world since 1951. Connecting a diverse, international community across generations with the aim of identifying solutions to the most demanding problems of our time. Providing the impetus to connect science and society throughout the 70-year history. Back then, in the fallout of World War II, the idea of scientists working together was not taken for granted – indeed, many feared the exact opposite.

Two physicians from Lindau had the idea of bringing together scientists and Nobel Laureates from all over Europe. They aimed to bring an end to Germany’s scientific isolation. Franz Karl Hein and Gustav Wilhelm Parade asked for support by Count Lennart Bernadotte from Mainau Island, a member of the Swedish royal family, who was enthusiastic about their idea and contributed valuable contacts. His grandfather had awarded the first Nobel Prizes to the Laureates in 1901. The meeting was conceived as a way of reconnecting scientists and beginning new dialogues. 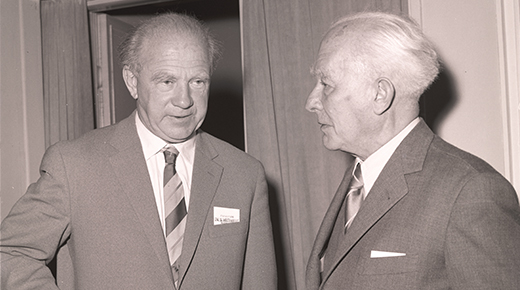 “Max Born came back after the war and he is here in Lindau together with his old student, Werner Heisenberg, who stayed here and who tried to develop a German atomic bomb. And they are talking peacefully with each other.”
Anders Bárány, Former Deputy Director of the Nobel Prize Museum

1953: Origin of the Lindau Core –
Nobel Laureates and Young Scientists

“And then this brilliant idea [from Count Lennart Bernadotte] came up: we should invite young people, students, young researchers.” Anders Bárány 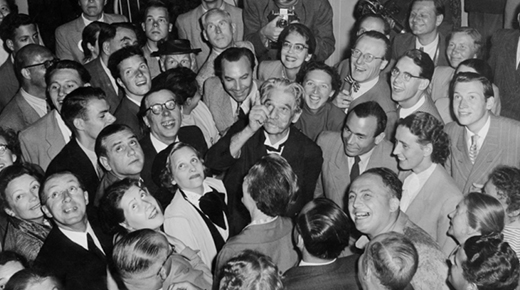 Laureates, primarily with a background in nuclear research, gathered to adopt the Mainau Manifest, denouncing the development and use of atomic weapons. The name of the declaration refers to Mainau, because the last day of the meeting traditionally takes place on the home island of the Bernadotte family.

Right from the beginning, the Meeting would alternate every year between physics, chemistry and physiology/medicine – as noted by Sir William Lawrence Bragg (Physics, 1915), 1968 in Lindau: “The young people who are working in my physics laboratory, two of them shared the Nobel Prize in Chemistry and two of them shared the Nobel Prize for Medicine. There is, therefore, Count Bernadotte, no reason, why you should not invite me every year – that is, of course, if you like to do so.”

Since 1959, the meetings have become increasingly international, going beyond Europe. The German Academic Exchange Service began to support the Lindau Nobel Laureate Meetings in 1971.

1972: Environmental Protection as a Political Issue

German Chancellor and Nobel Peace Laureate Willy Brandt held a lecture titled “Environmental Protection as an International Task.” One year before, Count Lennart Bernadotte had put environmental protection at the heart of the meeting. 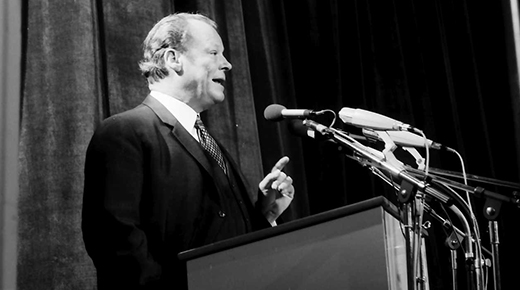 Since 1980 the Alexander von Humboldt Foundation has worked with the meetings. Today, there are about 200 academic partners worldwide who nominate ‘best talents’ from their countries or organisations for the selection process.

The 1980s saw the Lindau Nobel Laureate Meetings’ ties to Stockholm strengthen as the secretary of the Nobel Committee for Physics, Prof. Bengt Nagel (1982) and the executive director of the Nobel Foundation, Baron Stig Ramel (1983), visited Lindau. Today, it is a bond based on trust and friendship, reflected in cooperative projects like the Sketches of Science exhibition. The President of the Council visits the Nobel Foundation in Sweden regularly, and the Council has even been invited to convene in Stockholm. And there has always been a close relationship between the Lindau Nobel Laureate Meetings and the Swedish crown. 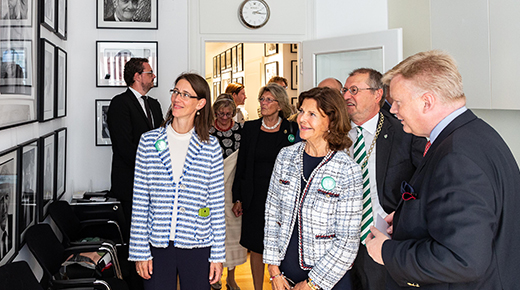 Queen Silvia of Sweden visiting the office of the Council of the Lindau Nobel Laureate Meetings.

The new millennium brought several landmark events: the first interdisciplinary meeting was held and the Foundation Lindau Nobel Laureate Meetings was established by 50 Nobel Laureates, in honour of Count Lennart. Following Wolfgang Schürer, since 2016 Jürgen Kluge serves as the chairman of the board of the Foundation.

In 2007, the permanent executive office was expanded, allowing for Lindau’s work to continue year-round. Activities today range from the Lindau Science Trail, also aimed at young researchers, the Lindau Mediatheque, with free online educational materials, the Lindau Alumni Network, the platform Mentoring Hub, and the Lindau exhibitions, including the Nobel Portraits and the Sketches of Science. The financial support of the Foundation allowed the meetings to continue to develop their main theme and leave a lasting impact well beyond one week a year, e. g. through the development of international relationships and the continued development of collaborative projects.

A new agreement at Mainau: 76 Nobel Laureates signed another Mainau Declaration – initiated by Brian P. Schmidt – to warn world leaders of the urgency of climate change. It was presented to policy makers in advance of the United Nations COP21, the conference that led to the Paris Agreement. 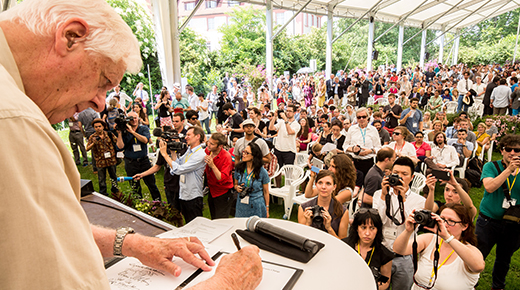 The Inselhalle was completely renovated from 2015 to host meetings and events in Lindau. And in 2018, it was here that Nobel Laureate Elizabeth H. Blackburn initiated the Lindau Guidelines for open, cooperative science in the 21st century.

And then COVID-19 happened. For the first time in the history of the Lindau Meetings, a gathering was postponed, Nobel Laureates and young scientists did not meet personally in Lindau but came together virtually for the Online Science Days 2020. New concepts and interactive formats provided the platform for students and Laureates to continue to enjoy connecting – during extraordinary times.

In the age of global challenges, the mission of the Lindau Nobel Laureate Meetings lives on. Educating, inspiring, and connecting is more important and relevant than ever. 70 years ago, the founders had a dream – and that dream endures in the scientists and Nobel Laureates of the future. 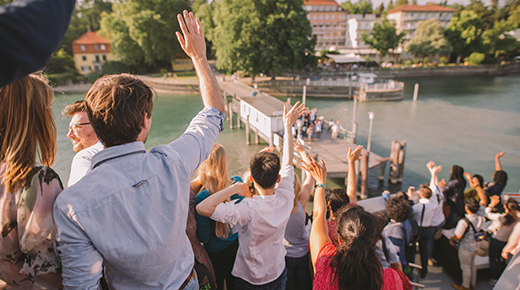 Farewell boat trip to Mainau Island on the last day of the Lindau Meeting.