George Smoot: The explorer of...
Back
George Smoot from MIT to “The Big Bang Theory” This year, physics Nobel Laureate George Fitzgerald Smoot will once again be a guest in Lindau, where he will meet the people he wants to pass the baton on to: the up-and-coming scientists. “I want to encourage the next generation and hand over a science enterprise to my successors, which is good or better than the excellent one I came into as a young scientist.” 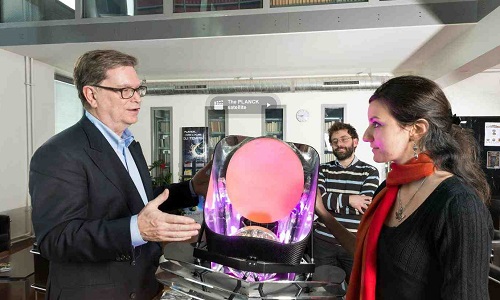 Anyone who takes a virtual tour of his laboratory at the University of Paris is sure to be persuaded that Smoot is doing just that. Young, highly motivated researchers work in a very inspiring atmosphere: workshop, laboratory, computers and chalkboards covered with formulas – and peeping out from behind a desk overloaded with a mountain of papers, modestly, but astutely – the boss. Smoot came from an extraordinarily education-friendly home, into which he was born on 20th February 1945, in Yukon, Florida. His mother was a teacher and his father a hydrologist. Not only did his parents invest in their own education in difficult circumstances, but the young Smoot also received the best support possible. Anything that he was not taught at high school, his parents taught him at home. He also enjoyed an idyllic childhood in Alaska, where the family once moved for his father’s work. In his biographical notes, George Smoot describes his father’s work life in such a way that one is left with no option other than to draw parallels between father and son. Not only did his father collect data, but he also invented numerous devices and techniques in order to optimise his work. He was so successful that, later in life, his skills were in demand worldwide. During the family’s time in Alaska, Smoot’s father would go out hunting moose and bears to feed his family. This led Smoot “junior” to the following conclusion: “The role model he provided and message he sent was: go anywhere and do anything necessary to get the data or the meat for the meals.” And that’s exactly what the son did. At MIT, Smoot received a bachelor’s degree in mathematics and physics and wrote his doctoral dissertation on the decay of subatomic elementary particles. He then moved into the field of cosmology, gaining the chance to work at Berkeley as part of a group led by the Nobel laureate Luis Alvarez, on a project funded by NASA. “Our goal was to design an experiment to find evidence of the Big Bang, which had become scientists’ favoured explanation for the formation of the universe.“ Seen as a relic of the Big Bang and the only tangible evidence for it, this research brought Smoot back to the topic of cosmic background radiation, time and time again. 2014 sees the 50th anniversary of the discovery of this phenomenon – a happy accidental discovery that two astronomers made in the course of their research – which ended up earning them a Nobel Prize. It was May 1964 when Arno Penzias and Robert Wilson first noticed a faint signal coming from every direction in the sky. The photons captured originated from about 380,000 years after the Big Bang and had been racing through space ever since then. In 1974 Smoot and John C. Mather joined NASA’s COBE project. A clear indication of the level of perseverance scientists in that field need can be seen by the length of time it took for the mission to come to fruition: it was not until 1989 that the COBE (Cosmic Background Explorer) satellite was ready to launch. Smoot and his team conducted measurements that were able to prove the theory of so-called anisotropy, demonstrating that background radiation is not homogeneous. Its temperature varies spatially by around 0.01 per mille. The anisotropies provide important information on the evolution of the universe, because the hot and cold spots reflect variations in the density of the gas at the time when the photons began their journey. It is believed that gravity increased these fluctuations, causing denser regions to form, which, eventually, would become galaxies and clusters of galaxies. It was for this discovery that, in 2006, Smoot received his half of the Nobel Prize. The other half went to John Mather for his providing proof of the black-body form of background radiation. 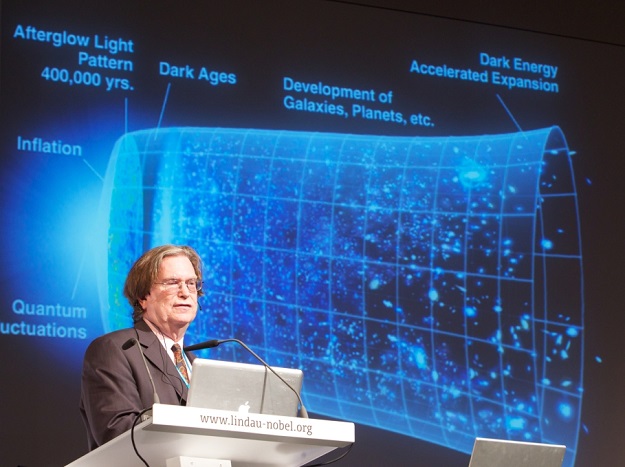 As determined and persistent Smoot may have been while pursuing his scientific objectives, he is also known for having a good sense of humour. He enjoyed a good nerd joke when he was a student and evidently still appreciates that sort of thing. Fans of the television series The Big Bang Theory will remember Smoot’s guest appearance, during which he is referred to by Sheldon Cooper as “Diva”. If there is one thing Smoot is not, then it is a diva. We wish the grounded and yet so far-sighted honouree the very the best of birthday wishes!