Faces – Young Scientist Profile:...
Back
This new issue of „Faces“ would be named more properly if it was called „Beards“. It highlights Australian young scientist Michael Bergin. 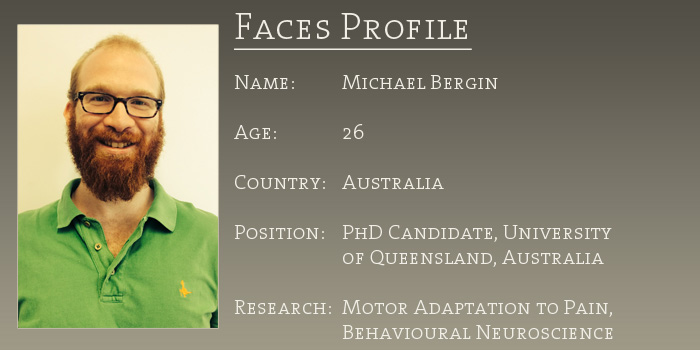 About Faces: „Faces“ is a new series on the Lindau Blog. It highlights the remarkable young scientists who participate in the Lindau Nobel Laureate Meetings and shares their stories and thoughts.   On his research interests:

“Complex and adaptable movement allows us to interact with the world. However, this ability is limited for millions of people around the world due to pain and musculoskeletal conditions. My PhD research investigates the effect of pain on human motor control; specifically, whether the nervous system alters motor variability during acute pain to search for a new, less painful movement strategy.”

On the challenges of a scientist’s life:

“I have been very fortunate in my career thus far.  My family and friends have always been very encouraging of my aspirations to be a scientist.  They understand that a career in science requires long-term commitment and long hours, and so understand when I sometimes can’t attend family events or social occasions because I’m working in the lab late at night or over the weekend.”

“The opportunities and support afforded to me during high school, as an undergraduate student and now as a PhD Candidate have been outstanding. However, for a short time in high school this support and encouragement were left wanting. At the school I attended, everyone who wants to study physics, chemistry, or biology in the final two years of school (i.e. years 11 and 12) is required to sit a standardised examination. The examination is used to quantify scientific literacy and thus used as a proxy to determine whether students will be able to cope with the study of science in years 11 and 12. I desperately wanted to study physics because I found it fascinating, but also because it was important for the undergraduate degree I hoped to study at university. After the examination, the Head of the Science department told my parents that, based on my examination results, he didn’t believe I would cope with senior physics and recommended I choose another subject. Despite this recommendation, my parents encouraged me to enrol in physics – which I did – and then proceeded to excel in the subject. I enjoy telling this story to younger students, as a reminder to follow their aspirations and to never let someone say they’re not good enough or don’t have the capacity to realise their dreams. In a small and certainly less spectacular way it reminds me of Sir John Gurdon’s (Nobel Prize for Physiology or Medicine, 2012) feedback from a teacher: “I believe he has ideas about becoming a Scientist; on his present showing this is quite ridiculous…and it would be sheer waste of time, both on his part, and of those who have to teach him.”

On his road to Lindau:

“I first heard of the Lindau Meetings at the start of my PhD (February 2011) when the Australian delegates to the 61st Meeting dedicated to Physiology or Medicine were announced. I visited the Lindau Meeting website, read about the meeting and its history, and watched several videos on the Mediatheque. Since then I had an unwavering desire to participate in 2014. Like all delegates to Lindau, my application was subject to a multi-stage selection process. I was first successful in gaining support from my Institution (i.e. The University of Queensland), who then submitted my application to the Australian Academy of Science. The Academy’s National Committees for Medicine and Public Health, Biomedical Science, and Cellular and Developmental Biology then undertook a preliminary assessment and ranking of the applications, and the final selection made by a committee of Academy Council members. I was then fortunate enough to gain the final support of the Lindau Council to attend the meeting.”

On his expectations on the Lindau Nobel Laureate Meeting:

“It is especially exciting that Australia will host the International Day at this year’s meeting, particularly given 2014 marks the 60th anniversary of the Australian Academy of Science. There are a number of planned events, with several surprises that will be unveiled on the day! A highlight will be the presentation from an exceptional young Australian researcher, Professor Emma Johnston (@DrEmmaLJohnston), not to mention drinks for the International Get-Together having been hand-picked by an Australian Nobel Laureate. Finally, I’m excited about the unrivalled, once in a lifetime opportunity to network with a diverse group of young scientists who have the potential to make an enormous impact on the world.”

On which Nobel Laureates he is especially looking forward to meet:

“Professor Bert Sakmann because I very much look forward to his presentation, ‘Cortical Circuit and Decision Making’, which is particularly relevant to my own area of research, Professor Elizabeth Blackburn because she completed her BSc and MSc in Australia, before going to Cambridge for her PhD, and postdoctoral work in the United States. I hope to follow a similar career path, so it will be a great opportunity to discuss my plans and gain insight into her experiences as a young Australian scientist abroad. Last but not least I’d also like to meet Professor Steven Chu because I’m interested to discuss how his career progressed from being a physicist at the University of California, Berkeley, and Bell Laboratories, to then drive high-level public policy as Secretary of Energy in President Obama’s Cabinet.”

“As an undergraduate student, I would grow a ‘wisdom beard’ at the end of each semester during the examination period. And so, at the start of December 2013 I decided to reinstate the tradition and grow a ‘wisdom beard’ that I would then shave (with the assistance of several other PhD Candidates in my department) after I submit my PhD thesis on the 31st July 2014.” 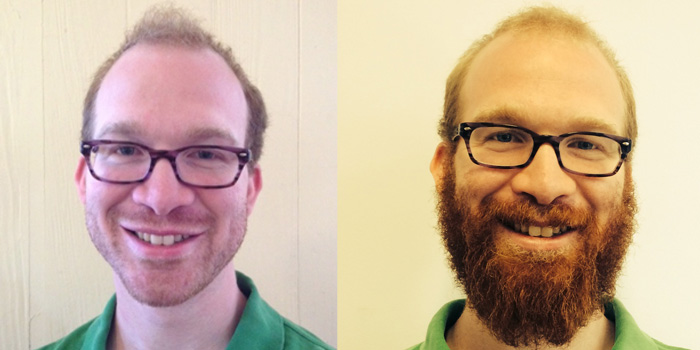