For Bernard Oyayo science is the ‘game changer’. Get to know him on Faces.

In Faces we portray the young scientists of the Lindau Nobel Laureate Meetings and give them an open forum to talk about their research and everything else that is important to them. Everybody should feel encouraged to also share their own thoughts and stories. 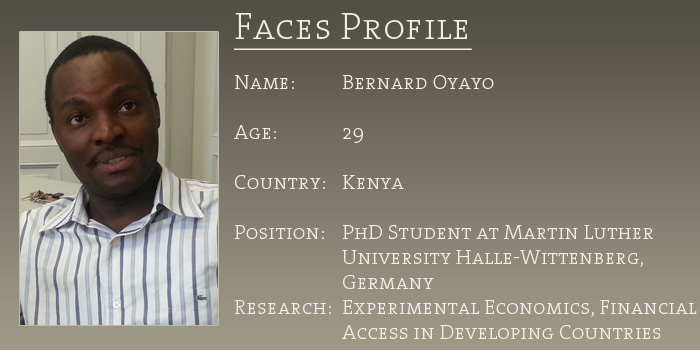 On his research interests:

“I seek, in my current research, to contribute to the debate on ‘social mission vs sustainability of microfinance institutions’. The social mission of the institutions is to lift their clients out of poverty by providing reliable access to finance. Independence from donor funding is necessary for sustainability of the mission. An alternative to donor funding is to generate profits from their operations, which may demand that they charge market rates for their financial services. I, therefore, examine the ability to pay for finance. I do this by investigating financially constrained households consumption and production decisions within the context of the ‘non separability’ concept in economic theory. Since the approach involves extracting policy relevant statistics, a properly controlled experiment would yield the most accurate results. For cost, external validity, and ethical reasons, such experiments are not always applicable in social sciences. Quasi-experimental procedures which mimic such experiments have instead received wide application.”

On the challenges of an economist’s life:

“The biggest challenge I face as an economist is that the subject itself violates some of its theories. Being a student for a third degree in economics, two for which I have had to stay away from my home country, I can now conclude that studying economics violates the principle of diminishing marginal utility.”

What makes a good economist? (Watch the video)

“The current global challenges such as climate change and inequality are complex and crafting their solutions demands an interdisciplinary approach. Part of our contribution, as economists, should be making ourselves understandable to the environmentalists, sociologists, and experts in other disciplines. This requires reading widely and wildly.“

On his road to Lindau and his expectations:

“When I received an email from DAAD informing me of my nomination for the meeting, I was delighted. This was, however, short-lived for the selection part of the process, which seemed even more challenging, still lay ahead of me. The probability of success was infinitesimal given the huge number of applications that were expected. It came to pass and now I am on my way to Lindau. This being my first live interaction with Nobel Laureates, I cannot hide my joy. Specifically, I am looking forward to the lectures by Joseph Stiglitz, Eric Maskin and Daniel McFadden. Additionally, I expect to take the opportunity to network with other young economists from all over the world.”

“Every occupier of this planet is obliged to contribute towards making it more habitable for the current and future generations. We need to change the game if we are to realise different results. My continued participation in science is motivated by the fact that it is the game changer.”

To join the debates and reach out to other participants use the Twitter Hashtag: #LindauEcon14.