In this new episode of Faces we introduce young economist Anna Chorniy.

In Faces we portray the young scientists of the Lindau Nobel Laureate Meetings and give them an open forum to talk about their research and everything else that is important to them. Everybody should feel encouraged to also share their own thoughts and stories. 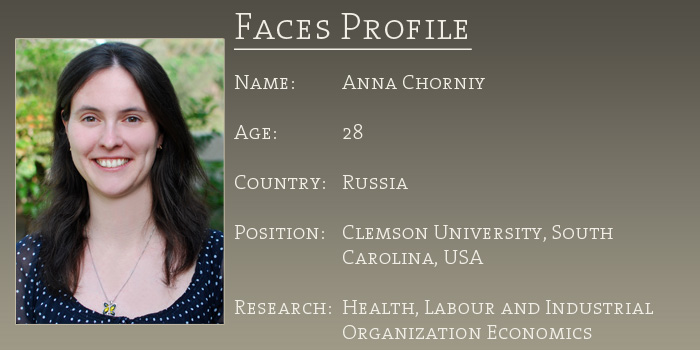 On her research interests:

“Almost 10% of children aged 4-17 had been diagnosed with attention-deficit/hyperactivity disorder (ADHD) in the U.S. in 2007. While over a half of these children receive medications, little is known about the costs and benefits of medical treatment in terms of health, social, behavioral, and educational outcomes. Using U.S. Medicaid claims data for 2003-2012, I model dynamic treatment decisions for children with ADHD and subsequent adverse health and social outcomes (e.g. teen pregnancy). I use the estimates to simulate the cost under various treatment sequences, including the cost of poor adherence and late diagnosis. In a companion paper, with Leah Kitashima we extend my research to investigate the effects of various ADHD treatments on educational outcomes and compare the cost of treatment to its benefits.”

On the challenges of an economist’s life:

“I have to admit, I am a very lucky person and I can’t complain about life beating me up. So far, everything I put work into paid off. One obstacle, or rather regret is that the decision to do academic research in economics resulted in living far away from my home. I received my B.S. and M.S. degrees from Moscow State University in Russia. However, at this point there are more resources and opportunities for research work in the U.S. than in Russia. I hope it will change one day and it is getting better, I think, despite of a constant political turmoil.”

On her road to Lindau:

“I would be very embarrassed if I were to tell anybody how nervous I was at every stage of the process… After I was nominated by my Department and then by the University, I realized that it is happening and it is real. I was checking my application status online nearly every… well, often. For my success, I am particularly grateful to my advisors at Clemson University: professors Tom Mroz, Dan Miller, and Michael Maloney.”

On her expectations on the Lindau Meeting on Economic Sciences:

“It wouldn’t be an exaggeration to say that I am as excited to meet attending Laureates as young economists from all over the world. One of us might be a future Laureate as well!”

To join the discussions and reach out to other participants use the Twitter Hashtag: #LindauEcon14.