Attention, it’s a world premier! Today, the first ever Double Helix Special Edition of “Faces” features not only one but two Young Scientists: Meet Adam & David Tarnoki from Hungary. 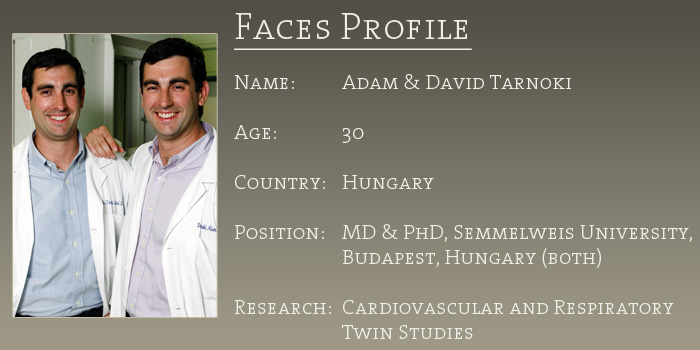 About Faces: „Faces“ is a new series on the Lindau Blog. It highlights the remarkable young scientists who participate in the Lindau Nobel Laureate Meetings and shares their stories and thoughts.

On their research interests:

“As being an identical twin pair, we led numerous multidisciplinary twin study research projects, because twin study is considered a key tool in behavioural genetics and in content fields, from biology to psychology since it provides an excellent opportunity to investigate the genetic influence on different variables and help to better understand the genetic interplay between different traits and the effect on epigenetic influence. If a phenotype/disease proves to be highly heritable, people should be aware of the transfamiliar heredity and early screening. In contrast, if environmental factors determinate mainly a trait, people should be aware of the importance of lifestyle in prevention.”

On the challenges of a scientist’s life:

“Fortunately, we had no obstacles to overcome. In contrast, it was easier to involve twins to our study as being an identical twin pair. The only obstacle is that we are sometimes mixed up by our patients and colleagues creating confusion in our workplace since we look alike.”

On their road to Lindau:

“Our tutor, who is a member of the Hungarian Academy of Sciences nominated us, but she requested that either both or neither of us should be accepted, because we supplement each other”

On their expectations on the Lindau Nobel Laureate Meeting:

“We look forward to both meeting Professors Arber and Blackburn due to their work on DNA methylation and telomerase enzymes and networking as well.”

Adam and David Tarnoki will participate in the 64th Lindau Nobel Laureate Meeting.