Exploring the Connections Between Sports...
Back

When reading the biography of Nobel Laureate Kurt Wüthrich, it quickly becomes clear that he embodies the concept of a Renaissance man. Not only did he excel in academic work, winning the 2002 Nobel Prize in Chemistry for his advancement of nuclear magnetic resonance spectroscopy, but Wüthrich was also an avid sportsman.

As a young man attending the University of Basel, he worked towards degrees in both chemistry and sports — the latter requiring about 25 hours per week of intense physical exercise, as well as courses in human anatomy and physiology. Even though he chose science in the end, sports continued to play an important role in Wüthrich’s life. He enjoyed skiing, fishing, and even played in a competitive soccer league well beyond the age of 50. 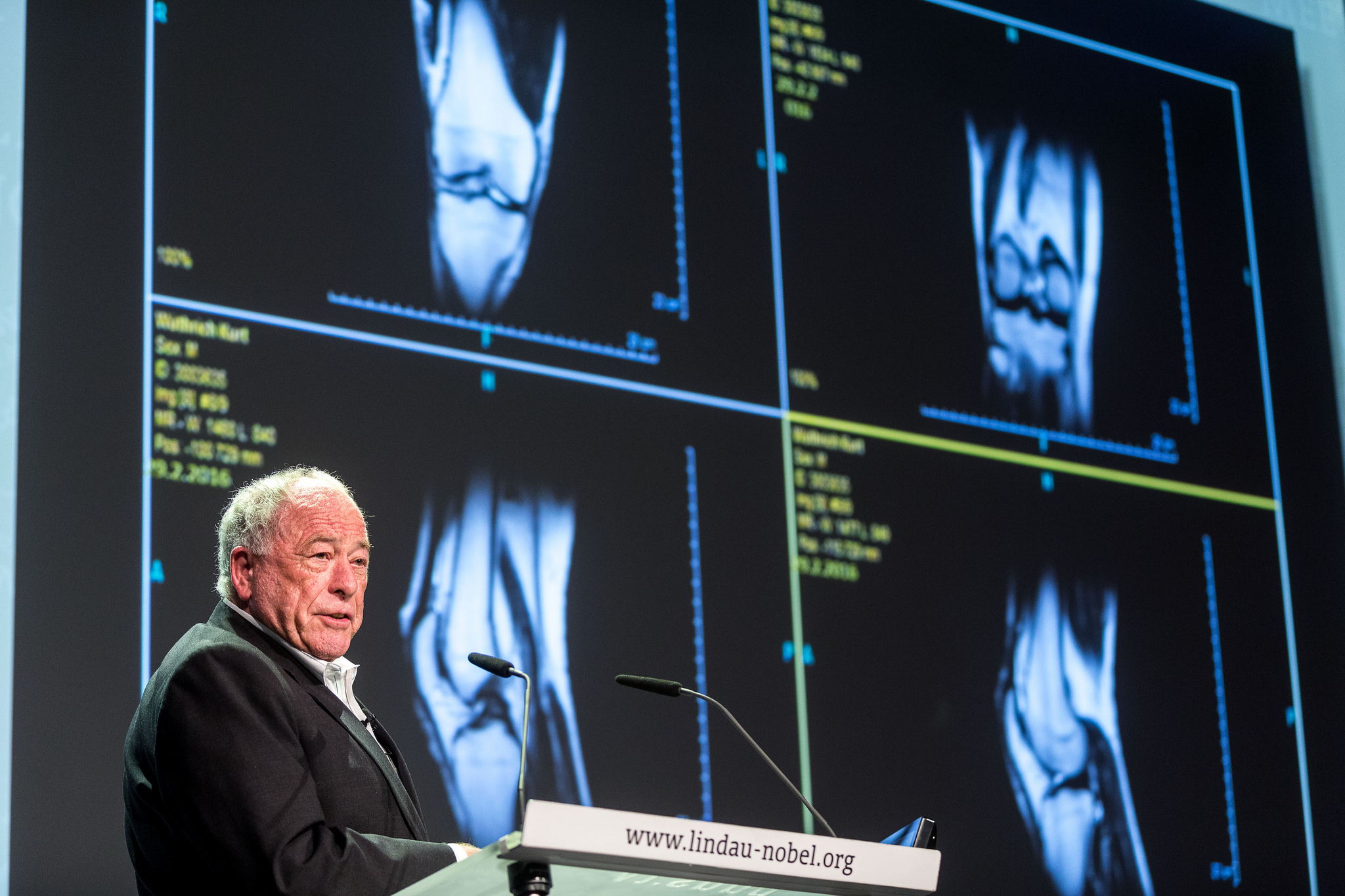 Given his interdisciplinary background, it came as no surprise that much of his master class at the 66th Lindau Nobel Laureate Meeting focused on the science of sports. In fact, two young scientists who gave talks at the master class — Dominique Gisin and Bettina Heim — have been blessed with a similar combination of both mental and physical talents as Wüthrich himself.

Dominique Gisin, currently a Bachelor’s student in physics at ETH Zürich in Switzerland, spoke about the mechanics of alpine skiing and its impact on the human body. Gisin started her degree at the University of Basel but interrupted coursework to concentrate on skiing, making her Alpine Ski World Cup debut in 2005. Four years later, she got her first World Cup victory in women’s downhill skiing, and at the 2014 Sochi Winter Olympics, nabbed a gold medal in the same event.

To start off her talk, she played a series of video clips depicting the many crashes and falls she has suffered throughout her storied career, as the audience winced. In an average year, about 35% of all alpine athletes are injured — Gisin herself has gone through knee surgery a whopping nine times as a result of injuries.

In terms of physics, the variables that matter when it comes to modeling the dynamics of a downhill skier are numerous: the mass of the athlete, her velocity, the radius of a turn, snow temperature, air temperature, course condition, the mechanical characteristics of the equipment, visibility, and the mental/physical state of the athlete. These factors need to be considered when thinking about how to lower the rate of injury for the sport.

For instance, a tighter course setting would help reduce the athlete’s velocity, which could make crashes and falls less dangerous. But as Gisin notes, such a change would also cause skiers to move closer to the nets and potentially get tangled up in them. Another idea that might be interesting to pursue is uniform “anti-aerodynamic” racing suits that reduce athletes’ velocity and provide increased protection. Also, as seen in other sports, alpine skiing could benefit from the development of better protection equipment such as helmets and back protectors. 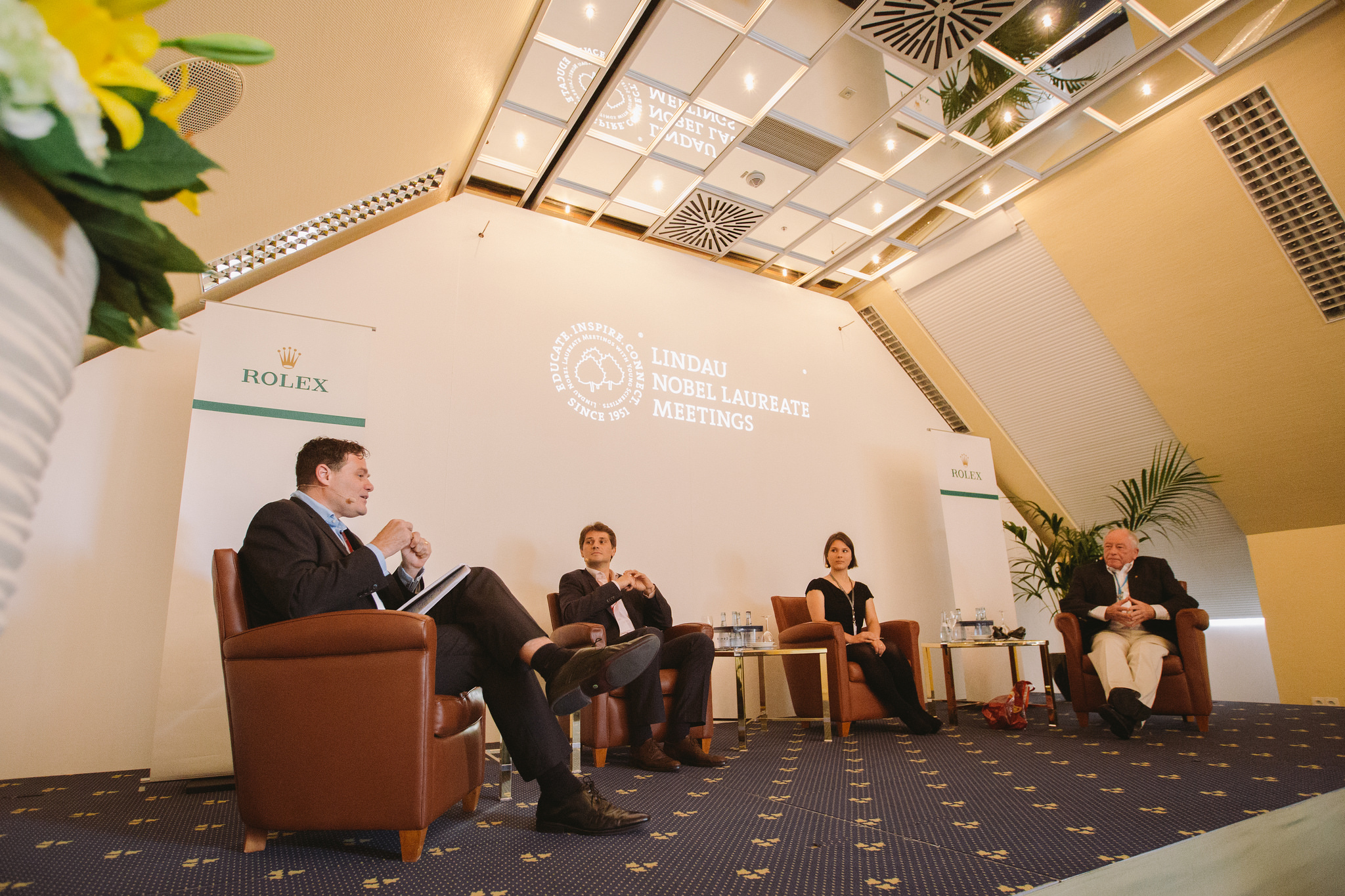 Also representing ETH Zürich at the master class was Bettina Heim, a Master’s candidate in physics with a background in competitive figure skating. Her achievements in the sport include competing at two World Junior Championships, two World Championships, and becoming Swiss national champion in 2011. Only a short time after, Heim decided to hang up her skates and study physics full-time.

Her Bachelor’s studies culminated in a paper published by the prestigious journal Science in 2015, titled “Quantum versus classical annealing of Ising spin glasses.” It shows that evidence of quantum speed-up may depend on how the problem is described, as well as how the optimization routine is implemented. Today, Heim continues her research in the field of quantum computing, mostly in the realm of adiabatic quantum computing and quantum error correction, at ETH Zürich’s Institute of Theoretical Physics.

However, her focus during Wüthrich’s master class remained firmly in the world of sport and not quantum computers — in particular, she discussed the physics behind her specialty of figure skating. For instance, an athlete must gain a lot of speed going into a spin, and then one side of the body has to stop so the other can pass. This translates velocity into rotation, which results in the many types of spin moves performed by figure skaters.

As in downhill skiing, injuries remain prevalent in figure skating despite not being a contact sport. Common injuries for skaters include stress fractures, acute injuries involving tendons or ligaments, and back injuries. Heim noted that back injuries often originate from jump impacts (which can be hard on the spinal discs) and extreme positions that require flexibility (tough on muscles and ligaments).

As Wüthrich’s fascinating master class reiterated, the connections between sports and science go way beyond the physics of motion. Sometimes, an athlete and a scientist can be found within the same person.