Digging for the Roots: Cancer...
Back
Weed is a phenomenon that has annoyed many gardeners. Fortunately, there is a pretty straightforward way to get rid of it: “You can keep cutting the leaves off the weed, but the weed will regrow. But if you cut the tap roots, the leaves will wither away.” This is the ever so perspicuous advice given to us by John Dick, Senior Scientist at the University of Toronto, and one could not be blamed for, at first glance, finding it to be of an apparently trivial nature. But John Dick’s interests do not lie in gardening, and his advice is, in fact, not at all about getting rid of weed. Instead, it is a comment of far greater usefulness: about getting rid of cancer, a disease that we are, in most instances, to this day not able to cure. But what are cancers equivalents of a plant’s roots? They may well be a group of cells termed ‘cancer stem cells’, and great hopes have been set into treating cancer by targeting them. Since hope and hype often lie closely together, let us examine what this is all about… 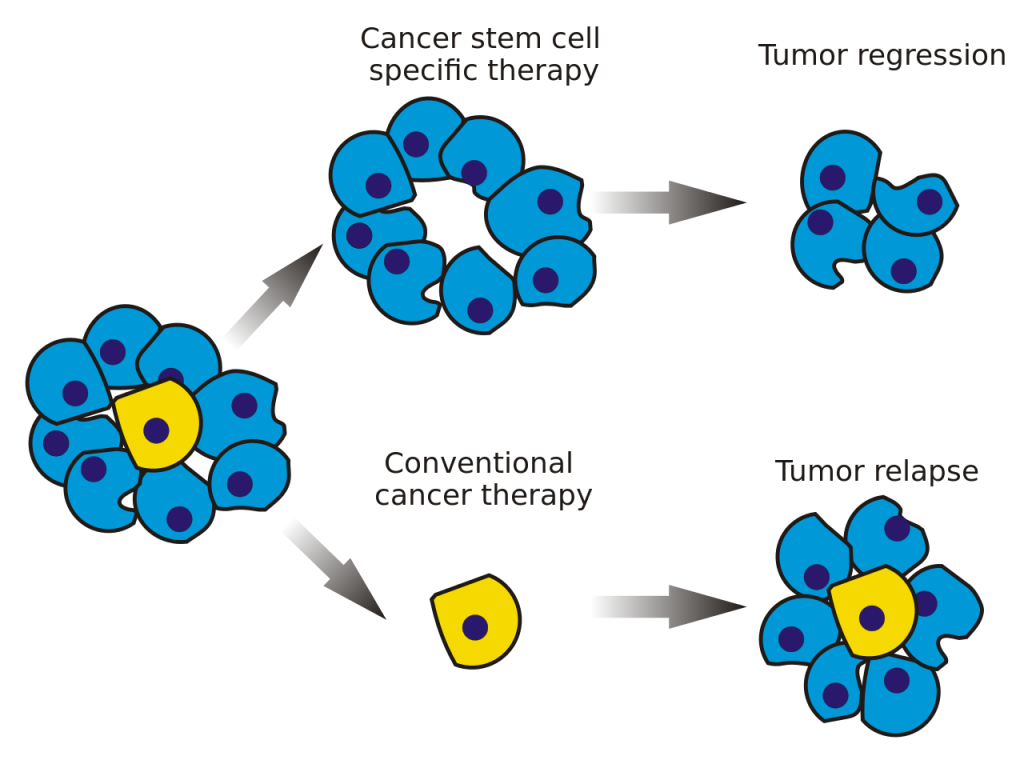 The cancer stem cell hypothesis proposes that not all tumor cells have equal capacities. Rather, each tumor contains a small subset of cells with stem cell-like capacities that are responsible for initiating and sustaining tumor growth, while the bulk of the tumor cells lacks this ability. Importantly, they are also thought of as the culprits for cancer relapse, which can occur many years after the initial tumor has been treated. In fact, it is thought that common chemotherapies, targeting the fast-dividing cells, leave the relatively slow-dividing tumor stem cells unharmed and thus pave the way for an eventual relapse. Moreover, cancer stem cells also have been shown to exhibit a higher resistance to radiation treatment as well as a higher invasiveness correlating with a worse cancer prognosis. In short, if a cancer cell may be considered evil, a cancer stem cell is a lot worse! A common misconception about the research field is that a tumor stem cell is actually a subtype of stem cell and that hence, cancer derives from stem cells. This is not the case. The term “tumor stem cell” only reflects the fact that this is a tumor cell with capacities similar to normal stem cells, such as the capability to maintain itself indefinitely. Tumor stem cells are mistaken for the “cell of origin” of a tumor. The actual cell of origin is different in each type of tumor, and does not have to be atumor stem cell. In some cases, for example with a type of brain tumors called gliomas, it is not even known yet. 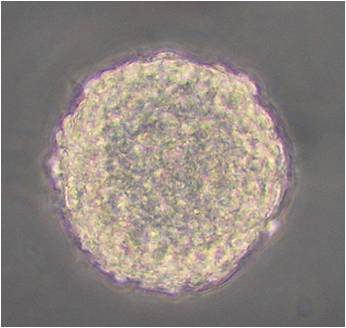 But how did this research field come about ? In the Sixties, it was discovered that not all tumor cells have equal tumor-forming capabilities. 30 years down the road, in 1997, cancer researchers Dominique Bonnet and the above mentioned John Dick published a major report on their recently discovered leukemia stem cells in Nature Medicine, thereby starting off a whole new field in cancer research. The cancer stem cell theory was born, and the following years saw the discovery of such cells in many other cancers like breast, brain or prostate cancer. As with every theory in science, it initially had to face lots of doubt and criticism. A breakthrough was made in 2012, when three independent studies were published, all of which heavily supported the hierarchical organization of cells and hence, the cancer stem cell concept using scientifically powerful and conclusive techniques for tracing single tumor cells and their offspring in vivo. Ever since, there has been no more doubt about the general existence of cancer stem cells. A lot of effort in tumor stem cell research has always been directed to finding a so-called marker, a molecule whose presence on a cell reliably identifies it as a cancer stem cell. To this date, no such reliable molecule has been identified – in one way or another, all proposed and utilized markers are disputed and controversial. In fact, it is unlikely that the marker problem is going to be solved at all, and it may be a better bet to try to define them according to their functional properties rather than their surface molecules, although arguably the latter would make therapeutic targeting easier. Unfortunately, a lot of literature in the field is purely based on assays in the petri dish, often conducted not even with primary cells directly derived from patients (which are more difficult to obtain) but with cells derived from long-grown cell lines instead, which are less representative of real tumors. On the other hand, first clinical trials with drugs designed to target cancer stem cells are now under way, so far yielding moderately positive results. Doubts about the existence of cancer stem cells may have been washed away in 2012, but that has not made things much easier. Indeed, we only gradually begin to realize that things may be a lot more complicated and less clear-cut than they initially appeared to be. A major new insight is the realization that different tumors of the same type may rely on entirely different tumor stem cell populations. As if that had not been complicated enough already, it has been discovered that even the very same tumor can harbor multiple different stem cell populations in its midst! And on another note, it may be possible that some cancers follow the cancer stem cell model while others do not. It is difficult to predict what the future will hold for the cancer stem cell field, but it is likely that the abovementioned insights will eventually transform our approach to the questions at hand. First, cancer stem cells have appeared to be a huge trend, even hype within cancer research throughout the last one and a half decades, but the hope set into them stands on a solid experimental basis and is thus justified. Nevertheless, the field is – also due to the lack of standard conditions for important methods – currently struggling with many issues such as the challenge of developing a clear definition of what tumor stem cells actually are and how they can be identified. As with other potential cancer therapies, no one can tell if these efforts will pay off in terms of clinical results – but there is a good chance that they will and the research area might well be headed for a future Nobel prize. So let us all keep our eyes and ears open to future developments in this exciting field! Slider image: Steve Garry (CC BY-ND 2.0)

Minu Dietlinde Tizabi, Lindau Alumna 2015, studied medicine and recently graduated as a physician at the University of Heidelberg. Her main scientific interest is devoted to cancer research. For two years, she has conducted research for her MD thesis on the subject of brain tumor stem cells at the German Cancer Research Center (DKFZ). As a student of the MD/PhD-Program of the University of Heidelberg, she is set to pursue a PhD in biosciences as of 2016. Minu will attend the 65th Lindau Nobel Laureate Meeting as a Young Scientist.
Follow her on Twitter: @MinuDTizabi