Eager to find out what impact blogging and social media could have on the dissemination of her work, Melissa Terras took all of her academic research, including papers that have been available online for years, to the web and found that her audience responded with a huge leap in interest in her work.

In October 2011 I began a project to make all of my 26 articles published in refereed journals available via UCL’s Open Access Repository – “Discovery“. I decided that as well as putting them in the institutional repository, I would write a blog post about each research project, and tweet the papers for download. Would this affect how much my research was read, known, discussed, distributed?

I wrote about the stories behind the research papers – the stuff that doesn’t make it into the official writeup. From becoming so immersed in developing 3D that you start walking into things in real life, to nearly barfing over the front row of an audience’s shoes whilst giving a keynote, to passive aggressive notes from an archaeological dig that take on a digital life of their own, I gave a run down, in roughly reverse chronological order, of the 12 or so projects I’ve been involved in over the past decade that resulted in published journal papers. Along the way, I wrote a little bit about the difficulties getting stuff up there on the institutional repository in the first place, but the thing that really flew was my post on what happens when you blog and tweet a journal paper: showing (proving?) the link between blogging and tweeting and the fact that people will download your research if you tell them about it.

So what are my conclusions about this whole experiment?

Some rough stats, first of all. Most of my papers, before I blogged and tweeted them, had one to two downloads, even if they had been in the repository for months (or years, in some cases). Upon blogging and tweeting, within 24 hours, there were, on average, 70 downloads of my papers. Now, this might not be internet meme status, but that’s a huge leap in interest. Most of the downloads followed the trajectory I described with the downloads to Digital Curiosities, in that there would be a peak of interest, then a long tail after. I believe that the first spike of interest from people clicking the link that flies by them on Twitter (which was sometimes retweeted) is then replaced by a gradual trickle of visitors from postings on other blogs, and the fact that the very blog posts about the papers make them more findable when the subject is googled. People read the blog posts – I have about 2000 visitors here a month, 70 per cent new, with an average time on the site of 1 minute and 5 seconds. 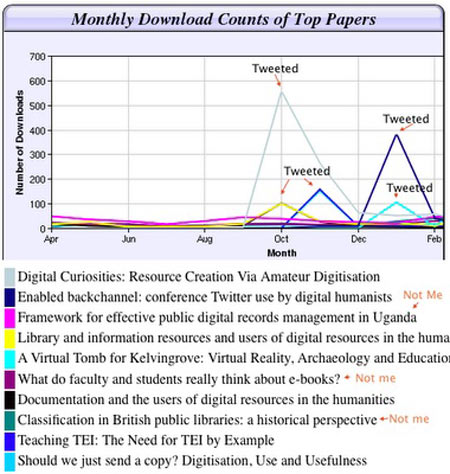 The image above shows the top ten papers downloaded from my entire department over the last year. There were a total of 6172 downloads from our department (UCL Department of Information Studies is one of the leading iSchools in the UK). Look at the spikes. That’s where I blog and tweet about my research. I’m not the only person producing research in my department. You will see that 7 out of 10 of the most downloaded papers from my Department in the last calendar year have me in the author list. 27 out of the top 50 downloads in our department in the last calendar year feature me (as a rough guide, I get about 1/3 of the entire downloads for my department). My stuff isn’t better than my colleagues’ work. They’re all doing wonderful things! But I’m just the only one actively promoting access to my research papers. If you tell people about your research, they look at it. Your research will get looked at more than papers which are not promoted via social media.

Some obvious points and conclusions. Don’t tweet things at midnight; you’ll get half of the click throughs you get through the day when people are online. Don’t tweet important things on a Friday, especially not late – people do take weekends and you can see a clear drop off in downloads when the weekend rolls around. The best time is between 11am and 5pm GMT, Monday to Thursday in a working week. But somehow the message doesn’t get through to people that just putting it on twitter isn’t enough, you have to time it right. The Discovery twitter account regularly posts an automated list of the really interesting things people have been looking at… at 10pm on a Friday night. Sheesh. I only know as I’m regularly sad enough to still be on Twitter at that time, but I suspect if they tweeted the papers through the day during the working week… well, you guess what would happen?

The paper that really flew – Digital Curiosities – has now been downloaded over a thousand times in the past year. It was the 16th most downloaded paper from our entire institutional repository in the final quarter of 2011, and the 3rd most downloaded paper in UCL’s entire Arts Faculty in the past year. It’s all relative really – what does this really mean? Well, I can tell you that this paper was the most downloaded paper in 2011 in LLC Journal, where it was published (and where it lives behind a paywall apart from being available free from Discovery). LLC is the most prestigious journal in the discipline I operate in, Digital Humanities. The entire download count for this paper from LLC itself, which made it top paper last year? 376 full text downloads. There have been almost 3 times that number of downloads from our institutional repository. What does this mean? I think its fair to say: It’s a really good thing to make your work open access. More people will read it than if it is behind a paywall. Even if it is the most downloaded paper from a journal in your field, Open Access makes it even more accessed.

However. I might just have written a nice paper that caught people’s interest: there are, after all, no controls to this are there? How can we tell if papers would fly without this type of exposure? Well, I might not have tweeted one or two papers to see the difference between tweeting and blogging about papers and not doing so. Take the LAIRAH (Log Analysis of Internet Resources in the Arts and Humanities) project, which I wrote about here. We actually published four papers from this research. I tweeted and promoted three of them actively. One I didn’t mention to you. Here are the download counts. Guess which one I didn’t circulate?

The papers that were tweeted and blogged had at least more than 11 times the number of downloads than their sibling paper which was left to its own devices in the institutional repository. QED, my friends. QED.

I can’t know if the downloaded papers are read though, can I? The only way to do so is to enter the murky world of citation analysis. The trouble with this is the proof of the pudding will come to light in a few years’ time – if someone reads something of mine now and decides to cite it, it’s going to take 1 or even 2 years – or more – for it to appear in my citation list. So, I’ll be keeping an eye on things, not too seriously as we all know things like H index are problematic.
The final point to make is that people don’t just follow me or read my blog to download my research papers. This has only been part of what I do online – I have more than 2000 followers on twitter now and it has taken me over 3 years of regular engagement – hanging out and chatting, pointing to interesting stuff, repointing to interesting stuff, asking questions, answering questions, getting stroppy, sending supportive comments – to build up an “audience” (I’d actually call a lot of you friends!)

If all I was doing was pumping out links to my published stuff would you still be reading this? My blog is similar: sure, I’ve talked about my research, but I also post a variety of other content, some silly, some serious, as part of my academic work. I suspect this little experiment only worked as I already had a “digital presence” whatever that may mean. Thanks for putting up with me. All these numbers, these stats. Those clicks were made by real people. Thanks!

So that would be my conclusion, really. If you want people to find and read your research, build up a digital presence in your discipline, and use it to promote your work when you have something interesting to share. It’s pretty darn obvious, really:

This is an edited version of a blog post that was first published on Melissa Terras personal blog and on London School of Economics ‚The Impact Blog‘. Melissa Terras is also on Twitter: @melissaterras.