The art of the artificial:...
Back
The report that an artificial rat foreleg was successfully “cultured” made the rounds. For some, it would be a dream come true; for many others, doubtless a gruesome thought: a replacement arm grown in the lab for its new human owner. No doubt about it: the loss of an extremity is a severe impairment, and even the prostheses that have since become very sophisticated have the disadvantage of not being capable of completely replacing all functionalities. Add to this the fact that all transplants still entail the major problem of rejection, which must be suppressed with immunosuppressants. The scientists who are attempting to grow body parts therefore argue that they would eliminate the disadvantages and offer a true replacement by grafting cells from the patient’s own body onto a “base material”, so to speak, and let them grow there. Then the patient’s custom-made replacement arm would be transplanted, avoiding the rejection reactions that otherwise occur. How does this work in the rat experiment? First, the living cells of a donor organ are removed using a method known as “perfusion decellularization”, which was developed by scientist Stephen F. Badylak at the University of Pittsburgh. The remaining support structure is then repopulated with the appropriate cells. In other words, the muscles and blood vessels are united with cells of suitable phenotypes, and the resulting tissue system is electrically stimulated in a “perfusion bioreactor”. When this process is complete, the biotransplant is ‘connected’ to a real organism – in this case, transplanted onto a rat. It was a perfect sensation when the rat organism indeed began to supply the transplanted foreleg with blood, and the paw opened and closed upon electrical stimulation. However, there is as yet no lengthy experience relating to the further development – that is, whether the transplant is reliable long-term. So far, the laboratory of Harald Ott at the Richard B. Simches Research Center in Boston has already used this method to regenerate heart, liver and lungs from animal models, but no regenerative limbs. “This is the first attempt to make a biolimb, and I’m not aware of any other technology able to generate a composite tissue of this complexity”, says Harald Ott, discussing his research. At the same time, however, he emphasises that it would probably be another decade before the first limbs that could be tested in humans would be sufficiently developed. 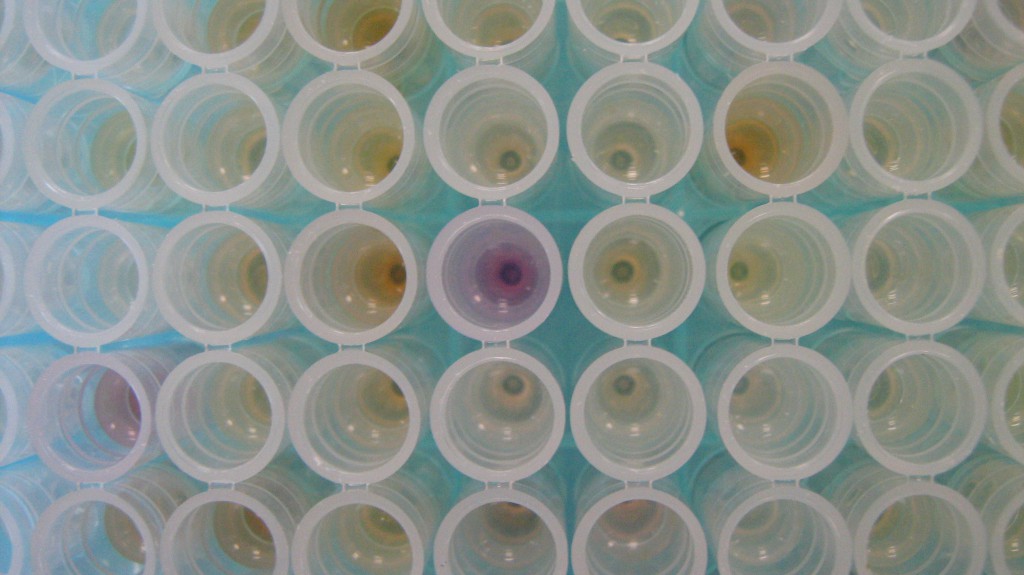 Synthetic biology unites various disciplines: biologists, chemists and engineers collaborate in multinational teams. Biologists become designers of molecules, cells and organisms, and engineers enrich biology by contributing their knowledge to the design process. Ginkgo Bioworks in Boston is a prime example of this development. They want to produce organisms on a large scale. One of their projects is the “foundry”, as explained on the company’s website: “We use our foundry to do the complex work of developing a wide range of organisms for different markets. Our foundry uses new technologies that make organism engineering simpler and faster than ever before”. Thanks to the latest software and robot technology, the facility boasts a fully automated production line for synthetically produced “biomaterials”. For instance, Gingko manufactures yeast cells that develop rose aromas and fragrances. The spectrum is diverse and extends to a regulatory DNA element for continuous RNA synthesis. One of the founders of this company is high-flyer Tom Knight, originally a computer engineer and later a proponent of synthetic biology, who is sometimes referred to as the “father of synthetic biology”. But while the company is busily producing organisms, the discussion about what can be patented and is thus more likely to sell is still open. The co-founder of Gingko Bioworks, Reshma Shetty, says it doesn’t really make sense to patent individual building blocks, and that her company is taking a middle course: filing patents on sophisticated products, but also supporting Open Source projects. Supposedly, the majority of representatives of synthetic biology want a solution that allows both protection of intellectual property and concessions to public use. The complexity is the key factor: “If you compare bio-building blocks with Lego, then the individual blocks would be authorised for use, and only the construction of a complex spaceship from hundreds of Lego bricks would be patentable.” It was the behaviour of pioneer Craig Venter, who was the first to successfully produce a genome and implant it in a cell in such a way as to create a viable bacterium, that sparked off the patent discussion just when synthetic biology started taking off. Venter is considered to be a relentless businessperson, applying for thousands of patents on sequenced genomes while, in parallel, the publicly financed “Human Genome Project” was still in progress. However, his pioneering role and his scientific achievements are beyond dispute. 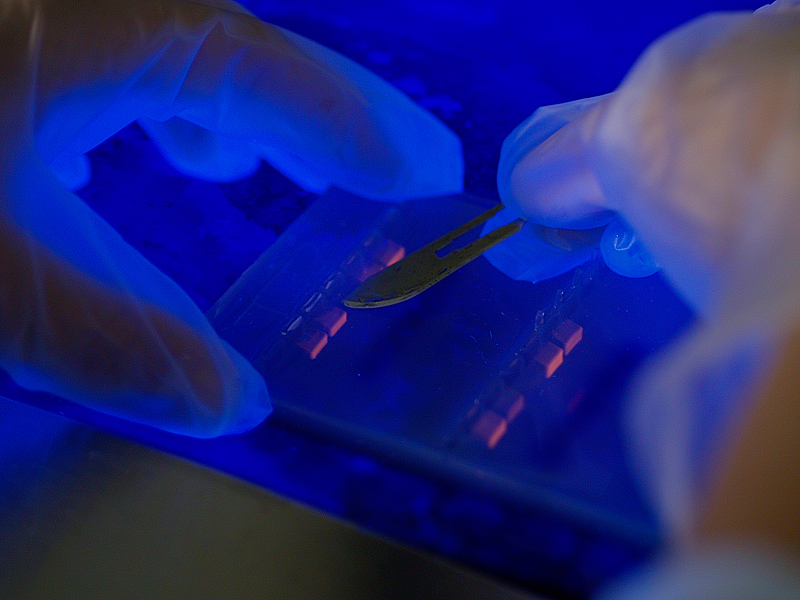 Slicing out DNA bands, prior to sequencing them. Credits: Diego Cantalapiedra, CC BY-NC-SA 2.0

As at the start of any new development, there was a vacuum of sorts into which research was initially done until, in parallel, the first utilisation opportunities began to sprout up, and the pioneers attempted to stake their claims. Slowly, government and other regulatory elements entered the picture. Attempts were made to foster the research, but at the same time, also to direct its course. Synthetic biology developed at an exponential rate, from the first few papers published in 2003 to more than 800 in 2013 on just one of the relevant scientific platforms alone. Synthetic biology has therefore been developing as an organised research field for a bit more than ten years. And it is a vast field, from synthetic fungal enzymes, which are useful for the chemicals industry, to biological building blocks for personalised cancer therapy. In the search for the cancer treatment of the future, one particular company is causing quite a stir: “Pink Army” is the name of Andrew Hessel’s crowdfunding project. His vision: “Can you imagine a cancer treatment made just for you, in a day, for free? One with almost no side-effects?” And he answers his own question, writing that it sounds like science fiction, but is within the realm of possibility if everyone works together. Hessel and his staff want to use freely available methods and building blocks to provide personalised products that benefit patients, without massive advance funding and without a jungle of patents. So this young discipline is teeming with players from a broad range of backgrounds, from big pharma to ambitious start-ups and crowdfunding to charitable organisations that advocate the use of bioengineering in the interest of the public good. Now the struggle is on to create standards for this research, which continues to grow at a rapid pace. This is in its own interests because, unlike in the case of silicon-based electronic devices, the synthetic organisms created from genetic components don’t – yet – always have predictable properties. In spring of this year, representatives of universities, industry and government met at Stanford University in California to establish a “Synthetic Biology Standards Consortium”. The impetus for the meeting came from the US National Institute of Standards and Technology. These efforts can also be understood as the maturing process of an industry in which the Wild West phase is coming to an end. However, it isn’t about evaluating and assessing the risk of the field as a whole, but about optimising the research process and establishing technical research standards. Duplicate research work should be avoided and processes should be reproducible. In addition, there has never been any standard for describing what scientists knew about a certain biological resource. The possibilities of synthetic biology go well beyond those of pure genome editing – but the knowledge of its possibilities isn’t yet as widespread as would befit this research field. Slider: DNA distribution, igemhq, CC BY 2.0