One-Way Street Toward Interdisciplinarity?
Back
For a successful interdisciplinary team – bring in some real experts!  Interdisciplinarity is defined as creating something new by crossing disciplinary boundaries, like a research project involving biology, physics and chemistry simultaneously. That pretty much describes the work of Hartmut Michel, Johann Deisenhöfer and Robert Huber; they shared the Nobel Prize in Chemistry 1988. These three researchers had described the three-dimensional structure of a bacterial membrane protein complex with the help of x-ray crystallography. Just to keep track of the disciplines involved: the research question came from biology (membrane proteins are difficult to crystallise, so their atomic structure is difficult to determine), the method of x-ray crystallography came from solid-state physics, the Nobel Prize was awarded in chemistry, and future applications may be in medicine or in other disciplines. 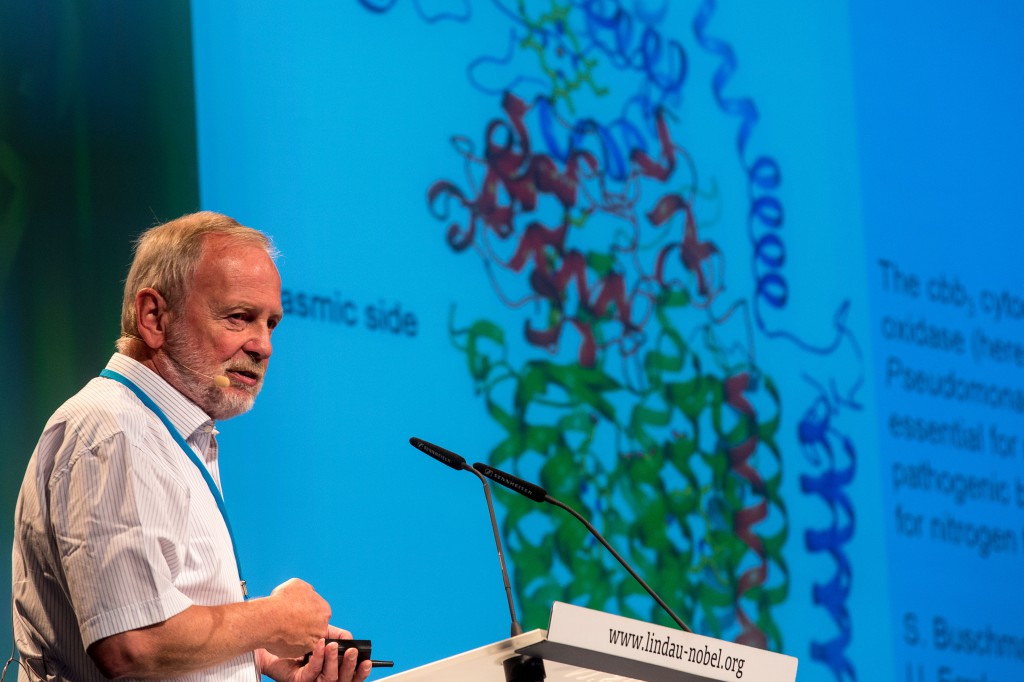 Hartmut Michel won the 1988 Nobel Prize in Chemistry, together with Johann Deisenhofer and Robert Huber, for the structural description of a membrane protein with x-ray crystallography. #lnlm14. (c) Ch. Flemming LNLM

In fact, if you look closely, many Nobel laureates in the natural sciences employed methods from other disciplines in order to find something new. Peter Agre used x-ray crystallography as well to describe the structure of a newly discovered protein, even before he knew its function. (Peter Agre commented his findings in Lindau this year: “A protein without a function is like a scientist without a grant.”) He received the Nobel Prize in Chemistry in 2003, and now applies his findings in medicine, in malaria research. Especially medicine and molecular biology rely heavily on imaging techniques from physics, just as pharmaceutics rely on chemistry, molecular biology and medical research. Another laureate example: Hamilton Smith could never have found the restriction enzymes, for which he was awarded the Nobel Prize in Physiology or Medicine in 1978, without his in-depth training in mathematics. 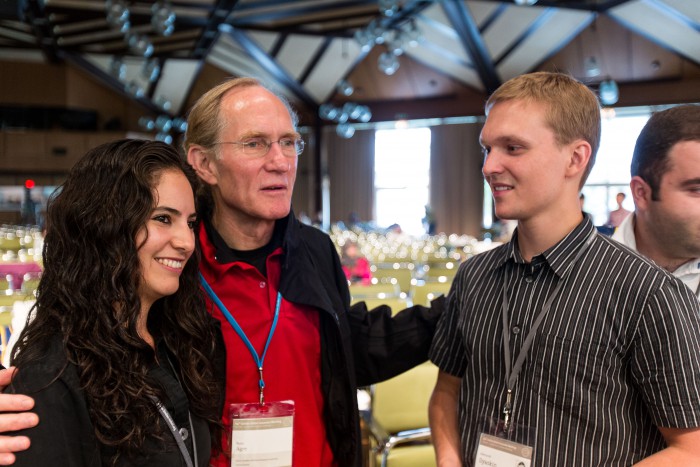 On the other hand: In order to be successful in academia, even within an interdisciplinary project, you often need to be excellent in one specific field first before you reach out to other disciplines. After all, an expert is still a person who knows very much about very little, and a successful team often consists of many experts in this sense. All researchers mentioned above have had rigorous training in their field. But if you have become an ‘expert’ in this sense – will you still have the open-mindedness and tolerance necessary to accept the language, the approaches and methods of a ‘strange’ discipline? The researchers mentioned obviously had. 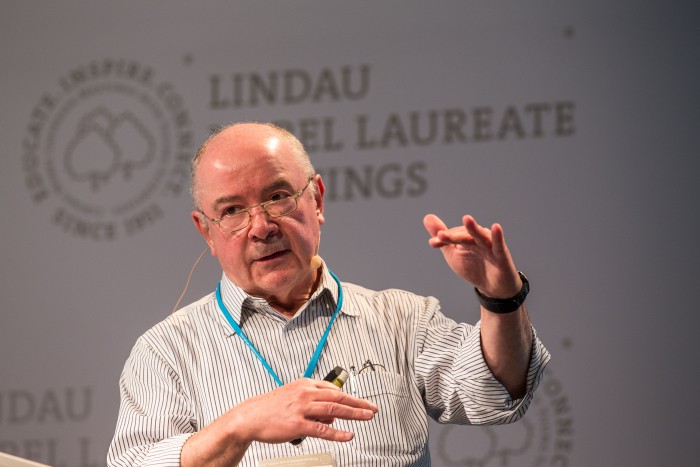 Johann Deisenhofer was another recipient of the 1988 Nobel Prize in Chemistry. #lnlm14 (c) Ch. Flemming/LNLM

If interdisciplinarity were the way to heaven or at least to happiness – why do most inter-disciplines try very hard to become ‘real’ disciplines? A few examples are nanotechnology, environmental studies or minority studies; neuroscience and biochemistry have already succeeded. That is because a discipline has many advantages: its own professors, its own budget within the university, its own journals. And a discipline facilitates careers: peer reviewers and evaluators for academic jobs are often from one discipline alone, and might be prejudiced against young colleagues who work with interdisciplinary approaches, seeing them as not being ‘scientific’ enough. So interdisciplinarity has its drawbacks – and it is probably easier to establish nanotechnology as an accepted discipline, with its countless technical applications, than some interdisciplinary cultural or minority studies programme. Interdisciplinarity is always about something new: new problems, new solutions, new technologies. Sometimes it is also about neglected problems (like the environment) or neglected groups. “Making the method fit the problem” could be its motto – not the other way around. And it has shown that it can release creative energy in science. But currently, many interdisciplinary studies programmes for undergraduates are being closed in the US, and there is an ongoing debate whether interdisciplinary studies are too demanding for the average undergraduates – or whether these closings are the result of ‘disciplinary hegemony’, i.e. the disciplines fighting back. Then again: something new often has to prove itself, has to live through times of conflict, before finding its place. So let’s keep an open mind about other disciplines, and let’s look forward to many new disciplines to come!