Oliver Smithies: How potatoes revolutionised...
Back

Talking about his long life, Oliver Smithies often starts by conjuring up his happy childhood in pre-war Yorkshire. Banned from sports for health reasons, young Oliver spent much time with his best friend in the friend’s workshop; this friend’s father was a precision time clocks manufacturer and provided an attic workshop for his son. Before the age of 11, Oliver Smithies knew for sure that he wanted to be a scientist – but he didn’t know the word for his vocation. “The best I could come up with was: I want to be an inventor – as a result of reading comic strips about inventors,” he tells the rapt audience in his 2015 lecture at the 65th Lindau Nobel Laureate Meeting. 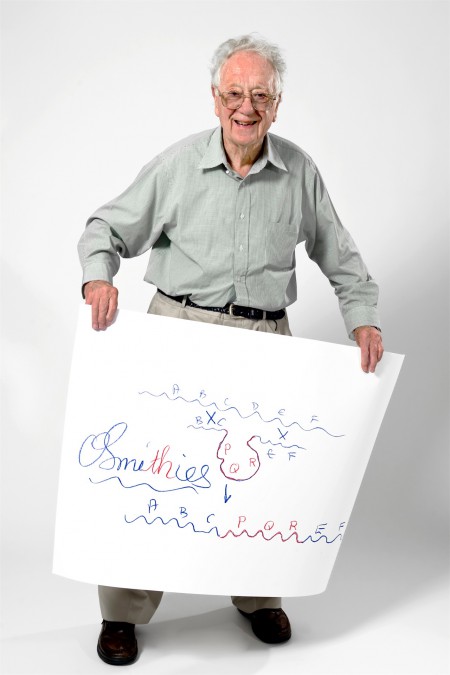 Oliver Smithies with a sketch of his work that won him the Nobel Prize in 2007. Here Smithies illustrates the method of gene targeting. When he started sketching, he asked the photographer: “Is this red?”, for Smithies is colour blind. Photo: Volker Steger, Sketches of Science, Lindau Nobel Laureate Meetings

Oliver Smithies was awarded the 2007 Nobel Prize in Physiology or Medicine, together with Mario Capecchi and Martin Evans, “for their discoveries of principles for introducing specific gene modifications in mice by the use of embryonic stem cells.” But when he tells his life story, he seems to prefer telling earlier stories, for instance about his invention of gel electrophoresis while working in Toronto in the 1950s. Before that, he had done postdoc work at the University of Wisconsin-Madison on a Commonwealth Fund fellowship, but this fellowship precluded his staying in the US afterwards. Normally he would have returned to the UK, but he had just gotten engaged to Lois Kitze, a graduate student in Wisconsin, so he started looking for a postdoc position in Canada.

He found work with David A. Scott in Toronto, a renowned insulin expert. In Toronto the very first diabetes patient had been treated by Frederick Banting with animal insulin in 1922. Only one year later, Banting received the Nobel Prize in Physiology or Medicine. When Smithies arrived in Canada, Scott told him: “You can do anything you like, as long as it has to do with insulin.” So Smithies set out to find an insulin precursor: “Now we know there is a precursor, but I didn’t discover it”, he says with a smile. He proceeded by studying insulin with the help of electrophoresis, but he soon became very frustrated with the method. Back then it was mostly conducted with filter paper that had been soaked in a buffer, then the sample was applied and allowed to migrate, but the results looked like long smears that didn’t help his research.

Then Smithies came across the recent work of Henry Kunkel and Robert Slater. The researchers had started to use a box filled with starch grains surrounded by a buffer, “rather like a sand box”. The results from this box were nice, clear peaks for each protein. But the downside was: you had to cut the probe into 40 slices and conduct a protein determination on every slice for a single electrophoresis run. “I didn’t have a technician, I couldn’t do that,” says Smithies in retrospect. “Then I remembered helping my mother doing the laundry.  She took starch powder and cooked it up with hot water and made a slimy substance that she would apply to the collars of my fathers shirts.” His father had been selling insurances to Yorkshire farmers and needed to look respectable. And at the end of a laundry day, the starch had settled into a jelly.

In Toronto in early 1954, Smithies made a gel from potato starch and stained it with insulin, creating a very nice, distinct band in the gel. (Incidentally, this first batch of gel would be the best for a long time.) In order to obtain his samples, Smithies often used his own blood. But “I was tired of bleeding myself, so I got blood from my friends – that’s what friends are for, isn’t it?” Now he could start to compare blood samples from different individuals. He soon discovered some extra banding patterns that some people had and others hadn’t; later he found, with the help of the Canadian geneticist Norma Ford-Walker, that this was a complicated genetic difference: haptoglobin types. Smithie says himself that he considers himself lucky that “Scotty” allowed him to pursue his research on blood proteins even though it had nothing to do with insulin.

But the quality of the potato starch remained a problem. Smithies tried different potato brands from all over Canada and the US, but none could reproduce the good results from his first batch. Finally he discovered this batch had been imported from Denmark. When Smithies’ work load kept increasing, he agreed to employ a technician, Otto Hiller from Germany. In 1960, Hiller even accompanied him back to Wisconsin, not as a researcher but as a manufacturer of gel electrophoresis equipment, mainly the plastic parts and the power supply, plus Danish potato starch that he sold to labs around the world. Gel electrophoresis is still widely used in medicine, research and even forensics today, for identifying certain proteins, for diagnostics, and for genetic fingerprinting.

When Smithies presents his results from the 1950s today, he shows his old pencil sketches – he didn’t own a camera in 1954 – and handwritten lab books. He explains this and urges his listeners, mostly graduate or PhD students and postdocs, to always make hard copies of important data. “This is a data file that is almost sixty years old – you won’t be able to produce your data file 60 years from now if you don’t make a hard copy!” They shouldn’t rely on their computers, “because you cannot read a floppy disk now, and you won’t be able to read a CD in ten years from now”: very sound advice indeed from a ninety-year-old.

Hobby pilot Oliver Smithies in front of his airplane. Despite being colour blind, he was able to get his pilot license and even train student pilots – and he still enjoys flying his glider. (Screenshot from his Nobel Lab 360°)

In 1978, Smithie’s first marriage ended, “and several years later I followed my mother’s example by falling for my post-doctoral student, Nobuyo Maeda”. In the early 1920s, his mother had been teaching English at Halifax Technical College where she met Smithie’s father, one of her students. When the Japanese researcher Maeda found a position at the Department of Pathology at the University of North Carolina, the couple left Wisconsin together and settled in Chapel Hill where they still live – and work. Smithies admits that he feels most at home in the lab: “This is where I’m most comfortable, I’m most relaxed and enjoying myself when doing experiments.” More recently, he’s been working with gold nanoparticles to see if the kidney separates proteins by gel permeation.

Oliver Smithies has attended the Lindau Nobel Laureate Meetings four times, and the audiences of his lectures were always delighted by his humorous, modest and lively presentations. Two of these lectures can be viewed as videos, and two Nature videos with Smithies interviews are available here. There’s also a Nobel Lab 360°: with this collection of videos, interviews and pictures, you can ‘visit’ Smithies in his lab in Chapel Hill – his favourite place in the world!