Future Chemistry: Learning from Nature...
Back

Frances Arnold opened the day with her session about Chemistry.

Chemistry is all around us – and not just around us. We are chemistry. The atoms in our body, the water we drink, the energy we use to power the device you are reading this right now, that’s all part of a chemical system that we are now understanding in unprecedented detail. In a series of lectures and debates at #LINOSD, multiple Nobel Laureates discussed recent progress and future prospects, and there are reasons to be both concerned and excited.

We owe much of our recent technological progress to advances in chemistry and few people understand that better than Frances H. Arnold. Arnold is one of only five women to ever be awarded the Nobel Prize for Chemistry and one of only two in the past half-century. She was awarded the prize in 2018 “for the directed evolution of enzymes” and that’s exactly what she presented to the online audience at Online Science Days.

“Today, we have remarkable technologies,” Arnold says. “We have the ability to read any DNA we want, any DNA sequence, we can write any DNA we want, you can synthesize the actual genetic material, put it in a test tube, we can edit DNA.” But we are not yet the absolute masters of DNA. “What we cannot do is compose DNA. To me, it’s like a Beethoven symphony. It’s beautiful, it’s intricate, and we haven’t learned how to write like this,” Arnold adds.

So instead, researchers look for a bit of help from the neighboring field of biology. This is not a new idea in itself. Human beings have altered the natural world at the level of the DNA for thousands of years, using evolution by artificial selection to tweak organisms to our needs and desires. From agricultural plants to dog breeds humans have used evolution to modify DNA for thousands of years, although our methods have improved in recent times. What Arnold did is to take the process to the next level and rely on the evolution of enzymes instead of organisms. 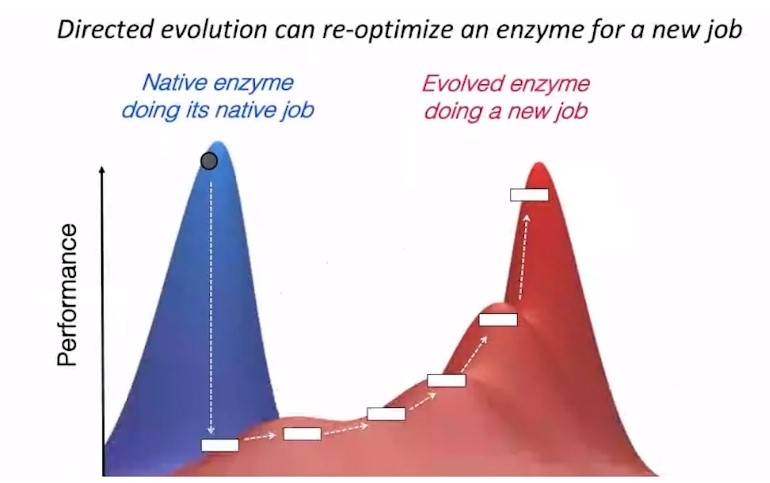 DNA is in the focus of Frances H. Arnold.

Turns out, the idea of taking inspiration from nature is quite popular among chemists. “I believe micrororganisms are much better chemists than we are,” says Fatima Enam, a Postdoctoral Fellow at Stanford University during the debate Green Chemistry – Green Fuels. Enam works at the intersection between synthetic biology and chemistry, focusing on how to improve the arsenal of techniques available to chemists by learning from the natural world.

This idea may have once been science-fiction, but it has long left the realm of fiction and entered into reality. From biofuel and biocatalysts to renewable energy and waste treatment, bio-inspired chemistry is booming and we need it more than ever. A major reason for this is that we cannot delay our energy transition any longer, says Robert Schlögl, director of the Max Planck Institute for Chemical Energy Conversion in Mülheim an der Ruhr. Schlögl estimates that we need to reduce our carbon dioxide emissions by about 1,000 million tons every year to reach the 2030 goals set in the Paris Agreement. We’re far from reaching that goal.

The Father of Lithium-Ion Battery

The problem isn’t necessarily that we don’t have the fundamental science or the technology to transition to renewable energy, the problem is “political and social,” Schlögl says. So what we need is for innovation to also come from industry, not just from academia, and we’ve seen that happen many times before. Stanley Whittingham, who was awarded the Nobel Prize for Chemistry in 2019 “for the development of lithium-ion batteries” is widely regarded as the ‘Father’ of the lithium-ion battery. Whittingham invented the device while working at a company now known as Exxon-Mobil – the world’s largest fossil fuel company. His talk about Batteries was the third session about Chemistry-issues during Tuesday, 30 June 2020.

It is perhaps ironic that this Exxon-patented invention is now so instrumental in our transition from fossil fuels to renewable energy. “Solar and wind, the energy output varies second to second, so you have to smooth it and batteries are good at that. They’re also good at shifting the load to when you need it. Wind generally blows at night, you don’t need electricity then, and the sun shines in the middle of the day and you need the most electricity between 4 PM and 6 PM.”

We need better batteries if we want to transition to renewables, says Hartmut Michel, who was awarded the Nobel Prize in 1988 for helping unravel the chemical mysteries of photosynthesis. We’ve become quite good at emulating photosynthesis ourselves, says Michel, and in a way, our technology is actually better than photosynthesis. Plants store around 1% of the energy they receive from the sun, whereas solar panels nowadays have an efficiency of around 20%. But we need robust and reliable batteries to spread this energy according to our needs — and we need them to be economically viable.

In order for batteries to be economically viable, we need to consider different materials. Lithium is expensive and impossible to recycle, says Kwadwo Owusu, Wuhan University of Technology. We need to find alternatives that are cost-effective and sustainable, and that will be an international challenge. Thankfully, researchers have proven tremendously resourceful when it comes to generating solutions.

Proud of Being a Chemist

“I’m very proud of being a chemist, because chemistry is capable of generating high values from nothing,” says Ryōji Noyori, a Japanese chemist who was awarded the Nobel Prize in Chemistry in 2001. However, this is not a simple situation. “We should realize what the limits of our planet are and that the future is unpredictable.” So can the world realistically switch to a sustainable future in time, by 2030? Michel is cautiously optimistic. “There might be ‘happy’ islands on the earth, but I don’t think you can [achieve sustainability] all over the world.”

Enam is even more pessimistic: “I think as long as fossil fuels are still being used, renewable energy will be backseating.” But Schlögl ends on a positive note. He agrees with the idea that there will be ‘islands’ of sustainability around the world, “but the islands can be pretty big”. The science is already there, he emphasizes. All that’s needed is social change – and that’s something all of us can help with.