Finland: Rare Diseases and Top...
Back
On the rarest day of the year, February 29th, Rare Disease Day was established to raise the awareness of rare diseases. What is a rare disease? The numbers range between one in 1,500 to 1 in 2,500 people, different countries or regions have different benchmarks of what is considered ‘rare’. There’s a difference between rare diseases and orphan diseases: the latter also include neglected diseases that can be widespread, like many tropical diseases, but don’t offer pharmaceutical companies enough profit expectations to produce and sell them. 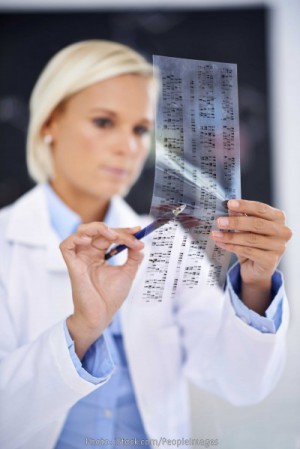 A researcher reading a slide with DNA banding patterns. These patterns are used for paternity tests, in genetic fingerprinting for forensics, and in epidemiological studies like the research on Finnish Heritage Disease. Photo: PeopleImages

Rare diseases often are caused by genetic mutations, some of these appear randomly, others are hereditary. With spontaneous mutations, diagnosis and treatment is often very difficult – if doctors don’t know what they’re dealing with, the most they can do is treating the symptoms. But hopefully, with affordable genome analysis emerging and with genetic engineering methods to produce proteins in the lab, more of these conditions can be tackled in the future. One example of a group of hereditary genetic disorders is the so-called Finnish Heritage Disease, or FHD. In the 1950s, a noticable number of children were born with fatal renal failure in Finnish hospitals. The numbers were startling and the symtoms didn’t fit any known disease. This was the starting point of the systematic description of FHD. In earlier years, children were probably often born at home, so many of these babys never saw a doctor before they died – as a consequence, doctors didn’t know that a group of almost forty genetic diseases had a common cause. Today, geneticists estimate that about one in five ethnic Finns is a carrier of one of the known FHD diseases. But since the majority of these mutations are inherited recessively, these carriers are healthy. Only if two carriers with the same mutation have a child, there’s a 25 percent chance of the child being affected by the disease (see graph below). Nowadays, newborn renal failure can be treated with renal transplants, and the affected children can lead comparatively normal lives. Another FHD is Usher syndrome, associated with vision or hearing loss, and sometimes both. Three FHD cause restricted growth, the actor Billy Barty for instance was affected by cartilage-hair hypoplasia, a FHD, and often played young children early in his career. Other FHD cause mental deficiencies, and some of the metabolic diseases, like the GRACILE syndrome, are still fatal. 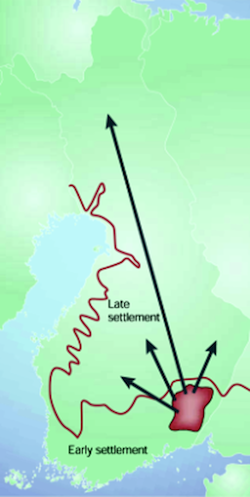 Ethnic Finns setlled initially in East Finnland; they are the most affected by FHD. In the 16th century, small groups of Finns founded remote villages further north, taking the FHD genes with them. Credit: FinFis.org

More children are affected in Eastern and Northern Finnland, Swedish immigrants that came to West Finnland over the centuries, as well as the Sami population in the North, don’t suffer from FHD. Geneticists theorise that some catastrophic event thousands of years ago, or a combination of infectious diseases, crop failure or war, led to a ‘population bottleneck’ that caused a massive loss of genetic variation. This in turn meant that certain mutations suddenly had a higher concentration in the gene pool. What happened much later is called ‘founder effect’, when small groups founded remote villages – leading to even more genetic isolation. Some researchers link the early bottleneck to the Neolithic Revolution: the emergence of agriculture initially led to malnutrition, decline in life expectancy, and to new and widespread infectous diseases. Maybe someday, archeologists can tell us more about what happened in Finnland thousands of years ago. In the years after the initial FHD findings, cases were mostly documented and charted, along with possible treatments. But with the rapidly improving genome analysis in the 1990s, the mutations that lead to these diseases could finally be found. The Finnish pediatrician and molecular biologist Leena Peltonen-Palotie has described 18 FHD diseases. She was the founding chairperson of the Department of Human Genetics at UCLA’s medical school. Later she became Head of Human Genetics at the Wellcome Trust Sanger Institute in Great Britain, and headed research groups at MIT and Harvard. In a Finnish TV-show in 2004, Peltonen-Palotie was named as one of the 100 most important Finns. In the mid-1990s, Aarno Palotie, a geneticist and Peltonen-Palotie’s husband, offered screening tests for two of these diseases to all pregnant women in the Kuopio City Health Center. As a result, his team found 61 carrier mothers. Now the fathers were checked to rule out affected foetuses. Only one father carried a mutation identical to the mother’s. Fortunately, the subsequent prenatal test revealed an unaffected child. Palotie is research director of the Human Genomics Programme at FIMM, the Institute for Molecular Medicine Finland, and project leader of the SISu project, the ‘Sequencing Initiative Suomi’; Suomi being the Finnish name for Finland. 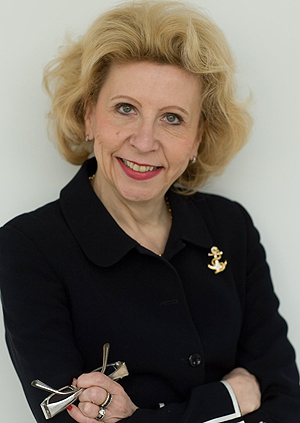 Leena Peltonen-Palotie (1952 – 2010), a famous Finnish geneticists. She became interested in studying medicine at the age of ten when her brother was diagnosed with type 1 diabetes. Photo: Tampere University of Technology

After Palotie’s screening test, Finnish researchers apparently saw no necessity for large-scale population screening programmes. With only about 60 affected children being born every year in the entire country, the problem seemed relatively small, compared to other diseases and syndromes in pediatrics. Furthermore, an increasing number of these children can be treated, and others experience a high quality of life with their impairments. Experts assume that the Finnish genetic homogeneity will diminish in the future due to the ongoing migration to the cities and due to an increased influx of immigrants. However, the loss of genetic variety also has its advantages: Because the Finnish genome is relatively uniform, it’s easier to find and study mutations here than anywhere else, for instance mutations that can cause widespread diseases like diabetes, heart disease or asthma. Leena Peltonen-Palotie has not only studied FHD, she has also discovered the genetic sources for several other diseases, like Marfan syndrome, and also genes that play an important role in the development of multiple sclerosis, schizophrenia, and migraine. Because of their unique gene pool, Finnish researchers have a far greater impact on genetics than would be expected of a population of 5,4 million people. With the Human Genomics Programme, Aarno Palotie also invites researchers from other countries to study various diseases with the help of Finnish genetic data – big data from Finnland to help treat patients all over the world, not just in Finnland. The Rare Disease Day was launched in 2008 by EURORDIS, the European Organisation for Rare Diseases, a non-governmental alliance of patient organizations and individuals active in the field of rare diseases. EURORDIS was founded in 1997 and promotes research on rare diseases and commercial drug development. RDD is always on the last day in February. 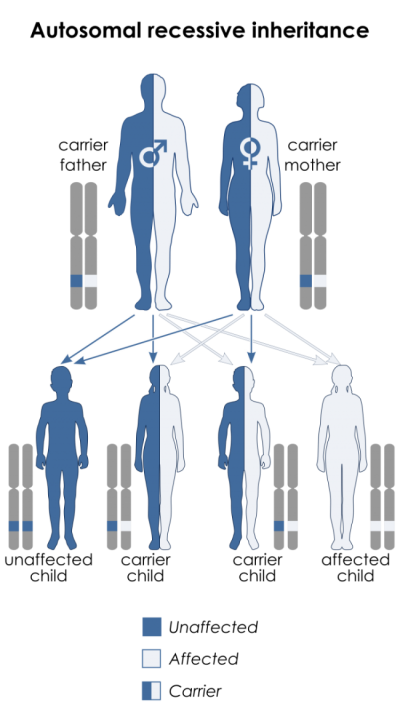 If a mutation is inherited recessively, there’s only a 25 percent chance that a child of two carriers will be affected. Credit: Kashmiri based on work of Domaina, Creative Commons Attribution-Share Alike 3.0 Unported license