Committed to Teaching Science and...
Back

On the beautiful Mainau garden island in Lake Constance where the Closing Panel Discussion of the 2016 Lindau Nobel Laureate Meeting took place, Dan Shechtman gave insights into his long and productive career. After finishing his degree in mechanical engineering at the Technion in Haifa, he couldn’t find a job due to the economic crisis of 1966. So he continued his studies and thought he would find a job after the recession. But then he “fell in love with science” and decided to continue for his PhD – and we know that this was a very wise choice.

But during his initial job hunt in the mid-sixties, the Technion, Israel’s prestigious Institute of Technology, didn’t encourage its students to start their own businesses. “The spirit of the Technion told us: you will be so good that when you graduate, everybody will want to hire you,” Shechtman recounts in the Mainau panel discussion. “And I said: ‘Oh, that is very wonderful, but what if I want to open my own technology business? How do I do that?'” The Technion didn’t teach that. So when he became a full professor at the very same Technion 1986, after his discoveries of quasicrystals that later won him the Nobel Prize, he told himself: “Now I can do whatever I want,” and he immediately started planning the course ‘Technological Entrepreneurship’, a term he invented. Only one year later, he offered his first course, it’s now in its 29th year. When Shechtman announced this course for the first time, 800 students came to attend, but the hall was only approved for 600 people – “the largest class of the Technion ever”, as he remembers. 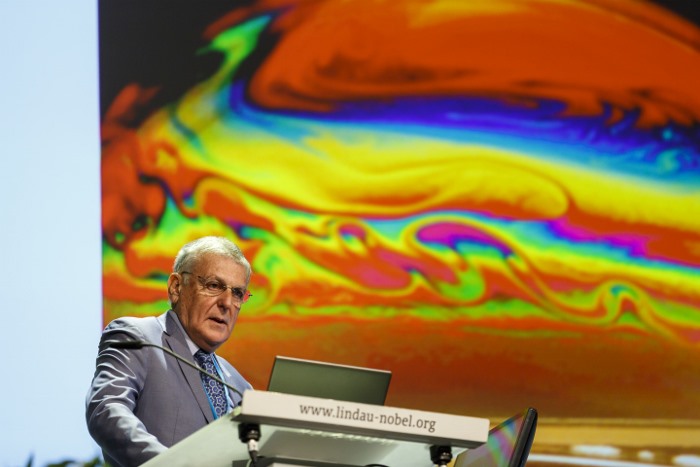 Today, Israel has more companies quoted on the American exchange platform NASDAQ than any other country outside the US except China, and most major high-tech companies have research and development departments in Israel. How come such a small country with only about 7 million inhabitants produces more start-up companies than large stable nations like Japan, India, Canada and the United Kingdom, asks the book ‘Start-Up Nation’. The authors see high levels of immigration and Israel’s mandatory military service as two contributing factors. When approached on this subject, Shechtman remarks: “I don’t claim that I’m the father of the start-up nation, but I contributed to it. (…) By now I have very many engineers and scientists in my country, more than 10,000, that took my class and had the chip of entrepreneurship embedded in their minds.”

To these classes he would invite three groups of speakers: successful entrepreneurs, struggling entrepreneurs, and professionals like lawyers, accountants, patent officers and marketing experts: the classic start-up advice. And although the word ‘start-up’ wasn’t used when his course started, ‘technological entrepreneurship’ was already tailored to the needs of future technology companies. Besides practical advice, the students also learn about failure. They would hear that out of ten newly established technology companies, one is a big success, two struggle, and seven will fail. And they learn that failure is Okay, that next time they’ll be much more successful. Some of Shechtman’s many lectures even have the title ‘Failure? OK, Start Again!’

In an interview with The Guardian, Dan Shechtman says how he feels “like a missionary to promote education and science and technological entrepreneurship.” So besides ‘real science’ and technological entrepreneurship, the Nobel laureate is passionate about science education because “every society needs more engineers and scientists, and biologists and computer experts. These are people that open start-ups and develop economies,” as he explains in the Mainau discussion. However, he sees a widespread phenomenon that “young people don’t want to become any of these, they want to be managers and lawyers and accountants,” which is fine in his opinion, but these professions don’t produce anything. “And start-up companies, high-tech companies, small companies that will grow – this will lead us to a better future,” meaning more prosperity for larger parts of the world population.

Shechtman’s opening statement at the panel discussion The Future of Education in Sciences was: “The most important resource of any country, and the most sustainable one, is human ingenuity. And we have to foster it, and we have to develop it as early as possible” – a strong sentence, and he acts upon it. In 2012, he initiated a programme in his hometown Haifa to educate kindergarten teachers in scientific topics. They in turn were expected to teach science to kindergarten children. But “part of it was lost in translation,” Shechtman says in hindsight. Some teachers couldn’t really understand what they were supposed to teach, so the teaching didn’t work very well.

Dan Shechtman drew two conclusions: he wanted to teach young children more directly, but he also wanted to reach a larger audience. So on the one hand, he helped a programme to install ‘Science Kindergartens’ in Israel: the first opened in October 2015. On the other hand, he contacted the national educational television channel and proposed a TV sience show for young children in order to reach a larger audience. The show is called ‘Being a Scientist with Prof. Dan’, in Hebrew this sentence rhymes.

The TV channel built a small laboratory in a TV studio, and Prof. Dan has a young actress as his assistant. For every 15-minute show, three children aged six are invited to discuss science topic with the adults: How are things measured? What is matter? How is matter built? How does light interact with matter? What are fields – gravitational fields and magnetic fields? You can watch these shows on youtube, but since they’re tagged in Hebrew letters, I recommend to use these links (show on matter, fields, atoms and crystals, and measuring). It’s a delight to see how passionately Prof. Dan and his assistant explain scientific topics, and how much fun the children have in taking part.

This year Dan Shechtman talked about ‘The Beauty and Science of Soap Bubbles’ in Lindau. This inspiring lecture is supposed to be the starting point for a series on ‘Science and Aesthetics’ that he’s planning. In 2017, he will give a Lindau lecture about crystallography – the topic for which he was awarded the Nobel Prize in Chemistry in 2011.