Boosting Photosynthesis to Meet Rising...
Back

The issue of food is perhaps somewhat overlooked among the many challenges faced by mankind but the truth is that world demand is steadily increasing and by 2050, could be almost twice that of 2005. More alarmingly, based on the calculations of the Food and Agriculture Organization of the United Nations, if things continue as they are, we are not going to meet this increased demand. Will upgrading the basic chemical reaction underlying the growth of all plants allow us to meet the challenge?

Several causes underlie the expected need for more food. First and foremost, it is simply a consequence of there being more of us: by 2050 there may be over two billion more humans living on planet earth. A further reason is increasing living standards across the globe; as these are rising, so too is the demand for better quality food (and more of it). Further, the last decade has witnessed an explosion in the use of grain to make biofuel in developed countries, diverting it from its potential use as a foodstuff.  So, how are we to ramp up food production and meet this shortfall? And further, how can we do it in a sustainable way that does not exacerbate already existing problems such as water shortage and climate change? 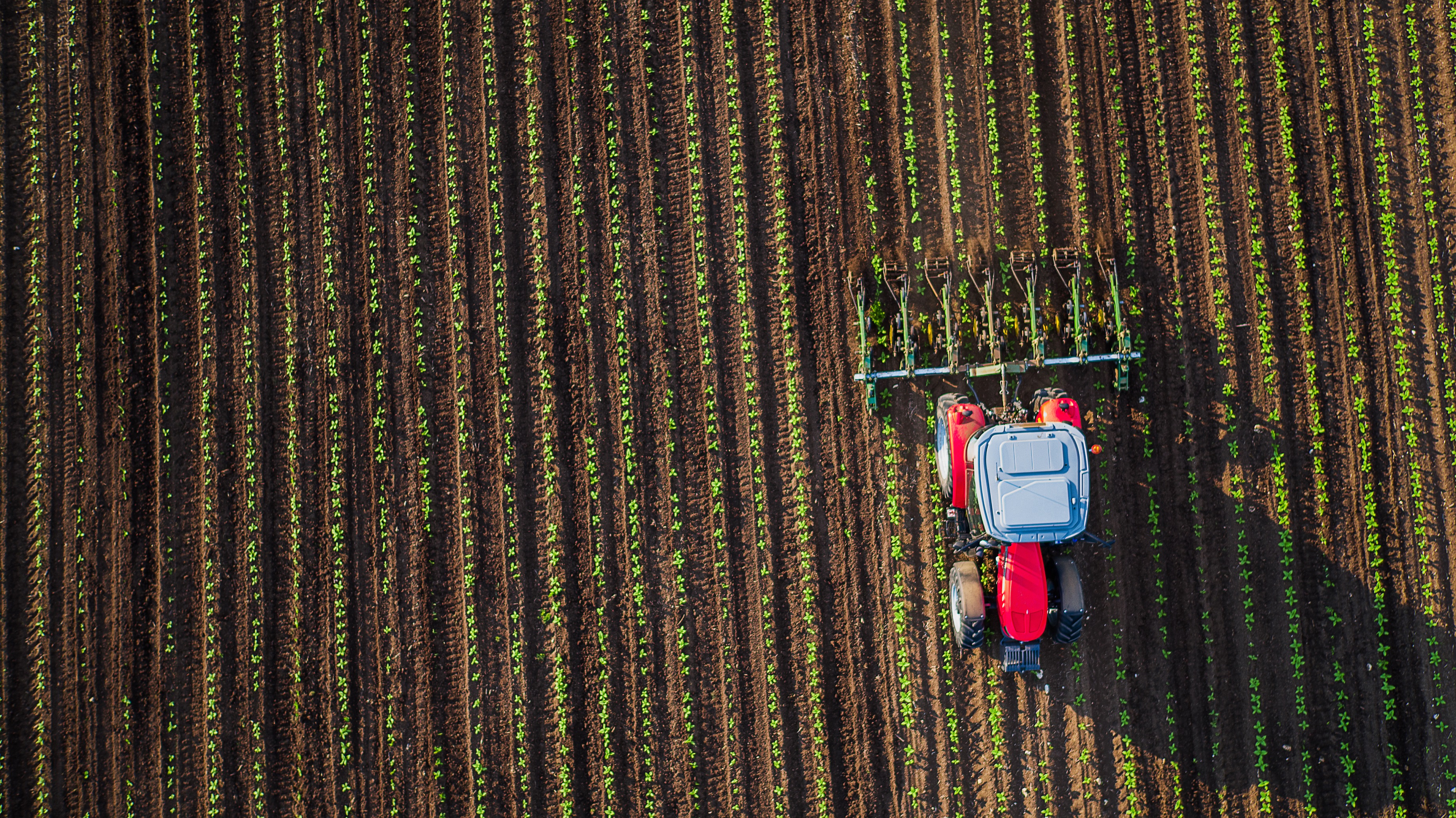 Although agricultural efficiency has increased significantly over the course of the last decades, evidence suggests that crop yields are now plateauing. Novel solutions are urgently needed to meet the world’s increasing demand for food. Photo: valio84sl/iStock.com

The central strategies that have underpinned decades of increasing crop yield involve either increasing the amount of land used for agriculture, or maximizing the amount of food that can be grown on the land already in use. However, many experts in the field believe that conventional strategies based on efficient use of water and fertilizers as well as other approaches have now been exhausted. Indeed, the yield of some of the main staples of the human diet worldwide such as rice and wheat has plateaued in recent years. What are the remaining options? This question among others was also debated by the participants in a discussion which took place at the 63rd Lindau Nobel Laureate Meeting in 2013.

Harvesting the power of transgenic technology, which means taking a gene responsible for a given trait from one organism and transferring it to a second species, could be a potential solution to the problem. However, this approach remains highly controversial, not least because common strategies include the engineering of genetically modified (GM) variants that harbour genes providing resistance to harsh environmental conditions, disease and, crucially, to antibiotics. A major concern related to this approach is that these genes might be easily transferred to other pest species, resulting in “super weeds” that cannot be eradicated. However, another distinct strategy has also taken shape in the last 20 years: one which seeks not to make plants hardier, but rather to boost the basic process underlying all plant growth.

The evolution of photosynthesis, the process by which plants convert carbon dioxide into sugar and water in the presence of sunlight, was of crucial importance to the development of life on earth. Not surprisingly, several Nobel Prizes have been awarded to scientists whose work has helped to characterise the factors involved and to unravel the basic mechanism of the reaction. Most directly, the Nobel Prize in Chemistry 1988 was jointly awarded to Hartmut Michel, Robert Huber, and Johannes Deisenhofer “for the determination of the three-dimensional structure of a photosynthetic reaction centre”. Now, this chemical reaction, which has done so much to promote life on this planet and the evolution of ever more complex lifeforms, may hold the key to ensuring that our increasing needs for food are met. It has been proposed that if photosynthesis, and thus the production of sugar, can be fine-tuned and upgraded, then this will lead to bigger plants, bigger yields and ultimately, more food. 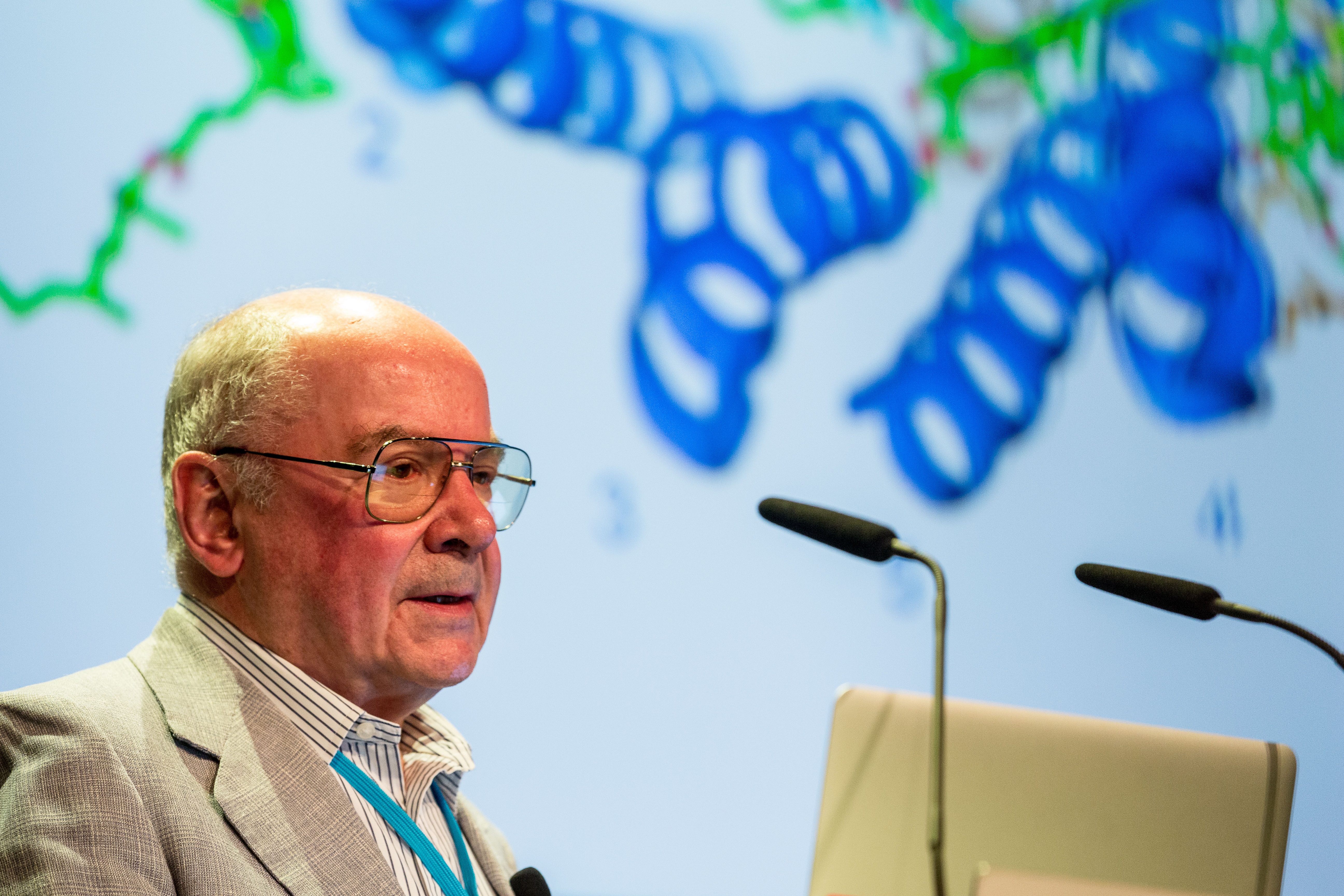 Johann Deisenhofer during his 2016 Lindau Lecture. We are looking forward to his lecture at #LiNo17! Photo: Christian Flemming/LNLM

It may come as a surprise, but the chemical reaction that has been evolving over the last 3.5 billion years and which underlies all life on earth is actually relatively inefficient in several aspects. When we talk about photosynthetic efficiency what we are actually talking about is the percentage of light energy that is finally converted into chemical energy in the form of glucose. The inefficiency is already pre-set by the fact that only a fraction of the spectrum of sunlight is actually used for photosynthesis. Chlorophyll, the green pigment that gives leaves their colour, is most efficient at capturing the light that we can see – the red and blue light which makes up less than half of the total light that reaches our planet from the sun. The inefficiency is compounded by the fact that plants cannot use all of the energy contained in the sunlight that they absorb. To avoid damage to the components of the photosynthetic reaction and to the organism as a whole, the excess energy is converted to heat and is dissipated from the plant. This important protective mechanism is termed non-photochemical quenching (more of which later).

The strategies aimed at increasing photosynthetic efficiency take many forms. In fact, one of the critical enzymes required for photosynthesis, RuBisCo (short for ribulose-1,5-bisphosphate carboxylase/oxygenase) is itself rather slow and inefficient. Thus, several laboratories worldwide are attempting to engineer versions of the protein that harbour more efficient enzymatic activity. The concentration of carbon dioxide is another important factor in photosynthesis. Thus, further strategies to optimise photosynthesis include simply increasing the local concentration of carbon dioxide in the immediate vicinity of plants, or improving the ability of plants to take it up and use it.

Until recently, however, the feasibility of all of these strategies was based mainly on preliminary evidence and in some cases the ideas remained just that, ideas. The overall concept of enhancing photosynthesis, the process ultimately underlying all plant growth, is undeniably attractive – but will it really work? 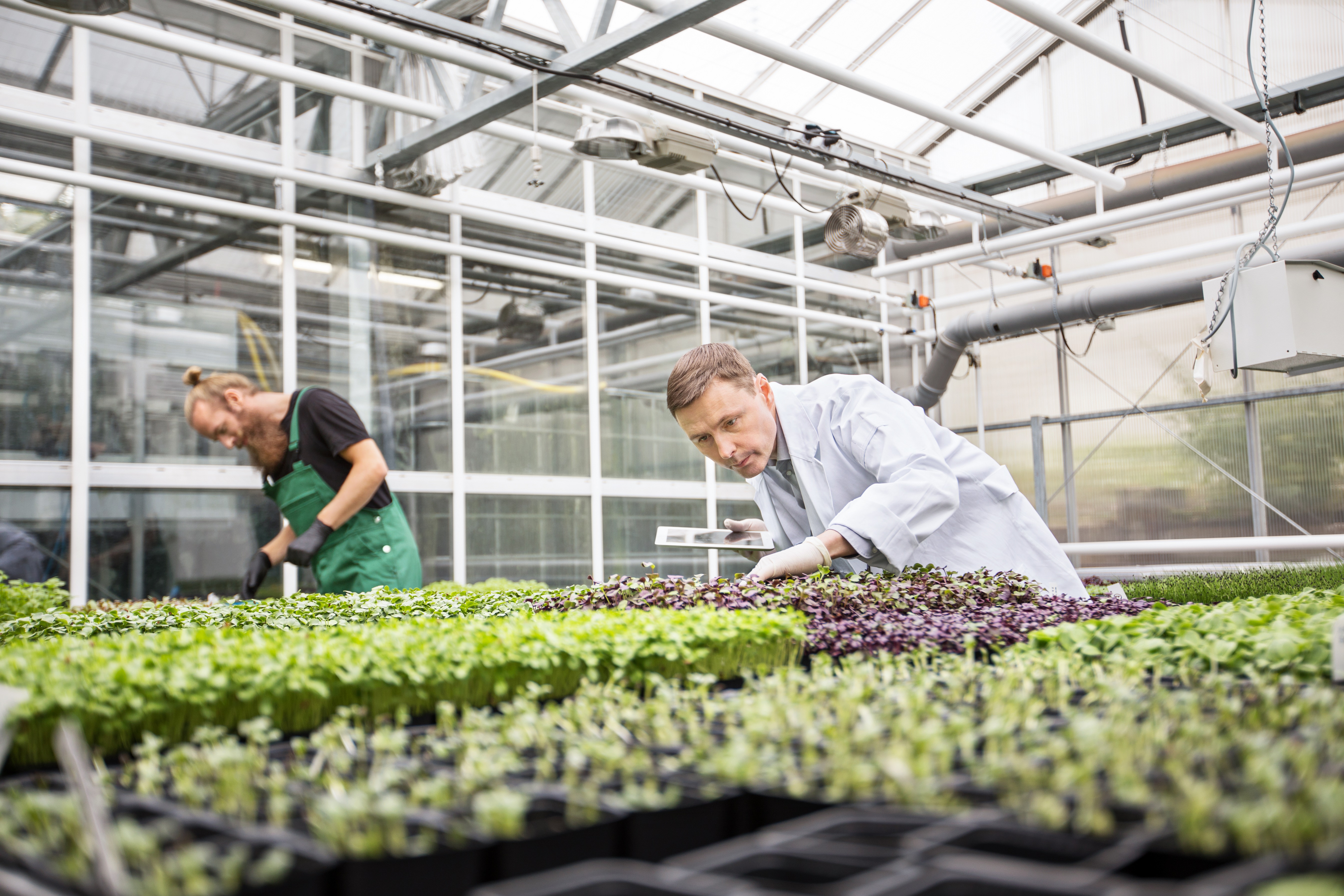 Decades of research has gone into understanding the mechanism of photosynthesis. These insights are now being utilised by researchers who, by boosting and upgrading the efficiency of the reaction, hope to increase crop yields and ensure the future of our food supply. Photo: alvarez/iStock.com

Then, in the autumn of last year, arrived a study which goes some distance to demonstrating that the promise of boosting photosynthesis can be translated into tangible gains in crop yield, in this case tobacco. The authors, a team led by Krishna K. Niyogi and Stephen P. Long, and comprising researchers based in the US, UK and Poland, took a rigorously systematic approach and started by simulating the chemical process of photosynthesis in its entirety in order to identify potential steps where intervention may optimise the reaction. The scientists soon realised that the fact that plants absorb much more energy from the sun than they can use may hold the answer. In response to harsh direct sunlight, plants activate non-photochemical quenching immediately to protect themselves and their photosynthetic enzymes. However, when it comes to switching the mechanism off again, they are not as efficient. It can take as long as 30 minutes, time during which photosynthetic activity is dampened. The authors calculated that under conditions when light is fluctuating, overall yield could be decreased by as much as 30 percent. To try and tackle this question, and to promote faster resumption of photosynthesis upon exposure to sunlight, the team led by Niyogi and Long genetically engineered tobacco to express higher amounts of three key proteins that speed up the resumption of photosynthesis in conditions of fluctuating light. In unprecedented results, the genetically modified plants gave yields that were on average 15 percent higher than unmodified tobacco. The researchers are now applying their approach to rice and other important food crops.

Scientists working at Rothamsted Research in the UK, the world’s oldest agricultural research institute, also recently claimed to have made significant breakthroughs in boosting photosynthesis to improve crop yield. They have taken a different approach to improving the efficiency of photosynthesis: they increased the expression of the enzyme Sedoheptulose-1,7-bisphosphatase (SBPase). Their initial trials under greenhouse conditions showed significant increases in wheat yield and researchers are now testing whether these will also be observed in wheat grown in the field.

Decades of research, much of it crowned with Nobel Prizes, has gone into understanding the players and mechanisms involved in photosynthesis. With good reason: understanding how photosynthesis works may secure the future of our food supply. The recent successes with translating basic insights into tangible increases in crop yield suggest that we may soon begin to harvest the fruits of this approach. Watch this space.