On 13 – 16 November 2018 metrologists and policy makers from 60 countries around the world gathered at the General Conference on Weights and Measures (CGPM) in Versailles, France, for their most important quadrennial meeting since the International System of Units (Sys­tème International, or SI) was instigated in 1960. This was because during the meeting they would be voting on whether to adopt sweep­ing changes to the SI system.

Before the vote, 1997 Nobel Prize in Physics Laureate William D. Phillips from the National Institute of Standards and Technology (NIST), USA, had a message for the delegates: “Today, in the 21st Century, the unit of mass is an artefact, a piece of metal made in the 19th Century, based on an object made in the 18th Century – this is scandalous,” he said. “This scandalous situation must be fixed.” And it was.

On 20 May 2019 – World Metrology Day – the new SI came into force. The definitions for all seven SI base units (the second, metre, kilogram, ampere, kelvin, mole and candela) are now linked to laws of physics. But what does this mean and is this the end of the story for the SI?

In his Online Science Days 2020 Conversation A New Measure: the Revolutionary Reform of the Metric System Phillips used the kilogram as an example to explain the new SI revolution in his inimitably engaging style.

Wearing white gloves, he held a replica of the International Prototype Kilogram (affectionately nicknamed ‘Le Grand K’) – a 39 mm tall cylinder of platinum alloy that was the one and only true kilogram against which all others are measured for 130 years up to 2019 – to emphasise the absurdity of defining a unit by an object: “If this were the kilogram, and if I were to leave a fingerprint on it, that would change the mass of this thing. But, by definition, it cannot change the mass of this thing,” he explained. “And so if I leave a fingerprint on it, you lose weight.”

Instead, in the new SI, the kilogram is defined in terms of a fixed value of Planck’s constant. Planck’s constant, h, relates the energy E of one quan­tum of electromagnetic radiation to its frequency ν by the famous formula E = hν, which is in turn linked to mass via the even more famous equation E = mc2. “If we can measure the frequency of light, and (…) this is something we know how to do really well; and if we’ve defined the speed of light, which we already did in 1983 when we defined what the metre was; and if we now take one more step and define Planck’s constant, that means that we’ve got a definition of mass.”

With similar redefinitions for the ampere, mole and kelvin also part of the new SI, we finally have a system of units fit for the 21st century. Outside metrology, this revolution has had little practical impact, given the sizes of the units themselves have remained unchanged. What has changed is that scientists are now able to measure them to the same very high level of precision at any place or time, and on any scale. Phillips said: “We’ve got a system of units that is good ‘for all times, for all peoples’,” echoing the law of 1799 that initiated the first metric system in France.

A Timeless Definition of Time? 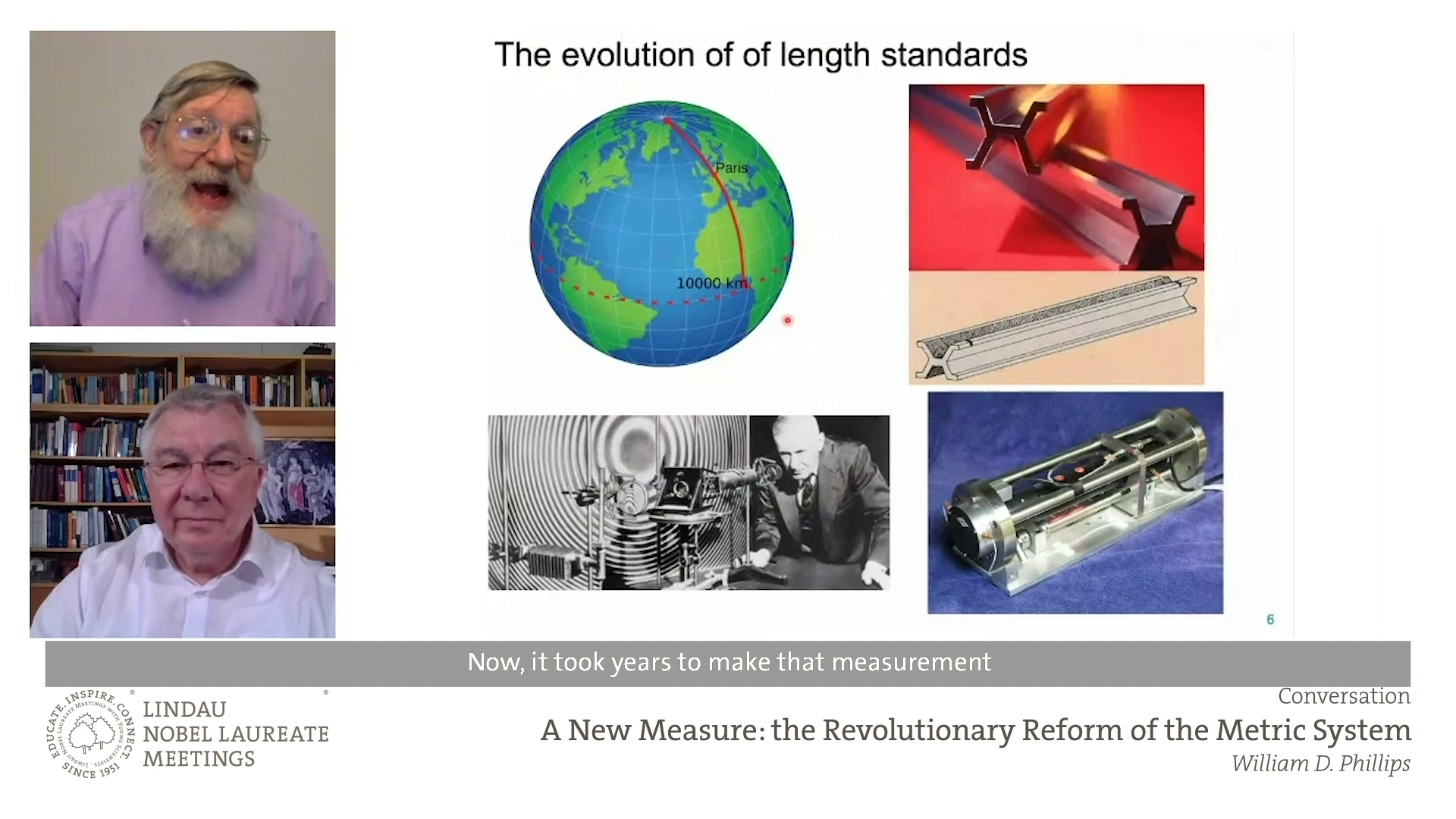 But could the new SI be any better? Rainer Blatt, University of Innsbruck professor and member of the Council for the Lindau Nobel Laureate Meetings, threw a spanner in the works: “There is at least one unit, the second, whose definition is still linked to an artefact, to caesium.”

Currently a second is defined as 9,192,631,770 oscillations of a caesium-133 atom. “Even though time or frequency is the thing that we can measure most precisely of any physical quantity, we’re now limited by the very definition of time itself – by how well we can actually measure the frequency of that caesium atom,” continued Phillips.

Blatt went on to explain that experiments at NIST are able to derive the second with unprecedented accuracy – 2 x 10-18 – a thousand times better than the caesium-133 definition, with even more precise measurements planned or being carried out around the world.

Yet even these extremely precise measurements could have a flaw, as all of them are based around an atomic transition: “Of course, we believe that atoms do not change their frequencies in time, but that’s a belief and nobody knows that precisely,” added Blatt.

“It’s clear that it’s almost time for us to redefine what we mean by time,” concluded Phillips. “But even after we do that we may find in the future there’s something better – so it looks like, in the end, time is the one quantity that’s going to defy a timeless definition.”