The Original Dark Side: Why...
Back

Nobel Laureate Adam Riess had a busy third day at the 69th Lindau Nobel Laureate Meeting, presenting a lecture, debating in a panel discussion and meeting for an Open Exchange with young scientists. He was in-demand not only because he is visiting the Lindau Meetings for the first time, but also because his work tackles cosmological questions we have all asked at some point in our lives. When was the universe created? How will it end? And what is it made of?

Riess’ Nobel-awarded research, shared with Saul Perlmutter and Brian Schmidt, provided strong evidence for an answer to the second question. To get there, the researchers focused on measurements of one of the most important parameters in cosmology – the Hubble constant. The Hubble constant is needed to estimate the size and age of the universe. It gives the rate at which the universe is expanding today from the Big Bang.

Scientists already knew the Hubble constant was not constant (in time at least, it is however the same and therefore constant throughout space). In the distant past, the universe’s expansion rate was much larger, and then it shrank as the universe expanded.

It was therefore a complete surprise when Riess and Schmidt, and Perlmutter independently, revealed that the universe’s expansion is actually accelerating and therefore that its ultimate fate is to keep on expanding forever. “This was tremendously exciting, shocking, disturbing, revolutionary… any adjective you can throw at it,” he recalled. “But it doesn’t really answer the big question: why is the universe’s expansion accelerating?”

Riess’ current work may shed light on this question, and again studies revolve around the Hubble constant. When Edwin Hubble introduced his eponymous constant 90 years ago, his calculations yielded what we now know was a gross overestimate of H0 = 500 km/s/Mpc. By the 1960s it had shrunk to around 100 km/s/Mpc and it continued to shrink further through the following decades.

Recently, Riess and colleagues from the SH0ES (Supernovae H0 for the Equation of State) collaboration measured the Hubble constant to be 74 km/s/Mpc, with a precision of 1.9%.

To get to such a level of accuracy, Riess explained that his team had to build a strong ‘cosmic distance ladder’. This entailed measuring accurate distances to nearby galaxies and then moving to galaxies farther and farther away. For relatively nearby galaxies, the team used standard candles called Cepheid variables, common stars that pulsate at predictable rates that indicate their intrinsic brightness. For those farther away, they could also use much brighter but rarer cosmic yardsticks: exploding stars called Type Ia supernovae. By comparing these distances to measurements of an entire galaxy’s light, they could then calculate how fast the cosmos is expanding: the Hubble constant.

Yet despite its accuracy, this value surprisingly doesn’t match with the one derived from another key technique for calculating the universe’s expansion rate. ESA’s Planck satellite, which maps the cosmic microwave background – the relic afterglow from the Big Bang – was used by researchers including Nobel Laureate George Smoot to calculate how fast the universe was expanding when it was just 380,000 years old. They extrapolated this value forward to today and came to a Hubble constant value of 67 km/s/Mpc.

This mismatch presents a big problem for the current model of the universe, known as ΛCDM.  “If we have reached a point of confirmation of this discrepancy, then we have to imagine new physics in ΛCDM,” Riess said.

Riess only hinted at what this new physics could be during his lecture, making the subsequent panel discussion (ominously titled ‘The Dark Side of the Universe’) in which some of these possibilities were explored all the more eagerly anticipated. 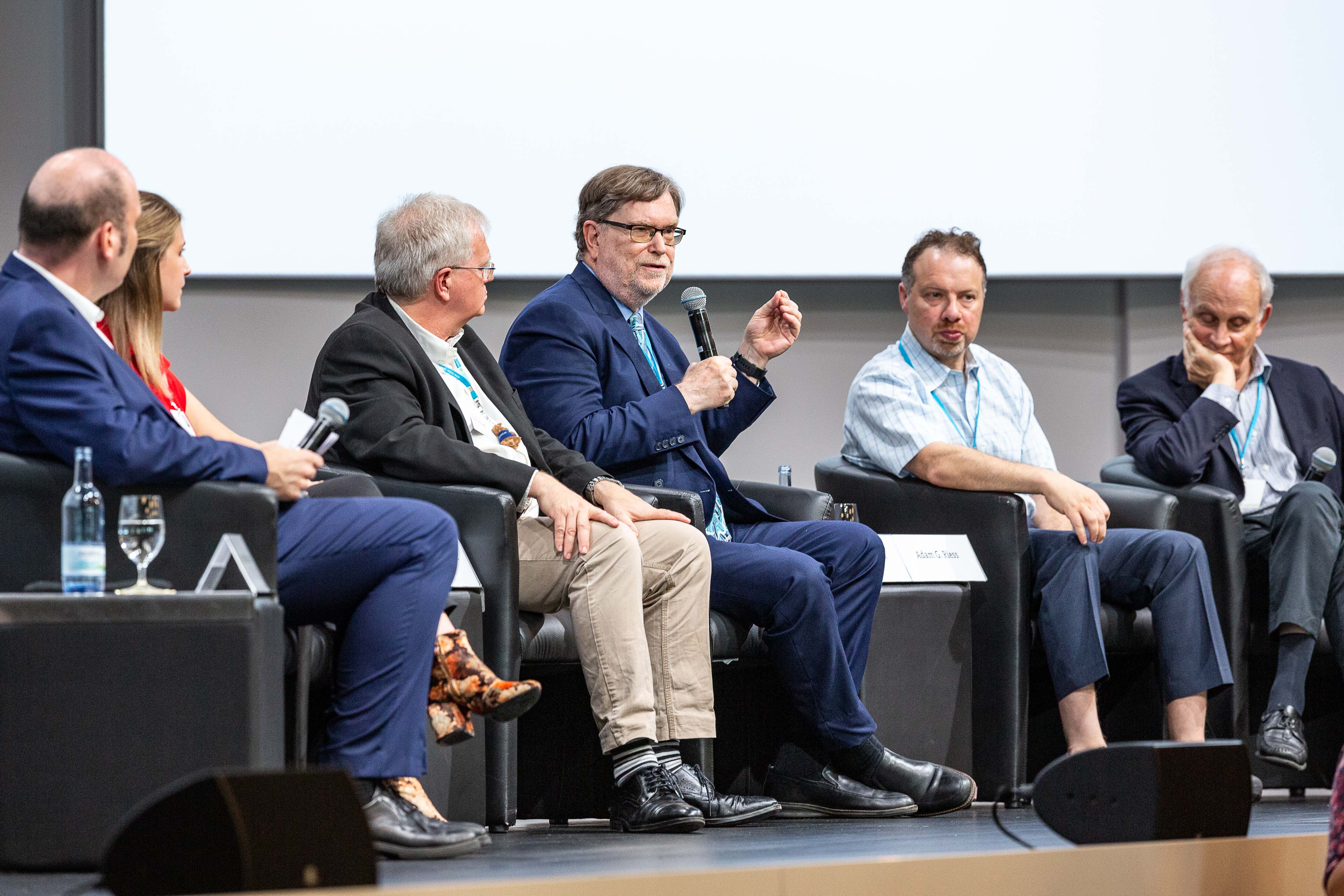 The discussion focused exclusively on dark matter and dark energy, that together are thought to make up 95% of the universe. Dark energy is perhaps the most mysterious of the two. It is an unknown phenomenon expanding space everywhere and making the universe balloon at an ever-faster rate. In 1997, Schmidt and Riess invoked dark energy to help explain their results: “We knew the only easy way to make the universe accelerate was some form of what would eventually be called dark energy, commonly referred to as the cosmological constant,” Schmidt said.

But the discovery of the accelerating universe allowed a cosmological constant to find favour once again as a way to make ΛCDM fit with what astronomers were seeing. Most importantly, adding a cosmological constant essentially has an anti-gravity effect on the universe, allowing it to push itself apart when it should be slowing down.

What this anti-gravity effect is remains a complete mystery. At least, a mystery to most: “I really don’t like the term dark energy,” said Nobel Laureate David Gross who, with Frank Wilczek, and David Politzer, working independently, was awarded the 2004 Nobel Prize in Physics for building a mathematical framework that came to be known as quantum chromodynamics. “It isn’t dark, it isn’t mysterious – it’s the only form of energy and pressure that looks the same to all observers.” 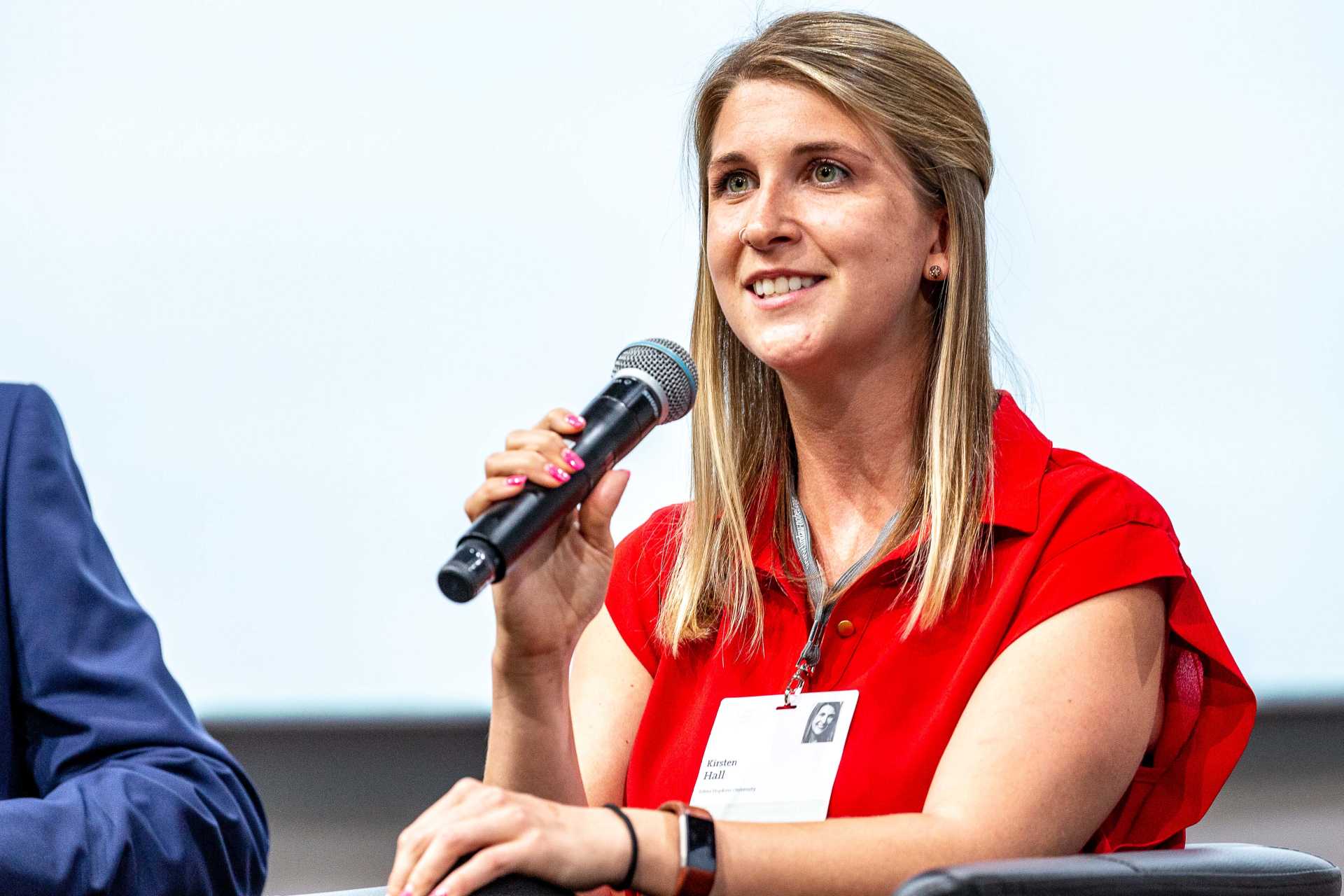 While dark energy is expanding space everywhere, dark matter – the second mystery – has an opposite binding effect on matter in the universe. It is an invisible substance forming a universal cosmic web. This cosmic web is thought to help form galaxies and prevent them from spinning apart.

Like Gross on dark energy, Riess was keen to downplay dark matter’s dark credentials: “One of my favourite observations is of the Bullet Cluster where you see two clusters of galaxies pass through each other in a collision,” he said. “Luminous matter is shocked and heated and left behind a little bit, and the dark matter separates and moves on, and you can actually see it.” But he added: “Our current descriptions of dark matter and dark energy are very phenomenological… that’s not a complete description of their physics.”

So, although these two dark constituents of the universe may not be as dark as we thought, there is still an awful lot to learn about them – a good reason for young scientists attending the 2019 Nobel Lindau Meeting to illuminate the dark side of the universe.