Sketches of Science
Back

When Nobel Laureates come to Lindau, photographer Volker Steger presents each with a surprise task. One by one, he brings them to a desk with a blank white posterboard and a queue of chubby, colourful wax crayons. Then Steger asks: For what did you get your Nobel Prize? 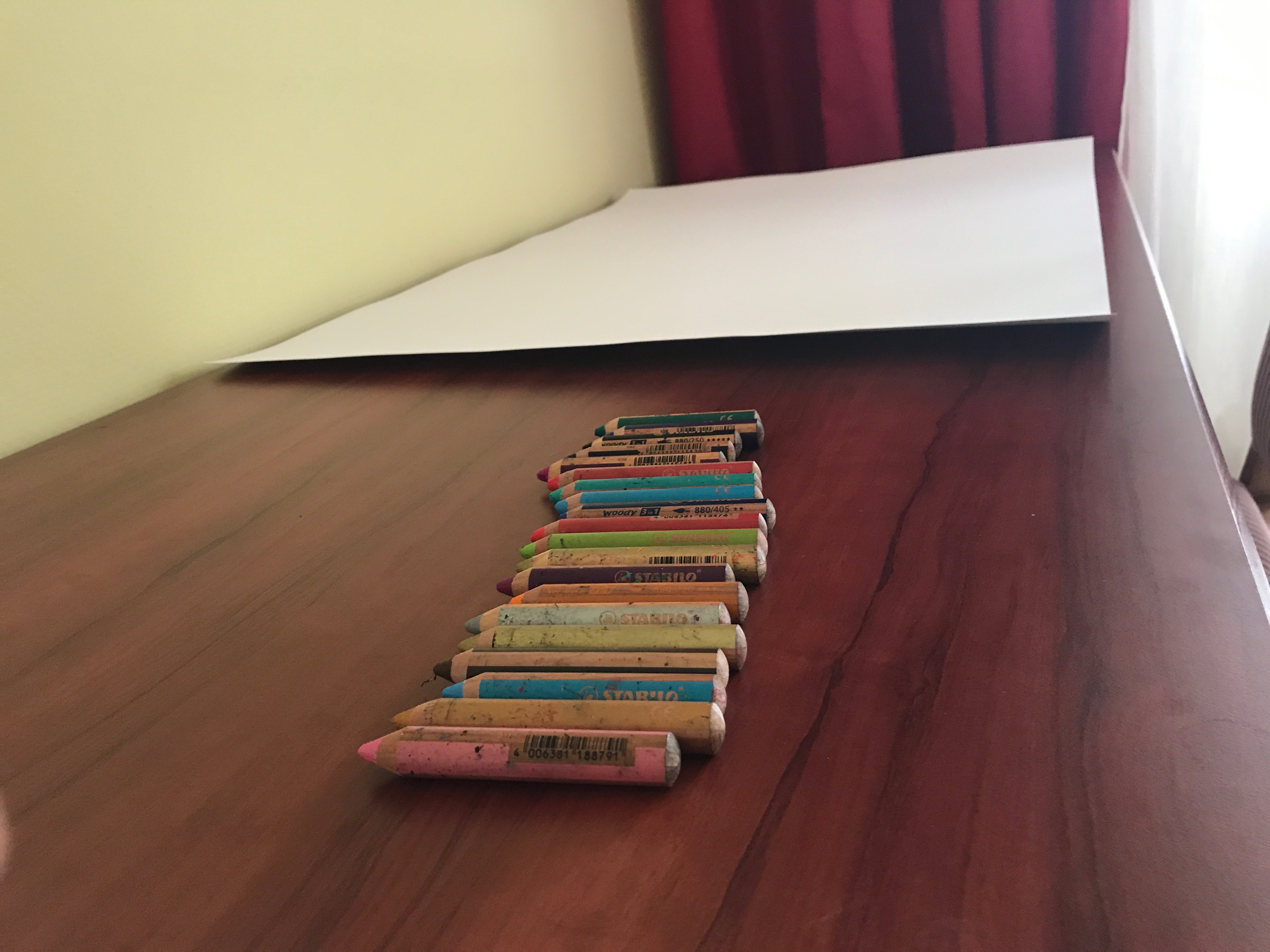 Each laureate sketches his or her answer, following the only guidelines to make the sketch big and use multiple colors. After finishing and signing the picture, Steger photographs each laureate with his or her drawing.  The whole process takes about 20 minutes.

This year he photographed three laureates: Tomas Lindahl, Bernard L. Feringa, and Jean-Pierre Sauvage. I accompanied Steger to his photo shoot with Sauvage at the Hotel Bad Schachen on Wednesday afternoon. Once Steger presented his challenge, we left Sauvage alone with the paper and crayons, listening for several minutes from the hallway to crayons clicking on the desk, a sound similar to that of chalk on a chalkboard.

Sauvage emerged from the room smiling and ready to explain each of his drawing’s three sections: the synthesis of a molecule with two interlocking rings called a [2]catenane, the synthesis of a more complicated molecular trefoil knot, and the contraction and expansion of a molecular muscle. Steger and I whisked Sauvage down the hall to a makeshift photo studio to continue the explanation.

Between shutter clicks, Steger asked Sauvage to demonstrate the molecular motion with his hands. I passed Sauvage a stool so he could sit down and prop his sketch against his leg, leaving his hands free to trace the twists of molecular knots. 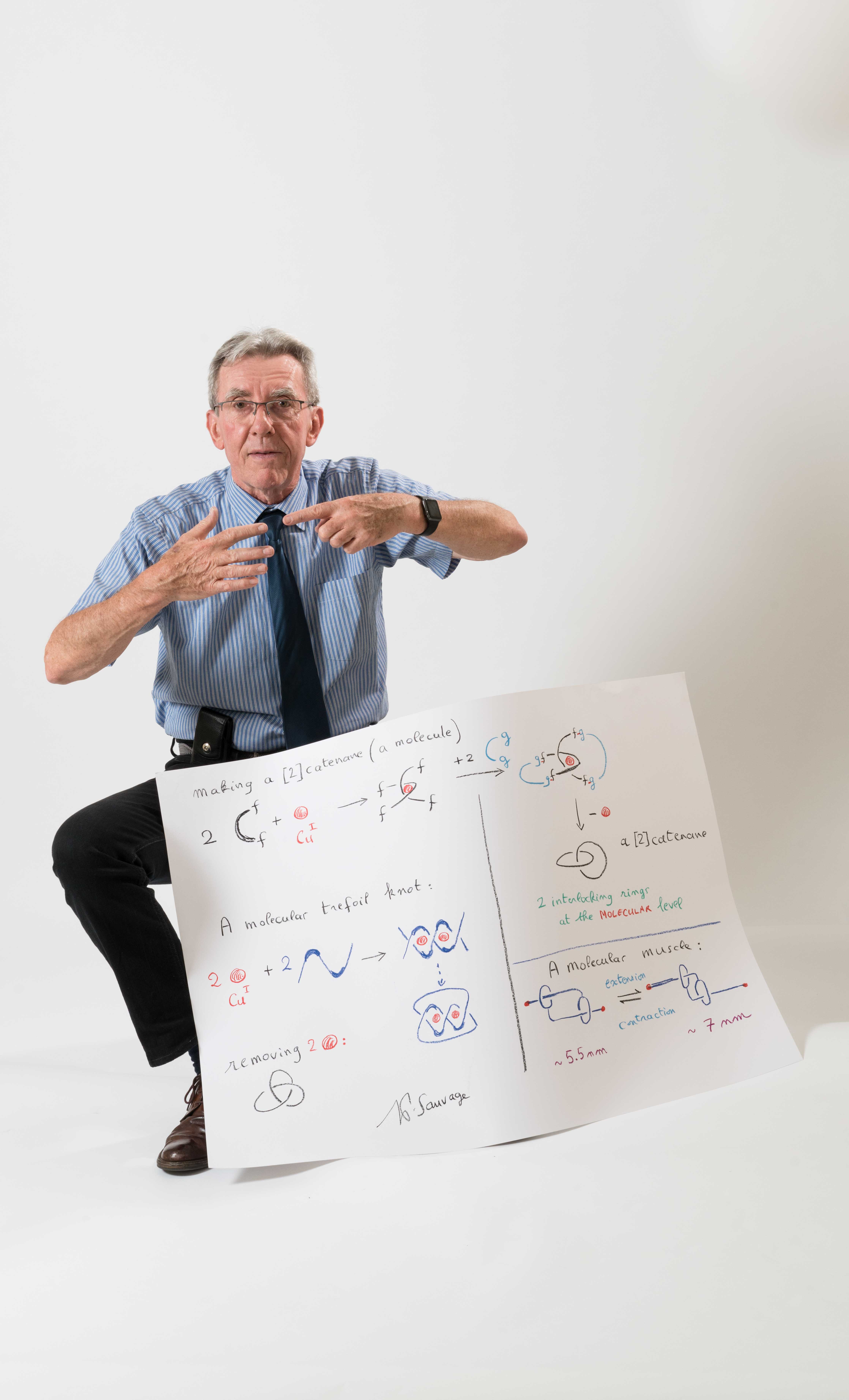 In contrast to traditional posed portraits where a twinkling eye or smile hints at someone’s personality, the physicality in Steger’s portraits directly connects each laureate to his or her intellectual work. When Steger first imagined this project, titled Sketches of Science, he says: “I wanted to learn about each person and their work at the same time in a playful, fun way.” The idea worked right away.

In his photo, Sir Harold W. Kroto pretends to kick a buckyball colored like a soccer ball. When Anthony J. Leggett wanted to twist his arms to show the atomic arrangement that allows for superfluidity, he asked Steger to tape the sketch to his body.

Some laureates prefer words to pictures, diagrams and physical demonstration. Robert F. Curl, Jr. filled two sheets of paper with the story of his discovery, quoting his co-laureates and sketching diagrams of his experiments. Roald Hoffmann filled most of his posterboard with a poem titled “Orbitals and Sex.”

The sketches remain in Lindau under the care of the Foundation Lindau Nobel Laureate Meetings, and they may eventually be archived at the Nobel Museum in Sweden. All of the project’s photographs can be viewed in a gallery and downloaded as an e-book from the Lindau Mediatheque. The e-book also contains Steger’s notes from each shoot, revealing on the stories behind the sketches. 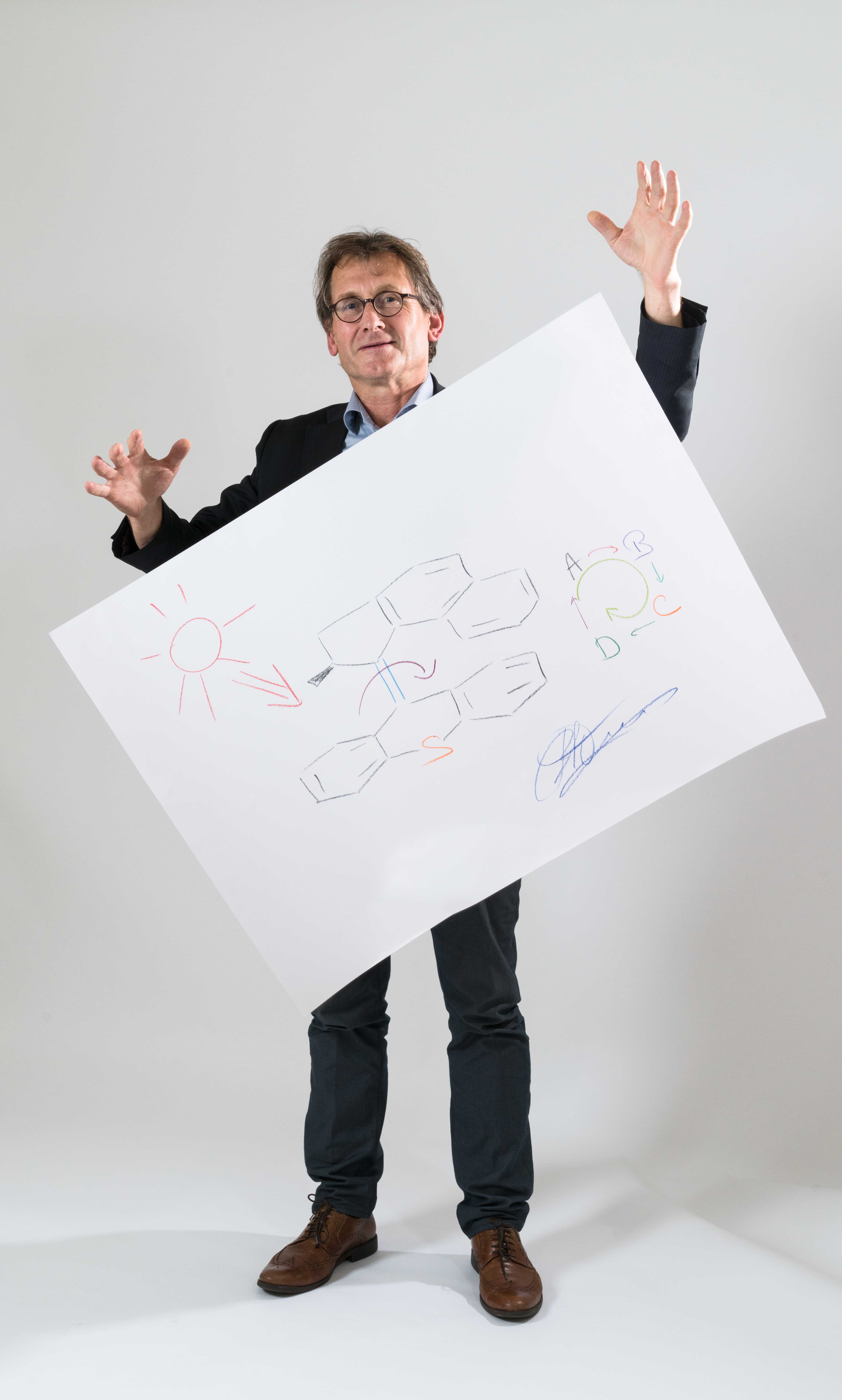 Sir Martin J. Evans’ second sketch – a mouse – pays homage to the lab animals needed for his Nobel-winning research. Martinus J. G. Veltman depicted a scientist as a person climbing a mountain just to see what’s on the other side. And Leon M. Lederman drew Nobel Laureates having a party, with a lady joining the group, hearts filling her speech bubble. “As I am later told by another laureate,” Steger wrote, “this is just what happened to Leon Lederman after he won his Nobel Prize!”

Over the past eight years, Steger has photographed almost 100 Laureates. The collection has been exhibited around Germany, and in Japan, Kuala Lumpur, and Russia.  It will travel next to Australia for an exhibition from March to November 2018.

When Steger started this project, he had one question for himself: “Is there something that all the laureates have in common?” Now that Sketches of Science is nearing its end, he has an answer: “Yes – they all have a Nobel Prize and that’s it. They are a very diverse group of personalities.”