Resistant Bacteria vs. Antibiotics: A...
Back

Antibiotics are an integral part of today’s medicine, not only to treat a strep throat or an ear infection – they also play a huge role in routine operations like appendecotomies or cecareans, and they are indispensable as co-treatment for many chemotherapies.

If you take an antibiotic today, it has most probably been developed and approved of in the last century. And since “bacteria want to live, and they are cleverer than us,” as Nobel laureate Ada Yonath describes them succinctly, many pathogens have become resistant to these common drugs. In September 2017, the World Health Organization (WHO) published an urgent appeal to increase funding for research into new antibiotics: not enough new drugs are in the ‘pipeline’ to combat the growing problem of multi-resistant strains. Currently, an estimated number of 700,000 patients die from infections with these strains every year – and this death toll might rise.

The WHO and other experts are especially concerned about multi-resistant tuberculosis that causes about 250,000 deaths per year, and less than half of all patients receive the necessary treatment that can take up to 20 months. The problem is that disrupted treatment inevitably leads to more resistances. Another very worrisome development is the emergence of multi-resistant Neisseria strains that cause the STD gonorrhoea. Neisseria gonorrhoeae are gram-negative bacteria, meaning that their surface is not coloured by gram staining. This resilient surface is also the reason why it is hard to treat gonorrhoea infections in the first place, even without resistances. Only this year, there have been several outbreaks of this multi-resistant variant around the world.

Antibiotic resistance tests: the bacteria in the culture on the left are sensitive to all seven antibiotics contained in the small white paper discs. The bacteria on the right are resistant to four of these seven antibiotics. Photo: Dr Graham Beards, 2011, CC BY-SA 4.0

This brings us to another problem: resistant bugs travel fast. No matter where they develop, with modern travel they can spread around the world within days. The WHO also published a list with 12 pathogens that pose the greatest risks. This list includes Neisseria as well as the well-known and much-feared ‘hospital bug’ methicillin-resistant Staphylococcus aureus, or MRSA.

Relief from this dire situation might come from unexpected sources, like the technology honoured by the Nobel Prize in Chemistry 2017: cryo-electron microscopy, or cryo-EM. With the help of this new method, researchers can ‘see’ “proteins that confer resistance to chemotherapy and antibiotics”. This method was difficult to develop, and it leaned heavily on the experiences from X-ray crystallography and classic electron microscopy.

Often in research, being able to ‘see’ something is the first step of understanding its function, hence the strong interest in imaging technology in the life sciences: if a researcher can ‘see’ the workings of a resistance-inducing protein, he or she can start working on strategies to inhibit this process. Cryo-EM is especially good at depicting surface proteins, i.e., the location where infections or gene transfers usually start.

At the same time, optical microscopy is moving ahead as well, being able to ‘watch’ proteins being coded in living cells.  The Nobel Prize in Chemistry 2014 was dedicated to the breaking of the optical diffraction limit. Stefan Hell developed STED microscopy, American physicists Eric Betzig invented PALM microscopy, and both were awarded the Nobel Prize, together with William E. Moerner, “for the development of super-resolved fluorescence microscopy”. Shortly after receiving the most prestigious science award, Stefan Hell combined STED and PALM microscopy to develop the MINFLUX microscope: the very technology that can show proteins being coded. All these methods together will result in a “resolution revolution” that may contribute to the development of new classes of antibiotics.

Nobel laureate Ada Yonath during a discussion with young scientists at the 2016 Lindau Nobel Laureate Meeting. Yonath has been studying bacterial ribosomes for many years. Photo: LNLM/Christian Flemming

Nobel Laureate Ada Yonath, who was awarded the 2009 Nobel Prize in Chemistry “for studies of the structure and function of the ribosome“ with X-ray crystallography, is currently researching species-specific antibiotics. Her starting point is that many antibiotics target bacteria’s’ ribosomes, “the universal cellular machines that translate the genetic code into proteins.” First, her team studied the inhibition of ribosome activity in eubacteria, i.e., ‘good’ bacteria. Next, she extended her studies to ribosomes from multi-resistant pathogens like MRSA. Her goal is to design species-specific drugs, meaning specific to a certain pathogen. These will minimise the harm done to the human microbiome by today’s antibiotics, resulting in a more efficient cure and a lower risk of antibiotic resistance, because fewer bacteria are affected.

Another attack strategy is to look for new antibiotic agents in places that never seemed very promising. For example, in 2010 the Leibniz Institute for Natural Product Research and Infection Biology in Jena (Germany) published a new antibiotic agent found in the soil bacterium Clostridium cellulolyticum. It belongs to the group of anearobic bacteria, a group that has long been neglected in the search for antibiotics. “Our research shows how the potential of a huge group of organisms has simply been overlooked in the past,” says Christian Hertweck, head of Biomolecular Chemistry. Just recently, scientists at the Imperial College London and the London School of Hygiene and Tropical Medicine have treated resistant Gonorrhoea bacteria with Closthioamide, the agent from Jena. They found that even small quantities were highly effective in the Petri dish; clinical trials will follow.

Yet another research strategy is to make antibiotics more ‘resistant’ to resistance formation. For instance, it has taken 60 years for bacteria to become resistant to vancomycin. Now, researchers at The Scripps Research Institute (TSRI) have successfully tested an improved version of vancomycin on vancomycin-resistant Enterococci that are on the WHO list of the most dangerous pathogenes. This improved drug attacks bacteria from three different sides. The study was led by Dale Boger, co-chair of TSRI’s department of chemistry, who said the discovery made the new version of vancomycin the first antibiotic to have three independent ‘mechanisms of action’ to kill bacteria. “This increases the durability of this antibiotic,” he said. “Organisms just can’t simultaneously work to find a way around three independent mechanisms of action. Even if they found a solution to one of those, the organisms would still be killed by the other two.”

Drug resistance can ‘jump’ between pathogens

Unfortunately, researchers and bacteria are not the only combatants, and this fiercly fought battle is not confined to clearly marked battlegrounds. Increasingly, multi-resistant bacteria can be found in our food, mostly due to the use of antibiotics in animal farming, and even in our natural environment. One such troubling example is Colistin, an antibiotic from the 1950s, which had never been widely used in humans due to toxic side-effects; however, in recent years it has been rediscovered as a last-resort antibiotic against multi-resistant bugs. Since it is an old drug, it’s also inexpensive and widely used – on pig farms in China.

As expected, Colistin-resistant bacteria developed in pigs, which was first discovered and published in 2015. But what makes this resistance perilous is the fact that the relevant gene is plasmid-mediated, meaning it can spread easily from one bacterium to another, possibly even from one species to another. In 2015, this resistance gene, called mcr-1, was also found in pork in Chinese supermarkets and in a few probes from hospital patients. Only 18 months later, 25 percent of hospital patients in certain areas in China tested positive for bacteria with this gene: resistances start spreading at unprecedented speeds.

Another highly disturbing example are large quantities of modern antibiotics and antimycotics found in the sewage from pharmaceutical production in India. In warm water, many bacteria find ideal conditions not only to live, but also to adapt to these novel antibiotics by quickly becoming resistant. Already travellers returning from some developing countries are considered a potential health threat, because many of them are unwitting carriers of multi-resistant pathogenes.

Since the discovery of Penicillin in 1928 by Nobel Laureate Alexander Fleming, the battle between bacteria and antibiotics is fierce and ongoing. This battle is fought in the laboratories, the hospitals and doctors’ offices all over the world, with some people seeming about as determined and creative as their opponents.

But resistance-breeding grounds like Chinese pig farms or sewage pipes from pharmaceutical companies present yet another battleground and call for a strategy that needs to be innovative as well as multifaceted. Only last week, a United Nations ad-hoc group met in Berlin to discuss these challenges. To sum it up: most of us do not live next to Indian sewer pipes, but the resistant bacteria bred there may reach us all. 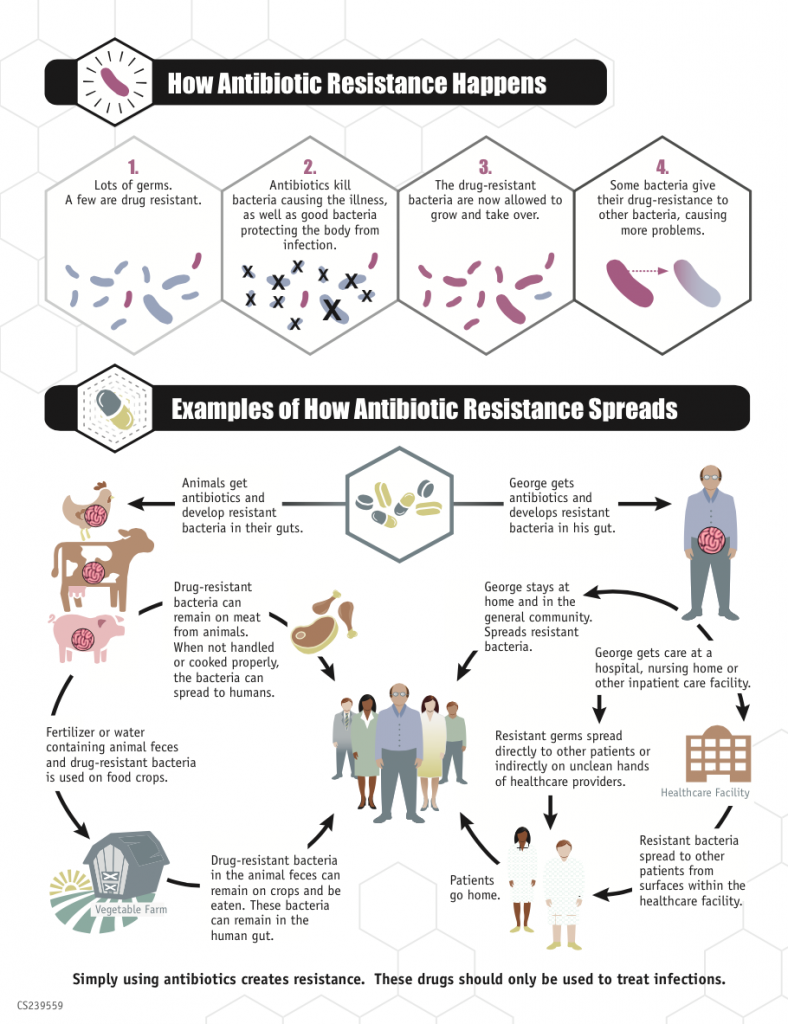