Molecules at Near-Atomic Resolution
Back

The Nobel Prize Award Ceremony is traditionally held on 10 December, the day Alfred Nobel died in 1896, and the Nobel Week in Stockholm is arranged around this date. The three new Nobel Laureates in Chemistry are all expected to attend: Jacques Dubochet, Richard Henderson and Joachim Frank. They are honoured for their contributions to the development of cryo-electron microscopy, or cryo-EM. Besides their scientific achievements, it is also worth looking at their respective personalities – they are all real characters. And although all three are very different indeed, they have one thing in common: They were all asked countless times by their colleagues why they were pursuing a seemingly ‘hopeless topic’. As we can see this week, sometimes it pays off to work on subjects not many people are interested in.

The Francophone Swiss Jacques Dubochet describes himself on his website as the “first official dyslexic in the canton of Vaud – this permitted being bad at everything.” Apparently, his reading problems caused his school grades to slide so much that his parents sent him to a boarding school to pass his federal maturity exam. “I was a terrible student and now I’m a Nobel Laureate: any questions?” he says and smiles – Dubochet is always good for a joke.

Another funny incident: A few weeks after the Nobel Prize announcement in early October, Dubochet was at a conference at EMBL in Heidelberg, the very institute where he developed his famous method to produce vitrified water for cryo-electron microscopy. Now as he entered one of the labs, he saw a cryo-electron microscope standing there and commented: “Now, this is a wonderful machine, but, unfortunately, I forgot what it can do.” Everybody laughed, because he is one of the main pioneers in this field. 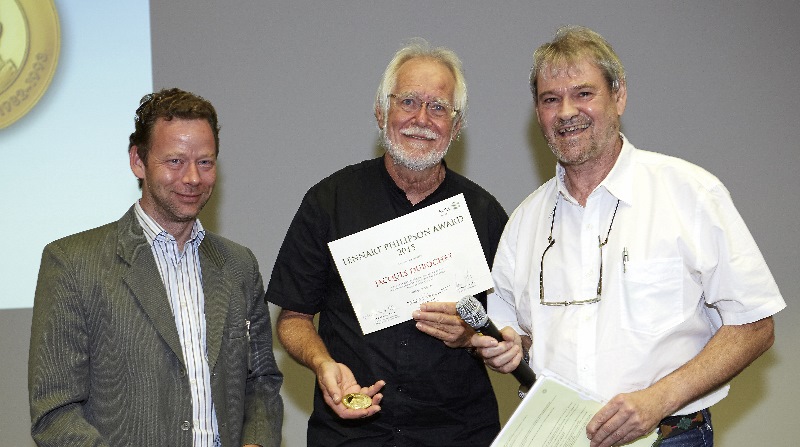 A long-time challenge for cryo-EM had been the fact that the natural environment for most molecules is water, but water evaporates in the microscope’s vacuum. Freezing is one solution, but then the water crystallises, distorting both the sample and the picture. Now Dubochet came up with an innovative approach: He would cool the samples so rapidly that the water molecules had no time to crystallise. This left the molecules in a ‘glass pane’, freezing them in time, direction and in their natural shape. These cells weren’t alive anymore, but in a close-to-living state.

Though he’s an excellent scientist, Jacques Dubochet is also a man of many talents. “He has a unique power to pull his audience in,” says Marek Cyrklaff, Dubochet’s former EMBL colleague and long-term friend. “And he has a special structure of thinking, like being a dual person in one body,” Cyrklaff continues. “On the one hand, he’s a hardcore physicist, on the other, a top philosopher. The latter helps him to see far ahead, have visions, the former allows him to approach these goals in a structured way.”

He is also spontaneous, unconventional and “against all dogmas, in science and politics alike.” During his twenty years at the University of Lausanne, he has “devoted a lot of effort to the curriculum ‘biology and society’, and Lausanne at that time was unique in developing this curriculum for all our students,” as Dubochet himself explains on the telephone with Adam Smith from the Nobel Foundation. “It was not the kind of additional piece of education, it was a core programme in the study of biology. (…) The idea of this course is to make sure that our students are as good citizens as they are good biologists.” He still teaches in this programme, and he says that it’s very close to his heart. He’s also a member of the local council of Morges, where he lives with his wife. The day he learned that he was now a Nobel Laureate, he went to a council meeting in the evening. 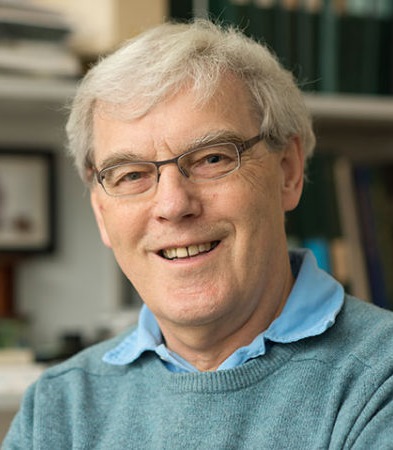 Richard Henderson is originally from Scotland and has worked at the MRC Laboratory of Molecular Biology now for over 50 years. Photo: MRC-LMB

Richard Henderson attended the same EMBL conference in November 2017 as Dubochet.  In a pre-dinner speech, Werner Kühlbrandt, Max Planck Director in Frankfurt, described his time in Cambridge where he received his PhD at the MRC Laboratory of Molecular Biology – and where Henderson had his own research group and later became director. “Richard never missed any of these occasions to meet and ‘have a chat’, as he would put it,” Kühlbrandt says, and “the discussions would continue at the lunch table, usually with Richard scribbling diagrams and quick calculations on the paper napkin.” Marek Cyrklaff also remembers Henderson never sitting in his office, but usually standing in the hallway and discussing projects with his colleagues.

If people now start to wonder when the LMB researchers ever finished their ground-breaking work, “the answer is very simple,” Kühlbrandt explains: “They talked to each other most of the day, but then worked doubly hard for long hours into the night.” He describes Henderson as “kind and helpful,” if strict and straight, as well as “a great optimist” – and to develop high-resolution cryo-EM, he needed to be an optimist.

Electron microscopes were believed to be suitable mostly for dead matter, because the powerful electron beam destroys biological material, and the specimens inevitably dry out in the microscope’s vacuum. Henderson started to tackle these problems in the early 1970s: He used a weaker electron beam and glucose solution to prevent the samples from drying out. In 1975, he was able to publish a low-resolution model of bacteriorhodopsin, a membrane protein. But that wasn’t good enough for him. Fifteen years later, in 1990, he succeeded in generating a three-dimensional atomic model of bacteriorhodopsin.

Richard Henderson describes himself as a ‘Scottish country lad’. When asked about “the biggest misconception” about his field of study, he replies: “That it is a boring technique rather than a minor art form.” 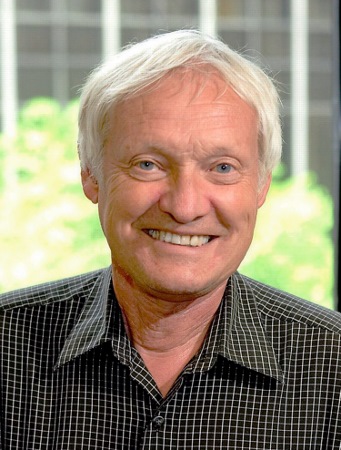 Joachim Frank is a German-American biophysicist. He was born in Germany during World War II, received his education in Germany, and moved to the US in the 1970s. Photo: Columbia University

Talking about art forms: Joachim Frank is not only a world-class scientist, he is also a published author. He has written numerous poems, short stories and three (to date unpublished) novels. On his website ‘Franx Fiction’, there is a selection of his published works. Under ‘Nobel Prize‘, he writes how a stranger recognised him in the New York City subway and asked: “How come you still take the subway?“ According to this blogpost, the most important perk for Frank is the fact that he doesn’t need to write any more review articles: “Assignments like this make sense if you want to add an epsilon increment to the chance of winning the Nobel Prize. But, as I said, I’m already here.”

In an interview with the Austrian newspaper Der Standard, published three days before the Nobel Prize in Chemistry was announced, Frank explains his motivation to write fiction: “It’s all about balance. Without my writing, I would feel very isolated. The world is such a beautiful and complex place, and science only has limited access to its wonders. Science is dominated by strict rules which preclude emotions, and I would never allow my emotions to influence my research. So, to balance out my life, I write fiction and take photographs.”

In his research, Joachim Frank developed an innovative image processing method, between the mid-1970 to mid-1980s, in which an electron microscope’s fuzzy two-dimensional images of many molecules are analysed and merged to reveal a sharp three-dimensional structure. For this purpose, his team at Wadsworth Center in Albany, New York, devolped the image processing programme SPIDER. With this tool, the researchers were able to generate very detailed images of ribosomes, and Frank studied these, among other proteins, for three decades.

In 2014, Frank was awarded the Benjamin Franklin Medal in Life Science, and a video from the Frankling Institute explains how his science knowledge also adds to his artistic appreciation of the world. In the video, Frank explains how once, driving through the woods, “this idea occured to me, that in every cell of every leaf of every tree, there are ribosomes doing this thing,” and he shows with his hands the ratched-like motion of ribosomes that he discovered. “And it made me realise that I’m the only one who has this epiphany right now, because nobody drives around with this kind of appreciation.”

Frank, Henderson and Dubochet will meet in Stockholm on 8 December for their Nobel Lectures and two days later for the Nobel Prize Award Ceremony. They have known each other for years, and now they will share this memorable week in Stockholm. 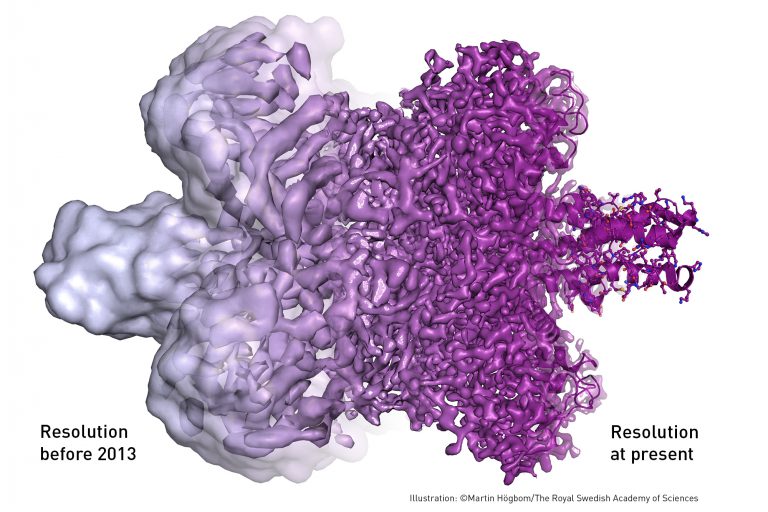 The resolution of electron microscopes has radically improved in the last few years, from mostly showing shapeless ‘blobs’ to now being able to visualise proteins at near-atomic resolution. This is why the magazine Nature chose cryo-EM as the Method of the Year 2015. Illustration/Credit: Martin Högbom/The Royal Swedish Academy of Sciences